By Bryan Hay and Jill Spotz 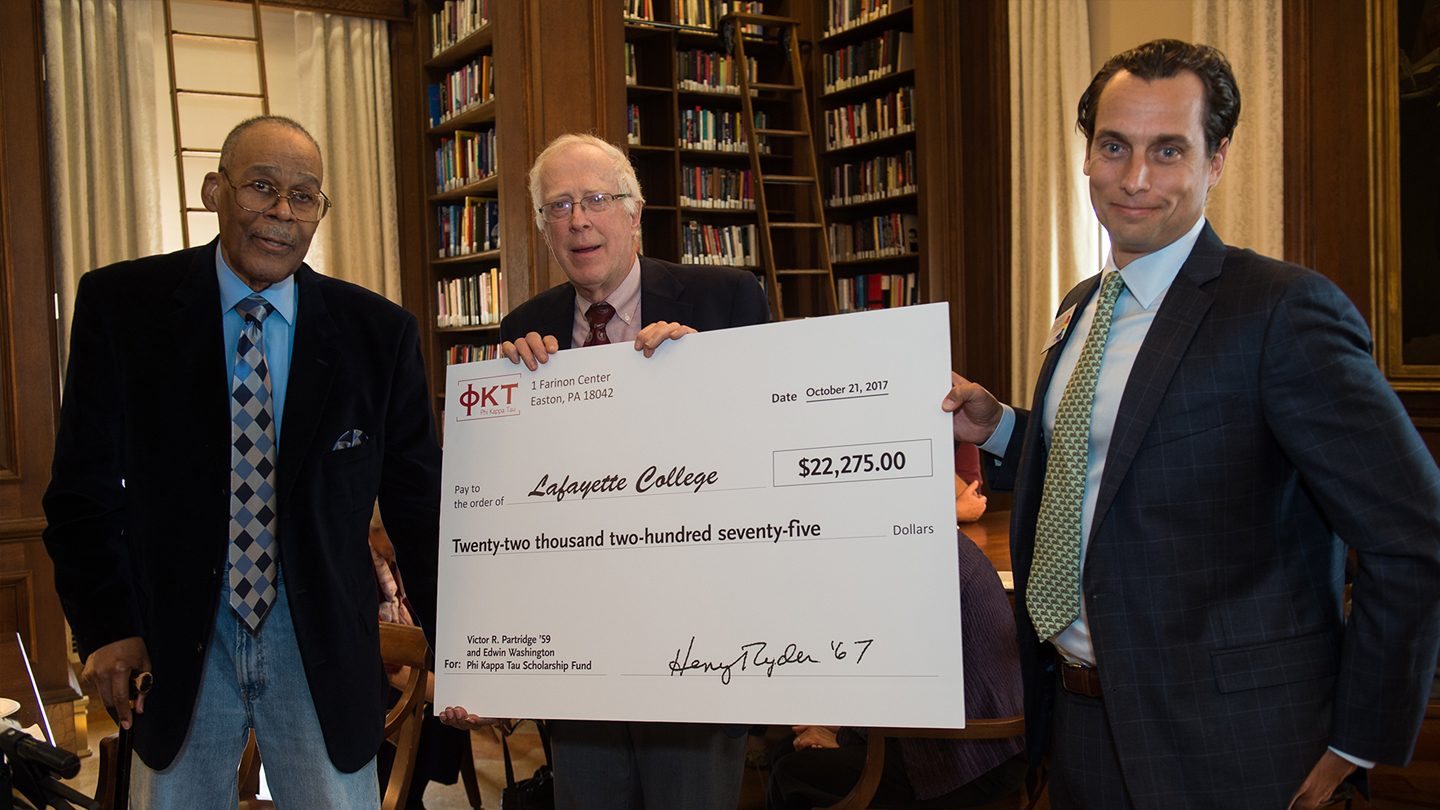 Phi Kappa Tau brothers brought their passion for equal rights to life when, in 1956, they invited two African American students, Victor Partridge ’59 (now deceased) and Edwin Washington ’59, to join the fraternity. When the national fraternity refused to allow Alpha Omicron to accept Partridge and Washington, the chapter advocated for a constitutional change to allow chapters to initiate brothers of their own choosing, regardless of race. Unfortunately, the amendment failed. As a result, in a unanimous vote, the brothers of Alpha Omicron resigned from the national fraternity and formed a local fraternity, Delta Sigma. Two years later, the national Phi Kappa Tau organization recanted, and the brothers returned to Phi Kappa Tau.

Phi Kappa Tau was disbanded at Lafayette in 1974, but one brother, Henry Ryder ’67 P’00’01’05, launched an effort to grow a small fund that had remained and accrued interest since the fraternity’s closing to support students in need. Ryder’s fundraising efforts paid off. He was able to garner support from fellow brothers and grew the account to more than $26,000 to establish the Victor Partridge and Edwin Washington Phi Kappa Tau Scholarship Fund.

“I am proud of the brothers who supported [our] effort in 1956,” explains Ryder. “They had the fortitude to stand by what was right. Equally so, Victor and Ed were trailblazers, even though I know Ed would humbly disagree. This scholarship exemplifies, what I believe, the finest hour of the fraternity’s long history. They took a stand for something they believed in. Today, I am equally proud of the brothers who are helping to support this scholarship.”

The Phi Kappa Tau scholarship will ensure that Lafayette is affordable for outstanding applicants. As with all scholarships, which are available to applicants regardless of race, the Phi Kappa Tau scholarship will enable students to learn from peers of diverse backgrounds. “The historic stand that the Alpha Omicron brothers took to champion inclusivity during the pre-Civil Rights Act era is viewed with admiration by our community,” said President Alison Byerly at an on-campus event in 2017. “I appreciate the way in which you are finding opportunities to continue to partner with Phi Kappa Tau brothers to bring the best to Lafayette.”

During the Live Connected, Lead Change Campaign, alumni of several fraternities stepped up to provide support for the next generation of Lafayette students.

Chi Phi alumni created a scholarship fund to provide training and leadership to students through awards and stipends managed by local Chi Phi leadership and the Division of Campus Life. They established a second fund to support the physical structure of the original, historic fraternity house, built in 1909.

This is what good looks like when the school and students come together with the support of alumni. There’s a desire by alumni to do this in conjunction with the College.”

Delta Kappa Epsilon supported an extensive renovation to the fraternity’s house and created an internship fund to commemorate the 160th anniversary of the fraternity at Lafayette. According to Michael De Lisi ’03, DKE alumni endowed the fund to support undergraduates pursuing summer research and career development opportunities, which aligned with the College’s InternShift program.