“If there’s data, there’s a way for a statistician to make an impact,” says Trent Gaugler, associate professor of mathematics.

While this may be a neat and tidy way to sum up how statistical expertise can help apply a wide range of analytics tools across virtually any field, Gaugler simply wants his students to see that statistics has big value and can be used in areas from government to big business.

So, whether it’s collecting statistical information from surveys sponsored by NASA and done by the U.S. Army Corps of Engineers to study response to sonic boom, studying the effects of strawberry micronutrient powders in overweight adults for a nutrition publication, or helping Lehigh Valley Health Network determine if laser treatments are a safe option for burn scars, Gaugler enjoys the opportunity to prove every day that statistics is used everywhere.

On a small campus like this, it’s natural for students and colleagues to approach a statistician and say, ‘Hey, I’ve got this problem. Can you help me out?

“Sometimes it’s helping people think about their data in different ways, or helping them refine the questions that they can plausibly answer. Sometimes people have only been trained in a narrow set of models or a set of analytical techniques, and you can bring a broader perspective to the table.”

And while it’s predetermined that a background in mathematics and statistics go hand in hand, being a statistician, at its most elementary level, may simply mean noticing patterns in daily circumstances and drawing conclusions about those patterns. On a larger scale, statisticians may spend months or even years conducting studies before they can produce meaningful analysis. Statistics has its own policies and procedures all based on simple mathematical principles.

For Gaugler, it’s using that foundation—as well as the opportunity to be involved across many disciplines—that gets his wheels turning.

“What drew me to this field is the fact that it’s built to apply right to other disciplines. And I love that, because I can talk to people in psycho acoustics one day, nutrition the next day, biology the next day, psychology the next day … and I’m doing all this work, and I get to see all the research. I get to see what the people are doing in psychology, and I get to see what the biologists are doing. Even when there’s no experimentation, there’s data, and you can still make meaning of that data. And that’s the role of the statistician.” 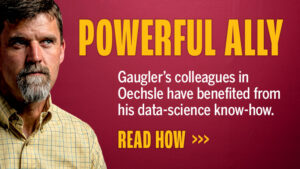 Gaugler also enjoys lending a hand when it comes to getting involved in research and projects being spearheaded by his peers across campus, noting that there’s data across the obvious scientific fields, but then there’s also data across history, data across English, and, of course, data across athletics.

“On a small campus like this, it’s natural for students and colleagues to approach a statistician and say, ‘Hey, I’ve got this problem. Can you help me out?’ I’m always happy to do it because that’s what I love doing. That’s what I love about my job.”

And though Gaugler has been a dedicated member of the College’s Mathematics Department since 2014, he says that the most rewarding opportunities and projects are the ones that allow him to learn a new technique and keep him on his toes.

“It would be easy for me to say, ‘I’m going to be a researcher who specializes in Model X, and all I’m going to do for my whole career is tweak Model X.’ A lot of people do that and build careers that way,” he says. “I like to get involved in topics I’ve never heard of. It keeps me fresh and learning new techniques.”

You never know what Gaugler will be up to next. Learn more about his current and past projects:

THE RESEARCH: Since 2008, Gaulger has collaborated with researchers from Penn State, Tetra Tech, and Gulfstream Aerospace Corporation to assess the impact of blast noise on communities near U.S. Army installations. He provides statistical analysis on how the community responds to sonic boom noise and compiles all the information into a report for NASA. 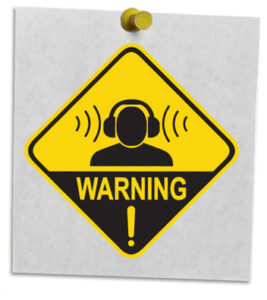 THE GOAL: To help NASA understand an acceptable noise level for supersonic flights that wouldn’t annoy local residents. “We measured instructiveness, because the Army doesn’t want to be a bad community member and cause complaints.”

HOW THEY DID IT: “Our group included a bunch of psycho acoustic experts, and we would go out into the field and monitor noise,” Gaugler says. “Then the psychology folks would measure the psychological side, which is the annoyance to the noise.” They started with munition detonation then moved to aviation noise, then moved to analyzing sonic booms. 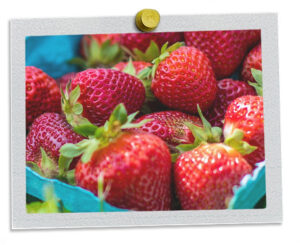 THE RESEARCH: Along with five other researchers, Gaugler looked at data from a randomized, controlled crossover trial with middle-aged adults with elevated cholesterol and BMI. The study was funded by the California Strawberry Commission.

THE GOAL: To prove whether the consumption of strawberries may provide benefits for the lowering of lipoproteins associated with high cholesterol.

HOW THEY DID IT: Trial participants consumed measured doses of freeze-dried strawberry powder in four-week supplementation periods separated by two-week compliance breaks. Blood samples were obtained on two separate days and averaged for a study-entry baseline.

THE RESEARCH: Along with three other researchers, Gaugler looked at data collected through Lehigh Valley Health Network’s Burn Center, which was exported through programs used to filter the data and made easier for statistical analysis.

THE GOAL: To determine whether laser treatments (which improve scar appearance and physiology) are actually a safe option for burn scars.

HOW THEY DID IT: Four hundred and fourteen patients who had undergone at least one laser treatment in the outpatient burn center since 2012 were analyzed and their electronic medical records reviewed. Data looked at common adverse effects, postoperative complication rates, and used the Vancouver Scar Scale for measuring scar appearance over time.

THE RESEARCH: Gaugler helped both the Lafayette field hockey and football teams with projects that can possibly help improve game performance. 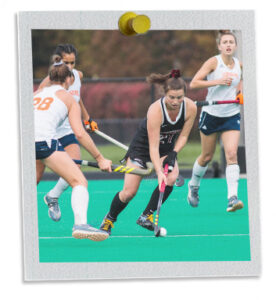 THE GOAL: For field hockey, each of the players wears a chest monitor that tracks everything about their movements and physical statistics. “The monitors track everything—literally to the one hundredth of a degree of latitude and longitude, their precise location on the field—every second, I know where the athletes are. I know what their heart rate is. I know what their velocity is.”

For football, the goal was “to build a dashboard, using their data, to try to predict when they should go for the fourth down.”

HOW THEY DID IT: For field hockey, “I’m working with a student to help the field hockey team visualize and analyze that data.” 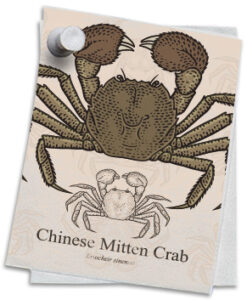 THE GOAL: To find out if the Chinese mitten crab would become invasive in the United States.

HOW THEY DID IT: “Megan and Andrea’s was a cool project because they tried to publish the paper, and they got a lot of feedback that they’d want to see more statistics. When they reached out to me, we thought creatively. There was a lot of survey data and a lot of qualitative analysis—thinking about the way you’re measuring people and how you’re measuring things. We did some spatial mapping. The data was fairly simplistic, but it wasn’t easy to analyze, so we had to be creative with our statistical approaches.”