Students pause during a hike in the Cayambe Coca Reserve, near Papallacta, Ecuador, where local ecologist Estaban Suarez describes the various páramos (ecosystems) through which they passed as they descended from 14,200 feet above sea level to about 2,500 feet.

Study abroad is essential to a global education. Students are immersed in an experience that combines academic rigor with experiential learning; they encounter new and unusual perspectives and examine their own cultural viewpoints. 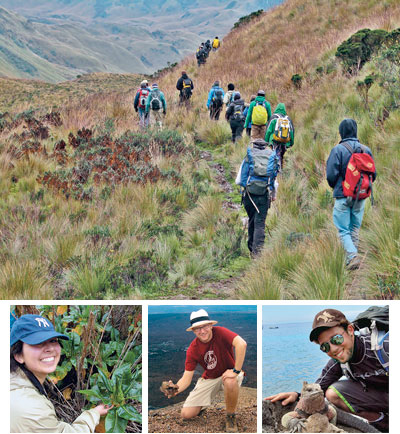 As students descended from the higher altitudes in Cayambe Coca Reserve, the temperature and the vegetation changed. Dafna Charles ’13 (left) noticed the unusual bud and mucous on Rumex tolimensis, togro. During a hike, near Volcan Sierra Negra, Galapagos, Chris Kelly ’13 (middle) examines basalt altered by fumarolic activity, and Tyler Germanoski ’12 takes a close look at an unfazed Galapagos marine iguana.

Adding a mixture of disciplines ratchets up the value.

Professors and students from several study-abroad courses that provide this opportunity agree that the mingling of knowledge and perspective from different academic fields adds another dimension.

“Team-teaching these courses is extremely important,” says Lawrence L. Malinconico, associate professor of geology, explaining that faculty collaboration not only exposes students to different materials, but also different methods of observation. “The potential intellectual areas that can be explored in these global settings are usually too numerous for the expertise of a single faculty member.” 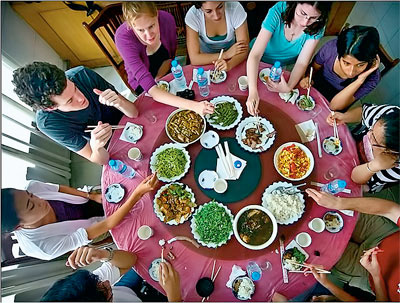 During their visit to Dandong, China, a border city with North Korea, students tasted a variety of traditional foods.

The majors of students in the course went beyond geology and biology to include computer science, neuroscience, mathematics, chemical engineering, policy studies, psychology, mechanical engineering, and more.

“I have always been a naturalist, mesmerized by the earth around me, but in the past this consisted mainly of ecological knowledge,” says Chris Kelly ’13, an international affairs and geology major. “This trip cemented geology as a new and exciting way of understanding the past by looking at the topography and structures where we stood.”

Malinconico says that the interaction of different points of view is important: “We often get questions that we as scientists would not have anticipated, and it allows all of us to see things from a new perspective.” Sunderlin agrees, “When students team up to learn together they often get a lot more out of the course. As they come to appreciate intellectual study from different disciplinary perspectives, they open their minds to what is fascinating about the world. As they realize they can continue to place themselves in positions to gain these perspectives, they become life-long learners and that is at the core of the liberal arts ideal.” 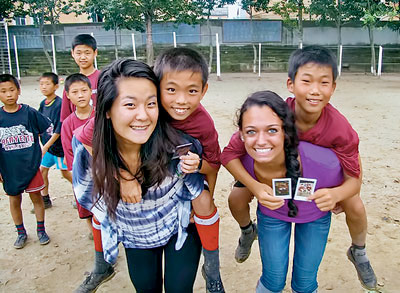 Ellen Song ’13 (left) and Camille DeNardo (daughter of Arlina DeNardo, director of financial aid, now a student at Vanderbilt) enjoy playing games and interacting with children at a middle school in North Korea.

Lafayette is the first American college or university to offer a for-credit study program for students to visit North Korea. Taught by Seo-Hyun Park, assistant professor of government and law; Allison Alexy, then assistant professor of anthropology and sociology; and Paul Barclay, associate professor of history; students experienced these cultures for two weeks. Organized in conjunction with Pyongyang Project, a nonprofit organization based in Beijing, the trip included interaction with Korean and Chinese university students.

The group included students with majors in chemical engineering, psychology, government and law, biology, international affairs, mathematics, and anthropology and sociology. They studied the history and politics of East Asia from 1945 to the present and examined how the countries’ contemporary politics, economies, and cultures fit into an increasingly interconnected world.

With the guidance of an anthropologist, political scientist, and historian, students explored the relationships among these three nations rather than looking at them as bounded nation-states with isolated cultures. They experienced different cultures and investigated variations of socialism, capitalism, historical memory, identity politics, ideology, and the nature of freedom.

Students compared how the Korean War was depicted at the Victorious Fatherland Liberation War Museum in North Korea with museums in South Korea and China.

“The students benefited from seeing the multiple perspectives and methodologies by which we could study Asia,” says Park. “They also saw us asking questions not only to the group but among ourselves, which pushed everyone to better elaborate on the logic of their arguments and to consider alternative viewpoints.”

By visiting museums depicting the Korean War in all three countries, the North Korean one shown left, Museum of the War to Resist U.S. Aggression and Aid North Korea in China, and one in South Korea, they observed how historical events are represented in different cultural contexts.

“Students learn a lot from people of their own age group,” says Alexy. “Interaction with people from radically different backgrounds provides a learning experience that a professor just cannot teach.” They could see that the professors didn’t always agree on everything, adds Park, and “that is what makes the study of Asia interesting and exciting.” 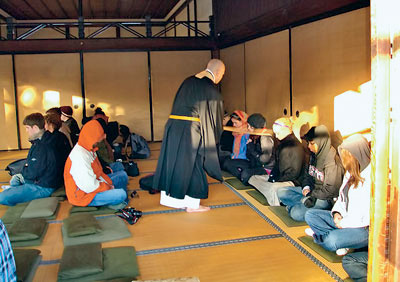 Students experienced meditation lessons at Kenninji Temple, a 12th-century Zen Buddhist temple in Kyoto, including the austerity and simplicity of sitting on the floor in an unheated building with 40-degree temperature outside.

The majors of students in the Japan course included economics, mechanical engineering, biology, music, and international affairs. “Our discussions took exciting and unexpected turns due to the multiple interests of the students,” says Larry Stockton, professor of music, who taught the course in 2010. “The methodology is enhanced by watching others absorb and discuss the material.”

Having the opportunity to interact with students from other majors was important to Gavin Hobbs ’12, a mathematics major. He says his contribution came from his knowledge of military history rather than his major. “We visited several castles in Japan including the famous and largest — Himeji. But my favorite is another smaller castle that I think was more defensible. Some students were surprised at my perspective, and so I explained the reasons.” 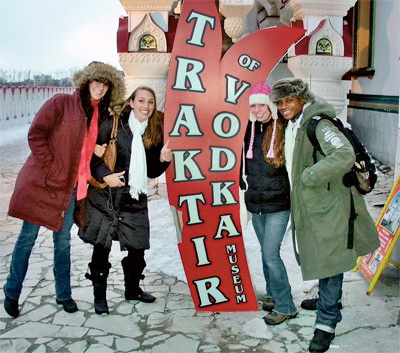 Sarah Swienckowski-Eckhart ’13 (L-R), Tatiana Logan ‘13, Emily Melvin ’12, and Glenford Robinson ’13 explored a traktir (restaurant) and attached museum with exhibits on the history of vodka, first produced in Russia in the late 9th century from the distillation of fermented grains or potatoes.

A fellow traveler, Kelley Reslewic ’12, an international affairs major who has studied Mandarin Chinese including a semester in the IES Beijing Language Intensive Program in China, says: “A situation with students from a range of academic majors and interests is my favorite way to learn. Everyone brings something different to the conversation. An art major can point out the aesthetic beauty of something while an engineer gets us thinking about how it was constructed. This is why I love Lafayette so much; there is a lot of this type of collaborative learning going on.”

Ikegami says that learning about non-Western culture and language is important for living in today’s global society. “The 19th century was an era for European countries; the 20th century was dominated by the U.S. and Russia. In the 21st century, Asia will be a huge market for industries, and it will be a dominant economic and political power. In order to live in this century, non-Western languages are essential.”

Indeed, Lafayette has responded to this shift by broadening study-abroad offerings to non-European locations and increasing the variety of foreign languages taught. At least 75 percent of students in the bachelor of arts program study a foreign language (see article: A-Salamu Alaykum (Arabic greeting meaning “peace be upon you”). 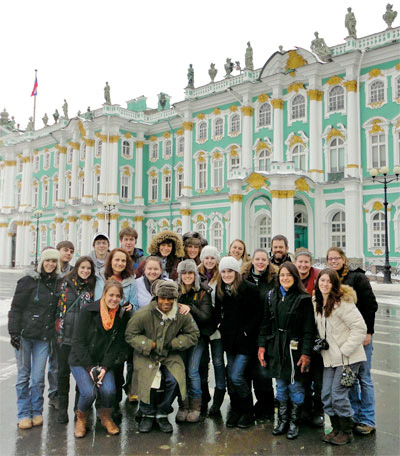 Students visited the Winter Palace in Saint Petersburg, the official residence of the Russian monarchs from 1732 to 1917.

“While the study of cultures and socio-political institutions of Western Europe still occupy a central place within Lafayette’s curriculum, the balance of global power has shifted since the end of the Cold War,” explains Michael Jordan, director of international and off-campus education. “Our students’ academic interests reflect this change; we see a growing interest in Asian studies and languages, for example, as well as the Middle East.”

Sanborn and Sinkevic team-taught the Russia course on campus, which included a one-week trip to that country, funded by a generous gift from the parent of a student.

“The lectures extended beyond our individual fields,” says Sinkevic. “We combined the aesthetic and structural values of works of art and buildings with the historical and political circumstances under which they were made. The students studied a foreign culture in a complex, multifaceted, and yet approachable way.”

“When you are surrounded by people of different backgrounds and intellect, learning takes on a brand new face,” says Glenford Robinson ’13, a neuroscience major. “My academic focus proved useful when interacting with other students in studying the works of art because I used my analytical skills to bypass my bias and evaluate the core components and ideas that made up the masterpieces.”

More then 50 percent of Lafayette students study abroad for a semester, summer, or an interim session. Within the last five years, that number has increased by 10 percent.”

Many professional and academic fields are now global or international in nature. Employers and graduate schools place a high value on cross-cultural competency. “One of the key components of Lafayette’s core identity and purpose is ‘to educate highly promising students and promote the intellectual and personal maturation required for global citizenship,’” says Jordan.

Sanborn emphasizes: “At the foundation of the liberal arts ideal is the notion that education is not only a preparation for life, but also IS life. Speaking a foreign language or being forced to communicate without knowing the dominant language, being a visitor in another country and culture, seeing art, architecture, and street life for oneself — all of these experiences are mind-altering and important for our students.”

Jaisohn Was Champion for Korean Independence

In 1884, when a group of conservatives allied with the Manchu rulers of Imperial China seized control of the Korean government, Philip Jaisohn (class of…

* Arabic greeting meaning “Peace be upon you.” Expanding foreign language offerings, particularly such nontraditional ones as Chinese, Japanese, and…