Walk around campus, and you’ll likely see students, faculty, and staff clutching tall paper cups or travel mugs filled with their favorite steamy caffeinated elixir (especially before 8 a.m. classes). It’s not just at Lafayette College, of course. America’s coffee habit has become part of the collective culture, as people of all backgrounds and professions use the beverage as a ritual to start their day.

If you’d visit Rebekah Pite, associate professor of history, in her office or nearby home, you’d likely find her sipping a morning beverage as well, but one of a different variety.

Pite drinks yerba maté, the most popular caffeinated beverage in South American history, and centerpiece of her most recent research project. Her interest in the culture surrounding the drink and its history prompted her to apply for a Fulbright Fellowship in 2015. She received the prestigious grant, awarded to those whose motivation is to increase cultural understanding between the United States and other countries.

Pite spent nearly a year—July 2015 to June 2016—in Buenos Aires, Argentina, studying yerba maté, a stimulant drink made from the leaves of a holly-like tree indigenous to a region that encompasses parts of Argentina, Brazil, and Paraguay.

“One of the interesting things is it’s still basically produced in the same way it was in the pre-Colonial era, long before Europeans came to the Americas,” says Pite, whose areas of concentration are Latin American history, food studies, and women’s and gender studies. “While coffee, tea, and chocolate all became popular global drinks, yerba maté really didn’t. Yet, it’s still immensely popular in regions of southern South America, and I wanted to learn more about that.”

Because it contains potassium and B vitamins, yerba maté earned the reputation as a health drink. In fact, Pite says historically it was served to gauchos (cowboys), soldiers, and school children to supplement their diets, which is why you can find it in the health food aisle and as an ingredient in some energy drinks on the U.S. market today.

What Pite finds particularly fascinating is the way South Americans serve the beverage. The leaves of the maté plant are placed in a gourd-like container that is then filled with hot water. It’s customary for friends and family members to share the beverage, taking turns sipping the drink through a communal metal straw. Although it’s a popular morning beverage, yerba maté also is often the center of a late-afternoon ritual that fosters friendship and dialogue. 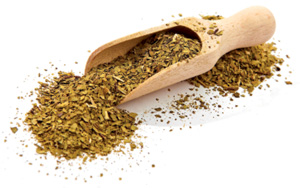 “It’s not a custom that we have here, so I was intrigued by it,” says Pite, who tried maté for the first time while in Argentina in 2001. “If you go up to a group of people drinking maté, they will generally offer it to you. Especially in maté regions like northeastern Argentina, it would be very rude not to offer, and they might be offended if you don’t partake. As someone who teaches food history and is interested in this idea of how you can create a community that’s inclusive or exclusive through shared food and drink, I thought maté would be an interesting thing to study.”

During her time in South America, Pite, who is fluent in Spanish, traveled to different regions to research the evolution of the beverage and cultural shifts surrounding it that occurred over time. She delved through archives at the national library in Argentina and medical school at University of Buenos Aires. She traveled to Misiones, the province of Argentina where they cultivate yerba maté, and conducted archival research and ethnographic observation, a practice anthropologists use, to understand locals’ relationship with the beverage.

Pite also visited Uruguay, which despite not being able to grow the yerba maté plant itself has the largest per capita consumption of the drink. “The Uruguayans are said to have a third arm because they tuck thermoses filled with hot water for maté under their arms to walk or bike around,” she says. “They drink maté all the time. It’s part of their national identity. I think there’s a keener sense of keeping with the past and tradition in their capital city of Montevideo, unlike Buenos Aires, which is more of an aspirational and cosmopolitan city and has a stronger coffee culture.”

Pite, who is teaching a class in food history at Lafayette this fall, says her interest in the topic was sparked during her childhood. “My dad’s side of the family is Jewish, and many of our family celebrations and gatherings revolved around food,” she says. “It was a connection to that ethnic identity. And my mom had a cookbook of recipes of the world, and every week we would choose one to cook. She encouraged my sister and me to get to know different communities of people across the world through cooking and eating their foods. Preparing and sitting down to share meals together was really important to her—and is now important to me.”

The connection people forge through food is an ongoing theme in Pite’s work. She has received many accolades for her book, Creating a Common Table in Twentieth-Century Argentina: Doña Petrona, Women, & Food (University of North Carolina Press, 2013). While in Argentina this past year, Pite produced and promoted a Spanish-language version of her original work, which focuses on Doña Petrona, Argentina’s most influential and beloved female culinary expert. Petrona is considered a national treasure there: think Betty Crocker, Martha Stewart, and Julia Child rolled into one. 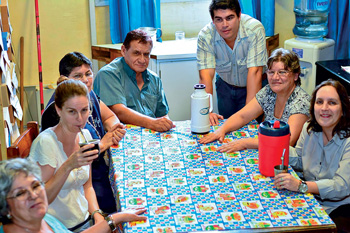 Prof. Rebekah Pite shares a round of maté with the archivists and librarians at the Archivo General de la Gobernación de Misiones in October 2015.

“It wasn’t just translating it into Spanish,” Pite says. “The English version was far more of an academic audience and people who may not have been familiar with Doña Petrona or Argentine history. The book for an Argentine audience had to be different. It was a big undertaking but worth doing and deeply rewarding because of the impact Doña Petrona had in Argentina.”

The Spanish version came out in April 2016 and was followed by an avalanche of positive media attention. Pite was interviewed for several newspaper and magazine stories, and also appeared as a guest on radio shows as well as the popular TV program Otro Trama, which is akin to CBS’s Sunday Morning program. “It was a real honor for me to get that reception,” Pite says. “She is a national symbol, and I could be interpreted as an outsider studying their legend. I’m grateful it was so well-received there.”

Translating the book wasn’t the only time Pite’s language muscles were flexed. Pite, who has studied Spanish since middle school and has also lived in Mexico and Spain, co-taught a graduate course on gendered histories of work and everyday life with Valeria Pita, a professor at University of Buenos Aires’ Interdisciplinary Gender Institute.

“There is more lecturing there, and so I had to teach a doctoral seminar entirely in Spanish,” Pite says.

Pite’s Argentinian colleague appreciated the cultural exchange. “It was a very rich experience working with Rebekah,” Pita says. “We had to learn to combine two ways of teaching, two institutional traditions, and two languages.

“The students benefited by learning from a teacher who brought new strategies to the class.”

Pite’s passions have become a family affair—her husband and two children, ages 11 and 7, joined her in Argentina and traveled with her to Uruguay and southern Brazil. At home, they also sometimes join her for a round of yerba maté.

“My kids like it—although they add sugar because it has a bitter flavor,” Pite says. “My husband and I drink maté together on the weekend when we have more time. It gives you an excuse to pause and put down your work or your cellphone and be with family, friends, or neighbors. I think it’s an antidote to our frenetic, busy lives.”

Pite offers her Lafayette classes yerba maté—communal straw optional. “Some are very enthusiastic about it, and some are grossed out,” she says. “But I think it’s important to know the history of it and pique people’s interest.”

The drinking of maté is steeped in protocol, not unlike a Japanese tea ceremony. Maté is often a group activity where participants sit in a circle. A server, called a cebador or cebadora, fills the maté cup, often a gourd, with yerba, leaves from a celebrated South American tree. A full cup is then passed from right to left around the circle. In warmer climatés, such as Paraguay and Northeastern Argentina, some people drink maté with cold water, herbs, or juice. In colder climatés, sugar or orange peel may be added to sweeten or flavor the infusion.

Below are some tips for participating in this ritual:

Do not touch the straw or bombilla after you recieve the maté from the server. If it gets clogged, tell the cebador or cebadora, but do not stir as it would both clog the filter at the end of the straw and offend the server, whose skill is keeping the maté flowing.

Use your lips to draw up the infusion, not your tongue. And if you’re sick, politely decline to participate in
the circle.

Drink it up! The maté cup will always be passed to you full, and if you accept it, you will pass it back to the server empty. Do not take a sip and then pass to the person
next to you. Serving is the responsibility of the cebador
or cebadora.

It is OK to take your time, but try not to keep others waiting for more than a few minutes. If you focus on talking rather than drinking, someone may laughingly
tell you: “The maté is not a microphone.”

Slurping is allowed, even encouraged at the end. It signifies enjoyment to the last drop, so go for it.

No whining. Maté is about relaxing and being with friends so don’t complain if it is too hot or too bitter or not to your liking. Sharing maté is an honor, a gesture of intimacy
and trust.

Don’t say “thank you.” That is, unless you’ve had enough. A “gracias” when returning the maté to the server is a signal to stop passing you maté. But do say thank you when you’re done as your hosts have invited you to partake in an honored tradition.