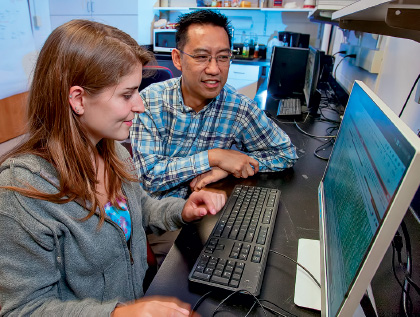 Assistant Profesor of Biology Eric Ho and Catherine Newsom-Stewart ’18 are working on a project that will create a worldwide accessible database of plant virus genomes to help in the research and design of virus-resistant crops.

Geminiviridae is a crop killer whose agricultural reign of terror extends around the globe, wreaking particular havoc in developing countries. While the tomato may be its most common prey, the geminivirus hit list numbers fruit, vegetable, and fiber alike.

Making matters worse, traditional tactics such as pesticides and plowing under crops are often unsuccessful in combating this villainous virus. Part of the problem is that the geminivirus is not a single enemy—it’s an extended family of crop killers, numbering more than 300 species, with new strains emerging all the time.

Our best hope for eradicating the geminivirus lies in the work of genetic researchers like Eric Ho, assistant professor of biology. Ho first began studying the virus during his postdoctorate work as a scientist for a prominent DNA-sequencing company before joining Lafayette College in 2014.

The first step in defeating any enemy is to understand that enemy. But for genetic researchers seeking to study the geminivirus, this has been much easier said than done.

Problem number one is the sheer number of species. We’re talking multiple genera (begomovirus, mastrevirus, etc.), a variety of transport insects, more than 70 different countries of virus origin, and an alphabet of host plants ranging from Abelmoschus esculentus (okra) to Zea mays (corn).

Complicating matters further is the frequent existence of satellite or helper viruses. Diversity may be a boon to academic communities, but it’s certainly a bane to virus eradication efforts.
Problem number two for an aspiring geminivirus genetic researcher is the data. Unfortunately, like the geminivirus itself, the data is all over the place. The genome and associated descriptive information is strewn across multiple online databases at best and buried deep within scientific journal articles at worst.

But all that’s changing, thanks to efforts of Ho and his genome browser for the Lafayette College geminivirus team.

You see, Ho is not your typical research biologist. He’s also got a foot in the computer science world. “Today’s biology is an interdisciplinary science in which mathematics, physics, and computer science are highly relevant to major biological discoveries, such as sequencing of the human genome,” Ho explains.

Ho embodies the hybrid thinking needed to solve today’s complex challenges. That’s why Lafayette hired him as its first computational biologist. And that’s why he was just the person to helm the effort to create the world’s first one-stop online resource for geminivirus genetic analysis.

As Ho is quick to assert, in today’s world, “Besides cash, data is now king.”

But the genome browser for geminivirus is much more than just an online database. It’s a comprehensive toolkit for genomic analysis of the crop-killer virus, replete with search, visualization, and annotation tools.

Perhaps in a different era such a resource would have been kept behind institution walls to create competitive research advantage. Ho, however, recognizes that collaboration is as crucial as cross-disciplinary thinking in defeating complex challenges such as the geminivirus. As such, the genome browser for geminivirus will be an online resource available to all genetic researchers via gbg4v.lafayette.edu.

Of course, even one as multitalented as Ho needed a lot of help to bring this open geminivirus resource to fruition. Biology majors Lyssa Diarra ’18 and Caroline McCauley ’17 played vital roles in assembling the massive data set that Ho subsequently transformed into an online database. Ho’s key yearlong collaborator on the project, however, was biology major Catherine Newsom-Stewart, ’18.

Newsom-Stewart transferred to Lafayette College in search of the biology research opportunities reserved for Ph.D. students at her former school, University of Rochester. But before she ever set foot in a Lafayette classroom, opportunity found her instead.

Newsom-Stewart was taking a summer tour when Ho emerged from his office to offer his assistance. Twenty minutes later, he was enlisting hers.

After proving herself in the fall, Newsom-Stewart began working with Ho on the geminivirus database project as independent research over winter break and spring semester and then as an EXCEL Scholar last summer. Now, little more than one year after their fateful encounter in Kunkel Hall, this partnership has produced a critical bioinformatics resource in the fight against a deadly agricultural virus.

Newsom-Stewart’s contribution to the geminivirus project went far beyond extracting DNA sequences and descriptive information from countless journal articles. She also got her first taste of genetic analysis, constructing phylogenetic trees, graphs that document the evolution and relationship of the various geminivirus strains.

“If we can discover an encoded protein or gene that allows the geminivirus to change its DNA so rapidly, maybe we can figure out how to stop them,” says Newsom-Stewart, who’s moving on
to her honor thesis and then hopefully a Ph.D. in either genetics or molecular biology.