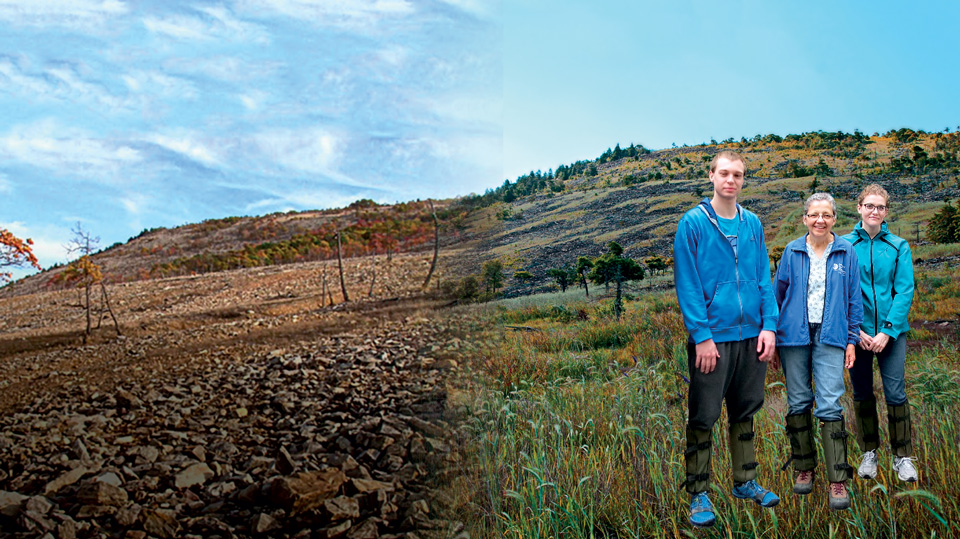 Everybody loves a great comeback story, especially Mother Nature. And 25 miles northwest of Lafayette College in Palmerton, Pa., an inspiring tale of ecological reclamation is being written. While this story has many heroes, some of the biggest are microscopic bacteria. These transformative microbes are the focus of Biology Professor Laurie Caslake’s latest research. They’re also the reason Caslake and biology and arts double major Megan Mauriello ’19 found themselves donning a variety of protective garments last summer, including snake gaiters.

To properly tell this story, however, we must first rewind to 1980. After nearly eight decades, the New Jersey Zinc Company ceases operations at its smelting factory in Palmerton. Left behind: 255 acres worth of rocky waste and a toxic cocktail of heavy metals in the air, water, and ground. Not to mention thousands of acres of dead vegetation.

Less visible, but equally problematic: much of the bacteria needed to recycle organic material and trigger new growth were killed too.

So what was dead stayed dead, leaving the contaminated soil free to erode into nearby creeks and rivers. By 1982, the Environmental Protection Agency had declared the remediation of the former zinc factory environs a federal priority. The Palmerton site bore the dubious distinction of being one of the largest Superfund sites this side of the Mississippi River.

Given the hilly terrain and scale of the site, removing and replacing the soil was not viable, so the focus shifted to repairing and rebuilding it instead. Unfortunately, the initial revegetation efforts in the 1990s faltered. While the area greened, fungal disease, foraging animals, and invasive plants conspired to inhibit the desired tree growth. Erosion continued while a new issue grew: unwanted uptake of the toxic metals by invasive plants and trees (and consequent animal consumption) resulting in further contamination. Long-term prospects for the Palmerton site looked pessimistic. 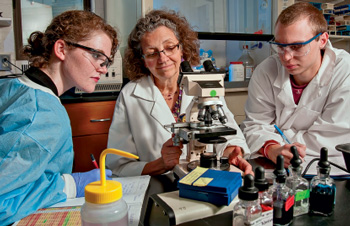 But in 2002, a new macroscopic hero emerged: the Lehigh Gap Nature Center (formerly known as the Wildlife Information Center). After purchasing 450 acres of Palmerton Superfund acreage, it set forth a more natural, prairie grass-driven plan to not only revegetate the landscape and curb erosion but to transform it into a wildlife refuge and environmental education center. The LGNC efforts proved successful, and within five years, the long barren moonscape transformed into dense grassland.

Meanwhile, below the ground, an unheralded set of microscopic heroes had also been hard at work for some time. Demonstrating their highly adaptable nature, some Palmerton bacteria became resistant to the heavy metals, further aiding the revegetation effort.

Caslake’s peers have been studying the chemistry of the Palmerton site since the 1970s, exploring the negative relationship between heavy-metal concentrations and overall levels of microorganisms in the soil. A 2007 study went deeper, identifying a strain of heavy metal-resistant bacteria (Alcaligens eutrophus) and quantifying their presence.

But no one had yet explored the molecular nature of the heavy metal-resistant bacteria. What are the genetics that allow them to survive in such a toxic environment?

“We thought that was a gap that we could fill because we have the technology here on campus to do that,” notes Caslake.

Fast forward to summer of 2016. Here we find Caslake and Mauriello at the top of the access-protected Palmerton ridge, thanks to Jennifer Lansing, an environmental scientist working with the LGNC, and her four-wheel drive. Sporting the LGNC-supplied snake gaiters as protection from resident copperheads, our intrepid Lafayette research team secured its first soil samples.

Back in the lab, under Caslake’s tutelage, Mauriello cultured the collected bacteria in petri dishes and measured the levels of cadmium-resistant bacteria. While the soil contains numerous heavy metals, initial research is spotlighting cadmium given its toxicity, abundance in the Palmerton soil, and past research focus.

“The students have a really easy time identifying with this project. They understand the environmental impact of contaminations and things like that.”
–  Professor Laurie Caslake

First question up: How have the levels of cadmium-resistant bacteria at the Palmerton site changed since the 2007 research where they were first isolated? An increase in bacteria and decrease in cadmium would help corroborate the visual evidence that the soil reclamation efforts have continued to progress over the last decade.

The team is also investigating how the level of cadmium-resistant bacteria varies by soil horizon (depth) and how this relates to the actual cadmium concentration. Over time, efforts to build up the top-soil as well as the relative organic weight of the toxic metals should cause it to descend.

As one question inevitably leads to the next, Caslake and Mauriello are also culturing colonies of Palmerton bacteria on beds of various levels of cadmium concentration to assess the potential limits of the microbes’ ability to survive. Thus far the bacteria have proved remarkably resilient, surviving at even the highest levels of heavy metal exposure. 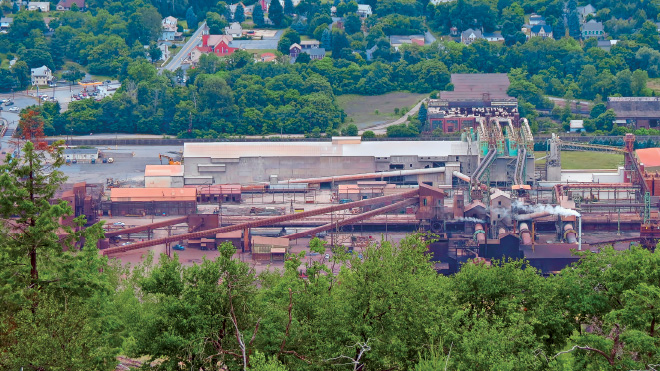 As a Science Horizons program student, Mauriello’s research adventure began last January over the interim break working with Michael Butler, assistant professor of biology, in the field (Metzger Field to be exact) decoding local aviary behavior based on their droppings. This experience allowed her to apply for and ultimately earn the more intensive summer research position, which was funded by a Howard Hughes Medical Institute grant.

While Mauriello’s lab gear protected her from toxic heavy metals, her summer in the lab did expose her to the realities of research including failed experiments, the need to repeat (and repeat), as well as bureaucratic red tape. The team had to secure permits from LGNC, as well as Pennsylvania Game Commission, and is still waiting on federal EPA approval of permits to collect additional samples from the Appalachian Trail area that bisects the site.

“There were definitely a lot more road bumps than I thought there would be,” says Mauriello, who is clearly not deterred. She is applying for a fellowship to the American Society for Microbiology to continue her involvement next summer.

Another motivation for Mauriello’s continued participation: the trailblazing molecular analysis of the heavy metal-resistant microbes is still to come. Once the genetics of the Palmerton bacteria are mapped, they will also be compared to other heavy metal-resistant bacteria such as those found in a French estuary. This in turn has the potential to aid and accelerate future remediation efforts all around the planet.

Realistically, like any research project, it will be years before Caslake answers all these questions. Fortunately, attracting research support from top undergrads like Mauriello is unlikely to be a struggle.

“The students have a really easy time identifying with this project,” says Caslake. “They understand the environmental impact of contaminations and things like that.”

As for Palmerton, the triumphant return of vegetation to the former Superfund site is an undeniable visual testament to how both human and microorganism can evolve to repair our planet.