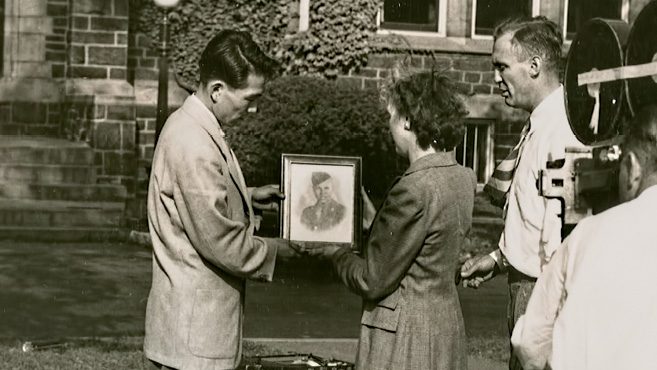 Robert Johnstone was a 19-year-old Lafayette College student who was killed by Japanese soldiers in 1945. His grieving parents decided to honor their son by creating a scholarship in his name. And so, a little more than a year later, the first recipient arrived on campus, hand-picked by the Johnstones. His name was also Robert, and he had served in the war but on the other side. This Robert had been a Japanese pilot. A kamikaze pilot.

This gesture of peace lives on today in the form of the Johnstone Scholarship and is a thread in the fabric of Lafayette.

During its formative years, the scholarship became national news, giving a future to a man America once considered an enemy.

Since then, it has quietly launched generations of students toward successes Johnstone himself only dreamed of.

His Lafayette story begins when World War II still raged across Europe and the Pacific. In America in 1944, racial intolerance toward men and women of Japanese ancestry was at its zenith; more than 120,000 people of Japanese descent lived in American-made concentration camps on the West Coast.

But Johnstone didn’t subscribe to the hatred of the age. He was too enlightened for that. In fact, he’d been so bright his teachers allowed him to skip the last half of his senior year in high school, and he enrolled at Lafayette in the spring semester of 1944. The 18-year-old, fair-haired youth came from Downingtown, Pa., with plans to become an engineer and the idea that “a better understanding among nations would remove the causes of the conflict,” his father wrote in a letter to the College. 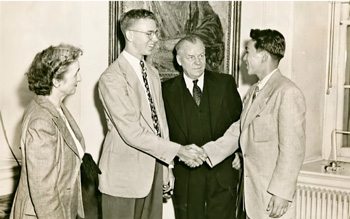 Nishiyama with the Johnstone family

Johnstone was drafted by the U.S. Army that September. He could have used his college-student status to obtain a deferment, but Johnstone refused. Despite his pacifist views, he felt the strong pull of duty to his country. He went to Georgia for basic training and eventually wound up fighting the Japanese in the Philippines, putting off Lafayette until his country no longer needed him.

Then, on May 14, 1945, Johnstone disappeared during a battle. The military notified his parents that their son was missing in action. They waited for news.

It arrived a week later. Johnstone had been shot and killed by Japanese soldiers at a reservoir called Ipo Dam while storming a machine gun post. Later that year, then Lafayette President Ralph C. Hutchison was invited to visit the home of the grieving family. There, the boy’s father, also named Robert, made Hutchison a proposal the family had been discussing.

Like many U.S. service members, Johnstone had taken out a $10,000 life insurance policy in the weeks before he died. The payout was 187 installments of $53.60 per month to his father. The Johnstone family wanted to use the funds to create a scholarship in their son’s name.

But more than that, they wanted the funds to go to a Japanese student, and if that wasn’t possible, then someone of Asian descent.

Hutchison took the proposal back to Lafayette’s Board of Trustees. The vote to approve it was unanimous.

When the media reported the news of a dead U.S. soldier’s family establishing a scholarship for a Japanese student, many people were shocked. But Johnstone’s father explained: “I established this fund because I don’t think we are going to have peace by settling the war with hatred and hard terms. My wife and I are trying to do our small share by helping other people to keep the peace. Only by goodwill can we win out.”

Nearly 7,000 miles from Easton, on a cold February morning in 1946, Robert Yukimasa Nishiyama was killing time by flipping through a copy of the American Military newspaper Stars and Stripes when he zeroed in on an ad that made his heart pound.

Nishiyama was 22. He was working as a personnel manager in the PX of the U.S. Air Command in Tokyo—his job since the war ended and Allies had occupied his home. It was a far different life than he’d envisioned just six months earlier. It was a miracle that it was a life at all; Nishiyama had planned to be dead.

At about the same time that Robert Johnstone was finishing his first semester at Lafayette, Nishiyama was obtaining an English degree from Tokyo College of Foreign Affairs. After graduation, Nishiyama entered the Japanese Royal Navy. He was made an ensign and assigned to the Kamikaze Corps.

“In America I have found so much openhandedness, the desire to make friends and make a stranger feel at home.”
– Robert Yukimasa Nishiyama

Kamikazes were a symbol of the rabid Japanese devotion to victory at all costs. The pilots committed suicide by flying their Zeroes into Allied ships. Nearly 4,000 of them had died in the line of duty during the war. Some were startlingly effective: When a single pilot crashed into the USS Bunker Hill on May 11, 1945, he killed nearly 400 U.S. personnel. 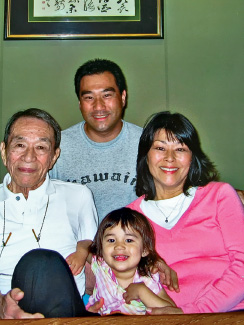 Nishiyama was an odd choice for a kamikaze. He’d grown up near the U.S. embassy and had befriended the children of diplomats. His family gave him the American moniker “Robert,” a name suggested by an American family friend. He read American books and magazines, married Helen Matsuoka Nishiyama, who’d lived in the states, graduated from Stanford University, and chose to study English in college. But in 1945, he shipped to a Japanese base in Korea and prepared to die killing Americans in the only mission he’d ever fly.

That mission never came. On Sept. 2, the Japanese surrendered and canceled Nishiyama’s date with suicide.

The ad in Stars and Stripes was like a dream. A man named Johnstone was offering a four-year scholarship to an American college as a memorial to his fallen GI son—and he wanted it to go to a Japanese man.

“I felt that this dream never would come true for me,” Nishiyama said in a 1949 article in American magazine. “They’d take a civilian, yes; perhaps even an ordinary Japanese soldier; but never a kamikaze—one of those ‘fanatical’ and ‘suicidal’ creatures trained to die!”

That night, his wife persuaded him to apply. “I had always wondered why we had been friends as children, and then had grown up to hate each other as adults,” Nishiyama wrote in a letter to the Johnstones. “I wanted to know if his son … was right when he felt the answer to peace was understanding.”

Hutchison wrote Nishiyama three months later seeking his scholastic records and a photo. Then in August 1946, he received word he’d been accepted as a Lafayette freshman.

Two years later, Nishiyama kissed his wife and 2-year-old daughter, Rhoda, goodbye and boarded a plane for America. “I felt like someone standing in front of a screen door,” he wrote. “I had some idea what was beyond the door, but it was blurred and confused.”

Nishiyama’s coming was big news. Time magazine mentioned him. Life magazine produced a story and several pages of photos of the young Japanese man studying and socializing with other Lafayette students.

When Nishiyama arrived on campus the first day, he went to Hutchison’s office where he met the Johnstones for the first time. Robert Johnstone’s brother, Bruce, also was enrolling at Lafayette as a freshman.

The family was warm and friendly, but Nishiyama was unsure how to speak to them. Should he even mention Robert’s name?

Almost immediately, the Johnstones invited the former kamikaze pilot to their home. He’d be invited to spend Christmas there; they exchanged gifts as though he were a member of the family.

And he slept in their dead son’s room.

It was then that he knew “it would be all right,” Nishiyama later wrote.

He was also afraid about how he’d be treated at Lafayette, but he met with almost no ill treatment.

“In America I have found so much openhandedness,” he wrote in 1949, “the desire to make friends and make a stranger feel at home.”

Nishiyama graduated in 1952 with a degree in international affairs. By then Helen and Rhoda had come to the states. Rhoda, who today is 70 years old and lives in Oakland, Calif., remembers very little of the time. She recalls a dance, her mother in a blue chiffon dress, friendly neighbors.

Nishiyama landed a job with AMP Inc., a Harrisburg, Pa., electrical and electronic components maker. He worked there as a general manager for three decades before he took a job back in Tokyo with TRW, an automotive parts company.

His family remained in the states, and he flew back and forth often to visit. He died in 2011.

“Oh, he loved Lafayette,” Rhoda says. He kept a Lafayette sweatshirt, sang the school’s praises any chance he got, was active with the alumni association, and even returned for a reunion in the late 1980s. “He brought me a Lafayette T-shirt,” Rhoda says.

And he never forgot what he learned from Robert Johnstone.

“Even now I think it’s a people-to-people thing,” he said of the war to The Morning Call of Allentown, Pa., in 1989. “In a limited way I think I’m trying to prove that Robert Johnstone was correct.”

The amount of money varies depending on how well the fund’s various investments perform. The range has run between $800 and $10,000 per year.

His sister, Elizabeth Ramsay, today in her 90s, still receives regular correspondence from grateful Johnstone Scholarship recipients. Robert Mendelson, Robert Johnstone’s namesake, who would have been his nephew, cares for her. Among the stacks of mail at the house is a letter from the latest recipient, Emily Kim ’18.

Kim’s father died when she was young, and she was raised by her mother in a single-income household in Livingston, N.J. She’s double majoring in sociology and anthropology and government and law with an eye toward a career in social justice.

Until recently, Johnstone was little more than a name in her financial aid package, one of a handful of saintly benefactors who contribute toward her tuition. After she learned that she’d been named the Johnstone Scholarship recipient, Lafayette’s financial aid office sent her contact information for the Johnstone family. Kim wrote a letter introducing herself and thanking the family.

“If it hadn’t been for this scholarship and others who’ve donated to allow for my large financial aid package, I wouldn’t have been able to experience any of the wonderful opportunities I’ve received at Lafayette,” Kim said.

When she heard the story behind the scholarship, she was moved. “I hope to pay it forward,” she says, “whether that is by donating my money to help other Lafayette students in the future or simply taking this kindness and passing it along in any way that I can to whomever I may meet.”

Maybe she’ll find a way with her career in government and law. And maybe the recipient will feel as Nishiyama felt.

“I still pinch myself to see if I am dreaming,” he wrote in 1949. “I am actually living this heroic American boy’s life.”