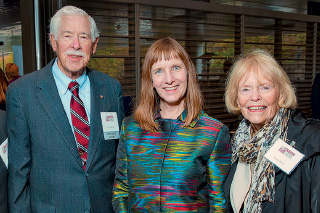 As a first-year student and mere recreational swimmer in 1966, Mike Weinstein ’70 responded to a flier on campus and tried out for the swim team. Five decades later, he returned to Lafayette to dedicate the Weinstein Natatorium, a renovated and light-filled pool for our swim teams and our community, named for Mike and his wife, Jill.

“I really hope all of you swimmers out there will remember this day and remember the old dude who was not only extremely proud of Lafayette but was fortunate enough, and felt it was important enough, to pay it forward to future generations,” Mike said into the microphone. Then he dived fully clothed into the pool.

Mike and Jill’s gift is one of thousands, including major gifts and Annual Fund donations, that are making waves across campus, just two years from the November 2014 public launch of the
Live Connected, Lead Change campaign.

If you’ve visited campus recently, you’ve seen evidence of your philanthropy in every corner. Strolling across the Quad, you’ll see that renovation of its roads into walkways has created a park in the heart of campus. The Oechsle Center for Global Education, the new home of International Affairs and the Department of Anthropology and Sociology, offers innovative classrooms and gathering spaces. The dedication of William C. Buck Hall and the entire Williams Arts Campus represents a nearly 50 percent increase in space that demonstrates our commitment to the arts. This summer, we will break ground on the Integrated Sciences Center, which will also foster interdisciplinary collaborations through its inspired design and its proximity to the College’s other science-focused academic facilities.

Your generosity has allowed us to endow eight professorships and 11 faculty positions, including the Kate and Walter Scott ’59 Chair in Engineering and Richard H. Jr. ’60 and Joan K. Sell Chair in the Humanities. The Scotts’ gift will also augment an endowment fund they established in 1996 to create the annual Marquis Distinguished Teaching Awards, which honor and sustain our faculty’s commitment to excellent teaching. Professor Ian Smith will give his inaugural lecture as first holder of the Sell Chair later this month — a lecture on Shakespeare’s Othello from a nationally recognized Renaissance scholar whom we are fortunate to have at Lafayette. Investments in our living communities are enhancing learning environments outside the classroom.

In fact, the campaign’s early success emboldened us to raise the goal for need-based scholarship support from its original $60 million to $85 million, to support the College’s goal of being able to bring the most talented, deserving students here to study, regardless of their family’s financial means. Already, your philanthropy is inspiring us to imagine a Lafayette that will shape not only the lives of our students but also the very definition of a contemporary liberal arts education.

I am deeply grateful to all who have helped us get to this point. It is inspiring to find that so many who love Lafayette are willing to invest in making the College even stronger in the future. I look forward to the continued success of the campaign, and our continued progress together on the journey ahead.