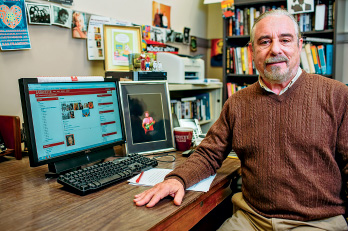 Peter Newman, 43 years after graduating, in his office in Pardee Hall

For orientation this year, first-year students read Between the World and Me by Ta-Nehisi Coates, who describes for his son his life and views on being a black man in America. As we discussed the book, I recalled 1969, my first year at Lafayette. We had grown up with Bob Dylan telling us, “The times they are a-changin,’” and he was right. We witnessed the struggles of the Civil Rights Movement and news of American soldiers dying every day in Vietnam.

For my orientation we read The Autobiography of Malcolm X. In it, Malcolm states, “…if you want something, you better make some noise.”

So we did. In fact, Lafayette experienced one of its greatest periods of activism and change during my first year on campus. We started with issues that affected us directly. Within a week of arrival, we changed the dorm policy to allow 24-hour visitation. Working ahead for our sophomore year, we eliminated Saturday morning classes, mandatory physical education classes, and distributional requirements. We also demanded and received improved food options and portions in the dining hall.

Peter Newman ’73 is a visiting instructor in the American studies program. He teaches Sports in American Culture and a First-Year Seminar called “The 1960s: Causes and Effects.” He taught 12th-grade English at Nazareth High School in Pennsylvania for 34 years. He still wears his hair long.

Then we moved on to more significant issues. In the fall of 1969, everyone knew that Lafayette would become coed; the question was when. The administration scheduled a meeting in Colton Chapel, thinking the venue size would make our numbers look small. We went door to door in every dorm and frat, and it paid off. Every seat and aisle in the chapel were filled as the meeting began. We demanded coeducation for the following year, and in September of 1970, the women arrived.

The College was also working to meet the demands of The Black Manifesto by bringing more African American students, faculty, and staff to Lafayette, a move that was embraced by the campus community. The College opened Black House, now called Portlock Black Cultural Center, a place for African American students. Curriculum changes followed, and during my junior year, I enrolled in Lafayette’s first black literature course, taught by visiting professor Ashley Bryan, the famous writer and illustrator.

In May 1970, the National Guard’s killing of four students at Kent State shocked the nation and galvanized many Lafayette students to join the anti-war movement. Other DJs and I addressed these issues in our radio shows and connected on-air with college stations around the country. We brought anti-war activists, journalists, historians, and politicians to campus to give context to the war and its history, initiated petition and letter-writing drives, and rallied on the Quad against the war. We also put out a strike newspaper, covering stories about the anti-war movement on campus and around the country. While we did not achieve all of our goals, I will never forget the excitement and optimism that we felt in our work. It was a vitally important part of my education.

Forty-seven years later, as I teach my First-Year Seminar on the 1960s (including a unit on Lafayette), canvas neighborhoods and make calls for the election, continually check polls on statistician and writer Nate Silver’s FiveThirtyEight blog, and watch more news than is healthy for me, I realize just how much the activism of my first year shaped who I am, how I see the world, and how important and fulfilling it can be to “make some noise.”