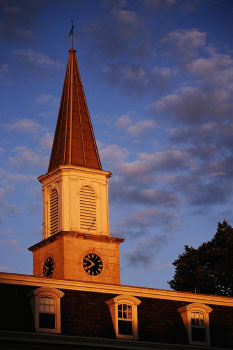 Four years ago, my older son, Jacob ’16, asked if I was going to cry when we dropped him off for his first year at Lafayette College.

“I don’t think so,” I naively said. “I’m going to say goodbye, walk across campus, and go to work.”

Plus, I had made plans to meet him for coffee the next day. Note to parents of future first-years: Do not do this. Donna Krivoski, director of parent relations, says parents need to give their students space to acclimate to campus life those first few weeks without interference. But what did I know? Nothing, apparently, about how at the end of Convocation the bells of South College toll as a signal for parents to depart campus.

As I held my son tight on the grassy apron of Fisher Field, I began to sob. It felt like my chest was being crushed by the weight of the nearby leopard statue, and I couldn’t breathe. My husband and younger son were teary-eyed as well. What the heck is wrong with us? I thought. Lots of parents live several hours or time zones away from campus. Our home is a 15-minute drive.
It wasn’t until the next day that I realized I had underestimated the milestone. It wasn’t about how far we had traveled to campus, but how far we had traveled together: 18 years. We stood both at a finish line and a starting point. His childhood in our home had ended; his journey as an adult into self-discovery was about to begin, and he’d be taking it alone.

It wasn’t intentional, but when I sat down to write this letter, I realized that several of our features are about new life. On page 12, you’ll read about Doug Prusoff ’12, the college engagement manager for Movember, a charity that raises awareness of men’s health issues by encouraging men to grow mustaches. It’s a personal story: Prusoff joined the organization after once helping someone close embark on a new life.

And then there’s the story of Gordon Swanson ’66 on page 30. A missing ingredient in a cocktail led him to a new life—and he’s now working to grow the future of an iconic Thanksgiving fruit.
In World War II, a soldier named Robert Johnstone died. On page 48, you’ll learn how his family used his life insurance policy to give dozens of students new lives in his name.

It’s the fall edition, and fall invokes endings. Yet parents of college students everywhere embraced their sons and daughters this season as they embarked on something new.

My younger son, Ryan ’20, started Lafayette this year, and once again during the close of Convocation the bells resounded in Kirby Field House. I hugged him goodbye and then watched as he strode away with new friends toward the next beginning. This is how it should be, I thought. But I still cried.

May your holidays be filled with laughter and love, and the promise of new beginnings.