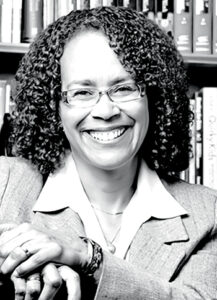 I grew up feeling like I was on the margins. I was born in Harlem and raised in Englewood, N.J, one of the first communities in the nation to desegregate its schools. I was one of nine Black women among 2,000 students attending Lafayette in fall 1970. I’ve grown to realize that being on the margins is actually a pretty powerful place to be. It’s enabled me to live a life as a bridge builder to empower people and connect communities.

Everything I’ve done throughout my career in academia has been about making sure the people around me have the resources they need to live to their highest potential. My goal in life is to help people live their dreams. I’m currently in a role that enables me to build community partnerships and create new relationships in order to make a difference. My work as director and founder of the Social Justice Initiative involves connecting community-based services, participatory research, and education to enable kindred spirits to come together and achieve their goals. When the right people come together at the right time, sheer magic can happen. That brings me the most joy.

The civil unrest in our nation has heightened my commitment to everything I do. It’s further woken me up to the fact that there’s so much to be done. I see how I can be part of that work by continuing to teach and mentor and support those around me. Our sense of what it means to be an engaged citizen is at risk, our sense of humanity is at risk. The impact on me has been profound. This past summer, I felt sad and even on the verge of helplessness, but now I’m stepping out again and doing the work. How could I not?

The Social Justice Initiative has been a total blessing. Our mission is to convene community-based services, participatory research, and education. Our mission isn’t to become experts in any particular area, but to connect and convene and connect kindred spirits.We use four pathways to advance those who want to create a more just world for themselves and their communities. If you follow these, it’s how you’ll get closer to actualizing actual social justice.

These are the four pathways to social justice that I wrote in 2016 and launched in 2017. It’s gotten a lot of traction.

Connecting people with people. My goal in life is to help people all live their dreams. I don’t have a middle name, but if I did, it would be “connections.” When the right people come together at the right time, sheer magic can happen. That brings me the most joy.

What is your most meaningful moment or significant accomplishment?

What has brought me the most pride in life was making my mom and dad proud. That was an incredible gift. They did the best they could do to make me the best I could be. I’ve always been the first to accomplish things—the first woman, the first African-American woman, the first woman of color to receive tenure, the first social worker, a first-gen graduate. It was all possible because my parents said “you can do whatever you want to.”

What is the greatest hurdle you’ve had to overcome?

The greatest thing that makes me afraid in life is being around people who are not woke. It’s like they are sleepwalking through life. They can talk and walk and maybe even say a few of the right things. But they are sleeping through life. They might bump into you and cause you some harm, but they don’t wake up. They just keep moving, and that frightens me more than anything else. Not enough people are really paying attention. I think being able to recognize those people is a hurdle. You might ask hasn’t your hurdle been about being a woman? Or being an African American? Yes, those were hurdles, but those were bumps. That is not the same as bumping into people who are not woke. I’ve worked to learn how to recognize those folks. Realizing who is not woke can be painful, when people aren’t authentically awake and able to tell the truth. If you aren’t woke, you can’t engage in meaningful, sustainable relationships that are mutually beneficial for the long run.

How do you empower those around you?

Connecting people. At Lafayette, I hated the word empowerment—I thought it represented the idea of was white men who gave Black people the right to do things. That’s how I heard it. Now I’ve examined it and reclaimed it. It’s not making them into something that they aren’t—it’s about making sure they have the resources to be the best that they can be. Everything I’ve done is about empowering and connecting, and making certain people around me have the resources to live to their highest potential. To do that, you need to do more listening than talking. It’s a learned skill I’ve had to develop.

Students sometimes say “how can I be like you?” I say you already are. You are doing the best you can do. We are all simply more human than otherwise. They are already like me just by being human.

“It’s all good”—that doesn’t mean it’s all good in this very moment. But it’s the bottom line. I see the goodness of God in everybody. It takes a little longer to see the goodness some versus others. If you really want to connect with someone, you connect with that good piece. That’s what I do. I believe life is a gift. It’s about living fully and loving fully—to live as fully as you can, to laugh as often as you can, to enjoy as many precious moments as you can, to love as many as fully possible. It’s what I believe; it’s how I show up.

First and foremost, everything going on has heightened my commitment to everything I do. It’s further woken me up to the fact that there’s so much to be done. And I can see how I can be part of that work by continuing to teach and do the work. I just love mentoring folks. There is a McDonogh Network scholarship in my name, and so Lafayette students call me for guidance. Students from 1988 that stay in touch with me. I’ve learned what a mentor is all about. Most important, it’s not being the sage on the stage, it’s about being the guide on the side. That to me is what this summer’s unrest has reminded me of—I may not be out on the frontlines. But I’m still doing what I can to bring a sense of humanity back. Our sense of what it means to be an engaged citizen is at risk, our sense of humanity is at risk. The impact on me has been profound. This past summer, I felt sad and even on the verge of helplessness, but now I’m stepping out again and doing the work. How could I not?