double major in Spanish and American studies, concentration in communications
Managing editor at CUNY TV City University of New York and host and creator of the TV show Latinas, based in New York City 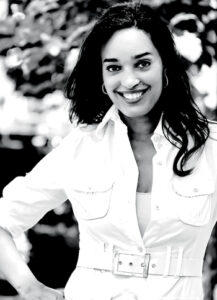 Latinas, my TV program, is in its second season, but it has been brewing in me for a long time. At Lafayette, I did two theses; one was on the underrepresentation of Latinos in mainstream television. The Latino characters I saw on TV were drug dealers or maids. That was not my life experience. It’s what prompted me to write that thesis, and then correcting that wrong became my professional goal. We have Latinas as reporters, as producers, as camera operators. It’s for Latinas, by Latinas.

People have recently spoken up about the lack of diversity in mainstream media. I’ve also noticed that people are now making the extra effort to showcase diversity. I am proud that I don’t have to fake it or now try to create diverse content. I just need to reshare things I’ve already done. I’ve been doing the work all this time, and that is very meaningful to me.

The biggest professional hurdle I’ve faced is convincing higher-ups, often who are not people of color, to allow me to tell the stories I want to tell. At times, I’ve felt a reluctance. I’ve had to work to turn the “no” into a “yes.” When I got a “no,” I’d bring the idea back—I’d reframe it and alter my approach. You sometimes need to see others where they are and be willing to work for what you want instead of shutting down.

Throughout my time in school, I was very aware I was usually not like the others. I felt that I had to do well because of that. It made me try to achieve whatever goal I had in mind. It allowed me to have a mindset that I was not taking no for an answer. I’m still that person, but since Lafayette, my mindset has opened. I’ve encountered different types of people, and I try not to judge other people’s experiences. It’s not easy, but that’s the one thing about me that continues to evolve. I think with age comes wisdom, and you’re able to learn and are more willing to listen.

It got started at Lafayette. I wanted to graduate with honors in both majors. I wasn’t allowed to. I was told I had to pick one. I balked at that. I wanted to graduate with honors in both, and so I had to write a thesis for both. I was told repeatedly that wasn’t a smart decision. That I’d risk not graduating because it was too ambitious. My mind was set. I was able to write two thesis, one for each major. One was on the underrepresentation of Latinos on mainstream television. I became more and more interested in writing those wrongs. Throughout my career, because of that thesis, I have tried to create and produce stories that have shown all types of people. It’s always been personally important to profile all types of minorities positively in any way I could, particularly Latinos, because I didn’t see that type of representation in movies, TV, and magazines. The Latino was always the drug dealer or the maid. I didn’t get that. The people around me were not like that. My sister was in the military, my other sister was in medical school. This was not my experience. This was not the experience of my friends and family and people we know. It’s what prompted me to write my thesis. If I weren’t seeing positive portrayals of Latinos, then other people were not either. And then I made that my professional goal.

One of the people I interviewed for it was a professor at the University of Texas in Austin. I interviewed him and he was well-versed in all things TV. I sent him a copy of the thesis, and he ended up making it required reading in his class. I was honored to have written something that someone would want to use as required reading.

Latinas, my TV program, has been brewing in me for a long time. I never had the opportunity or the position to do it. Until I was at CUNY—I said, let’s do a show on Latinas and they said ok. I searched high and low for everyone in our office who was a Latina; I wanted them to be part of the show—on camera, behind the scenes. We have all types of Latinas who work on the program. I love that we are able to tell their stories. It’s for Latinas by Latinas to inspire and inform.

I have to say it’s social media. There is an immediacy to it, and I like getting the reactions, both the good and bad. If they comment, that means they were watching and they are paying attention. It’s good to know when you are striking a nerve with people, and they are responding. Some people like to just be nasty because they are hiding behind their keyboard. But some people are thankful that they are hearing their story. You don’t always know what is going to be popular among your audience. That’s what brings me joy and pride, having that immediate feedback. I’ve always been someone who likes to learn and think learning is a continual process. It’s not like you graduate from school and that’s it. It’s a continual education. It’s continually keeping your mind open and taking things in. That’s something that I’ve constantly been trying to do in my career and in life.

What is your most meaningful moment or significant accomplishment as it relates to your work for justice and equality?

It’s happening now. A lot of people bring up the fact that there is not a lot of diversity in mainstream media. When that comes up, I know that I’ve been doing this work almost 30 years. Even though I’m not working in a medium or at a station that’s nationally known, I know that I’m bringing diverse voices to my job. And that’s meaningful to me. I’m reading these headlines about how there is no diversity, but I know that I have spent my entire career making sure that happens. On a national level, what I do may not be seen or recognized, and in that sense it’s sad. Because I know I’m not the only one doing this. There are others working to do the same, but we don’t have the national recognition so it may not be noticed. But it’s meaningful to me to know that I’ve been doing the work. I’ve noticed that recently people are making the extra effort to showcase diverse talents. I just need to reshare things that I’ve already done. I was already doing the work. I don’t have to fake it or all of a sudden try to be more diverse. It was a part of what I do every day.

What is the greatest hurdle you’ve had to overcome as it relates to your work for justice and equality?

The biggest hurdle to overcome is having higher-ups that I report to allow me to tell the stories I want to tell. At times, I’ve felt a reluctance. But it’s usually because they didn’t understand the story or they didn’t understand the nuances behind the idea. I’ve had to make them understand and explain why the story was important. Pretty much every story I’ve wanted to tell, I’ve told. I would just come back and re-pitch it. I’d turn the “no” into a “yes.” I’d change up my approach until I would get a yes. And to those people’s credit, I didn’t get a lot of push back. It’s always good to have a plan B, to know how to pitch it again. You sometimes just need to figure out a new approach. When I got a “no,” I knew that I’d bring the idea back—it might be next week, it might be next month, it might be a year from now. But I’m motivated to get a “yes.” I think it goes back to the whole learning thing. You sometimes need to see others where they are at and try to have more of an open mind. I can have a narrow way of thinking, too, it’s about trying to understand them, and respecting that difference, and being willing to trying to work together instead of shutting down.

How do you empower those around you?

With Latinas, we have mostly a Latina staff. I love working with the producers and reporters. When they come up with story ideas, I work with them to develop them further. But I also need to make sure that it’s still their story. They might be telling it in a way that I couldn’t have imagined, because it’s from their perspective and it’s not my experience. Allowing them to do that is empowering to them. And being able to facilitate that makes me happy.

“Keep on keepin’ on—no matter what.” It’s so important to keep a positive attitude. Everyone’s mental health has been decimated with all that’s going on in the world. It’s all about just keeping on keepin’ on and keeping a positive attitude in everything you are doing and knowing that change is on the horizon. We are going to come to a new normal. We need to try and stay optimistic, yet realistic. You can’t wallow in the negativity. You can’t get stuck in that.

It made me revisit my past work and made me realize I had already been creating positive images of diverse people, and that made me happy. I was already doing it, and I’m going to continue on that path. It doesn’t matter where I work—this has always been my path and my mission. I’ve been doing it, and I’ll keep doing it.

For me, my perspective on race just continues to grow. I went to schools and was in settings and environments, where I was not like the other. Or I was one of a very few minority students. For me, I always felt that I had to do well because of that. There was no choice. I knew that very early on in my life. It made me a confident individual. It made me try to achieve whatever goal I had in mind. It allowed me to have a mindset that I was not taking no for an answer. I’m still that person since Lafayette, but my mindset has opened. I’m more open to different people’s experiences and opinions. My experience is my own, and I have to remind myself of that. My experience is my experience, and can’t allow that to be the deciding factor. We all have our own biases that affect how we move through life. We have innate biases, and realizing that makes you more compassionate and able to recognize someone else’s experiences. I’ve become more open minded since my time at Lafayette. I’ve encountered all different types of people, and I’ve expanded my horizons, and I try not to judge other people’s experiences. It’s not easy, but that’s the one thing about me that continues to evolve. I’m still that same person I was at 21. But I think with age comes wisdom, and you’re able to learn and are more willing to listen.