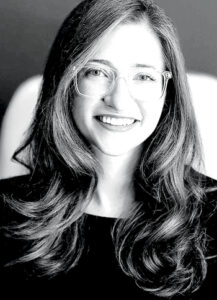 I love empowering people to use their voice so they can advocate for themselves. I’m a first-generation American. My parents came here as political refugees from Baku, Azerbaijan. That’s what led me to work for the New York City’s Mayor’s Office of Immigrant Affairs from 2017 to 2019. I felt it was more important than ever to stand up for what makes our country so great—the stories, dignity, and rights of immigrants. I managed a team of community organizers who created inroads with immigrant communities impacted by legislation like the travel ban, family separation, and threats to DACA. I worked to lift up the voice of the neighborhood activists, making sure I was addressing the grueling nature of on-the-ground fieldwork. Prior to that, I managed a grassroots advocacy for the UN Foundation’s Nothing But Nets program. I trained everyday people how to build relationships with members of Congress to advocate for anti-malaria public health programs.

I am currently pursuing a master’s of social work degree at Hunter’s Silberman School of Social Work to become a therapist and address the growing and glaring mental health crisis in this country.

I believe that social justice work starts with the community you keep. As a white woman, I’ve had to think about how to address my own power privilege in the spaces I occupy. What I’ve learned is what the country is learning now—none of this work matters if you aren’t doing this in your own space. You need to do this with the people you are in contact with every day. How do I speak in a way that elevates other people? How do I befriend people who don’t look like me? That’s how you build bridges. You need to acknowledge what role you play, speak up despite the fear, stand next to people, and lift them up.

What roles/positions have you had that advanced social justice and equality?

At Lafayette, I was awarded the Lafayette Paul Tully Graduation Prize for Public Service work, and that catapulted how I identified myself as a public servant. Most recently, I’ve advocated for paid internships in my graduate social work programs, created a peer support group for young caregivers of someone fighting a chronic illness at an affordable price, in working for the New York City-Mayor’s Office, I worked to end Domestic and Gender-Based Violence for The Met Council for survivors of domestic violence. I was part of the Mayor’s Office of Immigrant Affairs. And in a role with the United Nations Foundation Nothing But Nets program, I taught every day people how to advocate to their members of Congress about public health issues like malaria.

Empowering other people. What does that mean? Connecting people to services, creating community for people to heal and know they are not alone. My role at Nothing But Nets was to manage the grassroots advocacy of the campaign team. I worked to connect with everyday people and helped them organize and meet with members of Congress. Our mission was to get funding for malaria programs in sub Saharan Africa. I loved that work—teaching people how to feel connected to their government officials, helping people to meet their senators and members of Congress, and having that absolutely exhilarating experience of changing someone’s mind and getting them to support an event or program. It was about empowering people to use their voice, motivating them to advocate for themselves—and that was a joy for me. All of that work was going to help mothers and children in subherent Africa to get the funding that they need.

What is your most meaningful moment or significant accomplishment?

There were so many challenges working in immigration during Trump’s first term—the travel ban, family separation, census 2020, and DACA campaign. I managed and supported a team of neighborhood organizers at the Mayor’s Office of Immigrant Affairs. I stood shoulder to shoulder with muslim Americans during this difficult time, and that was very meaningful to me.

It was very challenging figuring out how to be of service during the dramatic transition to the Trump administration. Seeing an attack on immigrant communities in particular was very difficult. I’m a first-generation American. My parents were immigrants—my parents came here as political refugees. I felt really called to find a way to push back against all the very antagonizing rhetoric against immigrant communities. I joined the De Blasio team and worked in the mayor’s office of immigrant affairs. I worked to co-manage a team of neighborhood organizers. Each person on the team manages a specific area and is responsible for owning relationships with that part of the city. I managed those neighborhood organizers. Working in social justice from the management position, I needed to think about how do I support this team? These people were being attacked via the media, via the administration, via discriminatory acts on the street. I also had to think about and address activist burnout that we see. It was a big change for me personally to step out of the bubble of Washington DC. I was now working in a municipal building in downtown Manhattan with very few resources. There was no operating budget. It was all very grassroots. Every single day we’d be getting a news alert that some new executive action was going to take away someone’s rights in our city. Working in city politics, you have to navigate so many things: The Dream Act, family separations, the census. Every week we had to shift our attention. We’d be on the streets handing out flyers, creating events with the public—our work was figuring out how to engage the community and bring community and government together in the same room so those voices are heard. These are communities that don’t typically have representation in government to start with. We would put on an event with community members and representatives from the NYC government to hear what the community needs are. That kind of work hasn’t been done before, we were figuring it out as we went.

What is the greatest hurdle you’ve had to overcome in your work?

To understand that the “work” with communities or clients always starts within your own team, within your own role, and how you relate to the immediate people around you. That means cultivating the awareness to understand how your own privilege resulted in your ability to obtain a role, and working hard to train people you manage to be prepared to move up into your position, and advocating fiercely for those people.

Also, two years ago, I went through a personal and professional shift. My sister had been diagnosed with cancer and I was managing being a caregiver. Oftentimes in your darkest hour, you hear what your dreams are. I really felt I was being called to do more intensive therapy work. I decided to move into direct services work, but that shift was hard for me. Pivoting from this prestigious role, saying that I worked at the mayor’s office – to taking a different path – that was very scary. But I found the strength to leave that job and start from the bottom again. To be a social work intern and to be re-humbled by being able to swallow my own pride and start over. I just started my second year at Hunter. Being affiliated with a CUNY university was really important to me. They have a strong focus on social justice.

I was assigned to work at a family justice center, a one-stop shop for survivors of domestic violence. Victims can walk into a center and can get access to police officers, therapists, housing specialists. I was doing one-on-one counseling and leading a support group – it is really challenging, incredible work. With the onset of COVID, domestic violence rates have skyrocketed. It’s extremely painful and challenging to know there is a real limitation with how much I can support clients during that time. That was my placement for the year, and throughout that whole time, I was continuing to advocate at Hunter. Students were struggling economically. People who lost jobs are looking at the cost of tuition. Even though I thought I was leaving the role of advocacy and becoming a therapist, the advocacy never ends.

How did you empower those around you?

I saw my role as being standing up for social justice and equality—and that work starts with practicing it with the community you keep. It starts with the people you sit with in your office: Asking what’s fair here? How do we make everyone feel safe in this environment? That was really something I truly learned in that role. I’m a white woman, and everyone who was a community organizer was a person in color. So I had to think about the power privilege and how to have self-awareness. How do I create space for someone else on the team to be able to step into this role? What I learned is what the country is learning now—none of this work matters if you aren’t doing this in your own space—as a college, as an institution, as an organization. You need to do this in your space, do that with the people you are in contact with every day. That’s one of the key messages I want to echo – it has to start with your immediate circle, whoever that is. It was Very important to me in my work there. I worked to lift up the voice of the neighborhood activists who I was responsible for managing—making sure their mental health was cared for and that I was doing everything I could to support them.

What short phrase would you offer others to inspire them to have hope?

Be provocative—there are others in the room who will resonate with your words. You can be respectful, but sometimes you have to be that dissenting voice in the room.

It only reminded me and reinforced that I need to be aware of the impact of my words. How do I speak in a way that elevates other people? That willingness to overcome fear and start somewhere by speaking up. It’s how you start to change. How you befriend people who don’t look like you. It’s how you build bridges. Acknowledge what role you play. Speak up despite the fear, stand next to people, and lift them up.

One thing that I have learned since leaving Lafayette is that you never know when you’re going to run into someone from your past, particularly in these challenging times. People are asking for help. Someone I was reconnected with is Caitlin Flood, was the Pepper Prize winner the year I graduated. She was starting a grass roots organization to help women to flee domestic violence during COVID and setting them up with furniture and making them feel like they have a safe home to come to at the end of each day with their children. When you’re young, you have an experience, like college, and then it’s done. You don’t appreciate there is going to be parallels that will keep you connected. Caitlin was my neighbor, we were both government/law and philosophy majors. We hadn’t been in touch for years, but then one simple message on Instagram, and we connected the dots. Suddenly, we were in the Bronx building a trundle bed together. There is that special connection that lasts through time.