“This is what we always dream of, something to help people …”

When Dana Ferraris ’94 received word in July that the U.S. Food and Drug Administration had approved his anti-cancer drug cedazuridine, he could barely contain his excitement.

“For a chemist, it was like winning an Emmy, an Oscar, the Heisman Trophy, and maybe even a Pulitzer all wrapped up together,” says Ferraris, associate professor of chemistry and department chair at McDaniel College in Westminster, Md. 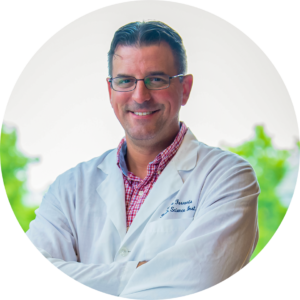 He celebrated the rare achievement, one that can only be fully appreciated by a career medicinal chemist, by uncorking a bottle of Dom Pérignon and sharing a toast to cedazuridine success with his wife.

Ferraris’ bubbly exuberance was more than justified, as a chemist can spend an entire career toiling away to develop life-changing compounds that elude the FDA’s measured approval process. To put it into perspective, only 1 in 5,000 compounds made in the lab make it into clinical trials, and from there only a scant 8% survive through those trials, he says.

Ferraris invented cedazuridine more than a decade ago when he worked as a medicinal chemist at MGI Pharma Inc. The oral drug treats adults with myelodysplastic syndromes (MDS), types of cancer that affect blood cells and marrow, and replaces the need for patients to receive intravenous treatment at a health care facility.

In announcing the approval, the FDA noted its commitment to providing additional at-home treatments during the pandemic and avoiding the need to receive them intravenously at health care facilities.

Distributed under the trade name Inqovi, his drug is combined with decitabine in pill form. The combo delivers a one-two jab at the cancer: decitabine destroys the cancer cell while cedazuridine allows the decitabine to do its job by blocking an enzyme that would otherwise destroy it and keep it from attacking the cancer. “You kind of lose track of it during clinical trials, which can last for years,” Ferraris says. “You never hear about it. It just kind of fizzles away, like a news story.”

About three years ago, when his drug completed its second phase of clinical studies, his work quickly came back into focus.

“Things suddenly looked pretty good. It’s doing the trick,” he recalls. “And there’s an oral dose, so instead of having to go into the clinic to get the treatment with six hours of an IV infusion, you can just give a pill.

“And then phase 3 started, a humongous trial with thousands of patients with the disease. It was about June of 2019 when we heard that the third phase was finished, and we began to get an idea that the signs looked pretty positive. It was just surreal. But this is what we always dream of, something to help people.”

Over the summer, he invited his research students into his world of chemical compounding to work toward discovering drugs to fight COVID-19.

“They’re basically viral proteins that are key components in the reproduction cycle of the virus,” he says. “So if you can knock that out, you pretty much knock out the viral replication cycle, lowering the viral load and more or less curing that disease.”

Masked and working in a socially distanced lab, his five students worked to design molecules to inhibit the life cycle of the coronavirus. “This would be a drug that you could give when the patient is already infected by the virus,” Ferraris says. While their work did not lead to a breakthrough, it provided a rare opportunity to use current data to learn and appreciate the patience and practical experience needed to discover a new drug.

“Drug discovery is a long, tedious process,” he says. “But it has to start somewhere.”

His father was a successful physician, and there was a certain expectation that he would enter the family business.

“I kind of went into Lafayette thinking I’d go the pre-med route,” he recalls. “But I was a bit of a screw-up, and after my first semester there I think I had a 2.7 average. I was able to do the math and realized that there wasn’t enough time to raise my GPA to be competitive for medical school. I would have needed a 4.0 every semester from that point. I needed a plan B.”

His supportive parents instilled in him that there are other ways besides medicine to help people.

“You don’t have to be a medical doctor, they told me,” he says. “Research is a perfectly viable path to helping people, and that’s kind of when I was like, OK, this might be something for me.

“I was lucky enough to get an internship at a biotech company for two summers, the first one working in a biology lab feeding rats,” he laughs. “I knew immediately that’s not what I wanted.”

Good thing for Ferraris is that the same company had a medicinal chemistry group, and his interests shifted there. “I had some phenomenal mentors in that lab who really nurtured me and taught me a lot about organic chemistry,” he says.

“That was one of those moments where you say ‘OK, I can do this for a living,’” Ferraris says. “And I went to graduate school, earned my Ph.D. at Johns Hopkins, and was fortunate enough to get a medicinal chemistry position right away. I loved it. I’ve been doing it ever since.”

Ever since moving to teaching at McDaniel College five years ago, his message to his students is that chemistry “is a very important way to help change and improve lives. There’s no more challenging career on the planet than chemistry.”

It can be an endless quest for a molecular holy grail, but the reward is embedded in quiet, patient discovery, Ferraris says.

“When you become a medicinal chemist, your mindset is finding or contributing to one drug that has the potential to save or help thousands or millions of people,” he says. “You’re always looking for a treatment where there’s nothing else out there.”