“He supported Lafayette passionately
and devoted himself wholeheartedly
to upholding its ideals.”

“OUR GRATITUDE TO FRED KIRBY for a lifetime of service and generosity to the College is boundless. He was a remarkable person in many ways. I will remember with special appreciation the years in which I had the privilege to work with him,” said President Daniel H. Weiss. “Our thoughts are with his wife, Walker, and their family, including daughter Alice Kirby Horton; sons Fred III ’80, Dillard ’81, and Jeff ’84; and Jeff’s wife, Karen ’87.”

Fred M. Kirby II ’42 died Feb. 8. Under his leadership, his family foundation continued a legacy of extraordinary support of Lafayette begun by his grandfather, Fred Morgan Kirby, and carried on by his father, Allan Price Kirby ’15. The support is most evident on campus in the Kirby Professorship in Civil Rights, Kirby Hall of Civil Rights, Kirby House, and Kirby Sports Center, but it has benefited generations of Lafayette students and faculty in ways that reach far beyond these highly visible signs. 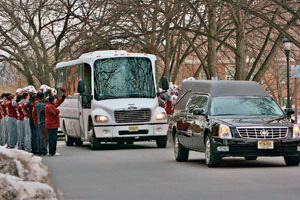 The football team salutes the funeral cortege of Fred M. Kirby II as it passes through campus.

The Board of Trustees saluted him in a memorial resolution “not as a member of a family but as an individual. For what was most memorable about Fred Morgan Kirby II was the depth of his own commitment to Lafayette. . . . In his characteristically understated but effective way, Fred was a leader at Lafayette throughout his life. He was elected president of his class and of his fraternity, and he remained actively involved with both as an alumnus. He and Walker loved to return to Easton to take part in formal and informal gatherings of the Class of ’42. In addition to serving on Lafayette’s Board of Trustees, he was elected a trustee of Zeta Psi Fraternity of North America. . . .

“He supported Lafayette passionately and devoted himself wholeheartedly to upholding its ideals . . . immersing himself in projects and issues that he valued most highly, never losing sight of his goal of making us a better institution.”