Monrovia, 1979. Marcia Bloom Bernicat ’75 is warning a Liberian security officer that his country might be invaded by falling chunks of Skylab. It’s a heady assignment for a graduate-student intern. Debris from the expiring space station misses Liberia, but the bang that doesn’t happen in Africa launches Bernicat’s diplomatic career with a bang. Excited by the importance and the novelty of her Skylab mission, she decides to join the foreign service and help piece together the jigsaw puzzle of world history. 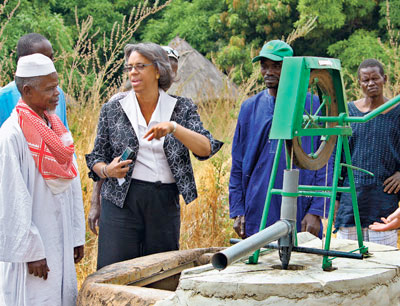 Conferring with the village chief in Segou, Senegal, about a new water pump installed by Peace Corps volunteers.

This year marks Bernicat’s 30th anniversary as an overseas officer for the U.S. state department. She has done everything from helping Mali villagers raise healthier chickens to helping negotiate a non-nuclear pact with India. In 2010, she had a momentous year in her biggest role, U.S. ambassador to Senegal and Guinea-Bissau, neighboring republics in West Africa. She broke ground on a new embassy complex in Dakar and debated corruption on national television with an angry Abdoulaye Wade, Senegal’s controversial president. In the process she polished her reputation as a gracious, tenacious envoy.

Bernicat majored in history and became a student of diplomacy at Lafayette. Mentored by her thesis adviser, Robert Weiner, Jones Professor of History, she became interested in the League of Nations and in the seesawing relationship between the United States and the United Nations, the League’s successor.

A self-described “sheltered kid” growing up in Tinton Falls, N.J., Bernicat stretched her boundaries as a member of the College’s second co-ed class. In New Dorm (now Ruef Hall), she participated in adventures with classmates Denise Statham and Francine Pearlman-Storch, who remain her close friends. They shared pranks, helped each other as resident advisers, and combated sexism. Dealing with male students who basically considered her an invader helped Bernicat sharpen her diplomatic skills. “I learned how to handle a situation that wasn’t warm and welcoming. It toughened me a bit and made me grow,” she says.

After obtaining a teaching certificate in social science, Bernicat envisioned teaching overseas, perhaps at a school supervised by the U.S. Department of Defense. After detouring to a managerial job at Procter & Gamble, she entered the School of Foreign Service at Georgetown in 1978. That’s where she was studying when she interned at the U.S. embassy in Monrovia as a temporary replacement for an economic officer on leave. While she enjoyed delivering the Skylab message, she worried that her background in international finance was too shallow.

“I felt as if they were throwing me into the deep end,” she says. But an ambassador’s deputy calmed and encouraged her: “‘Don’t worry,’ he said. ‘Read through the literature. Ask anybody any questions, including me. And remember, you can’t foul up anything so badly we can’t undo it.’”

“I’ll never forget what he told me,” she says. 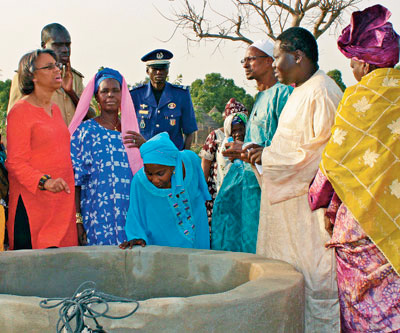 Villagers in Fadiga, Senegal, explain how they are using a new well provided by U.S. government funds.

BAMAKO, MARSEILLE, AND BEYOND

Bernicat started her foreign-service career in 1982 as political officer at the U.S. embassy in Bamako, the capital of Mali. Funding a self-sustainability program that taught farmers how to breed and inoculate chickens was a highlight of the two-year posting. A more personal highlight came when she served as consular officer at the U.S. consulate general in Marseille from 1984 to 1986. There she met her future husband, Olivier Bernicat, a TWA employee who helped find her a more affordable flight to America.

One of the attractions of being a foreign-service officer is access to attractive services. Bernicat benefited from such bonuses during a hitch as principal officer at the U.S. consulate general in Casablanca from 1995 to 1998. Residing in the villa where President Franklin Roosevelt and Winston Churchill held a pivotal World War II conference, she hosted teas in an historic map room and hosted dinners with such history-makers as former President Jimmy Carter. Casablanca left Bernicat with a love of rich Moroccan foods: a blessing and a curse. “I’ve been assigned to too many countries with wonderful cuisine,” she laughs.

Indeed, food played a role in one of Bernicat’s scariest episodes. Walking on a beach in Liberia, she suddenly found herself face to face with a rifle-carrying soldier, an offshoot of the 1979 riots over a proposed increase in the price of subsidized bags of rice. He let her party go with a stern warning. She counted her blessings that “we didn’t surprise him as much as he surprised us.”

Peace played a role in one of Bernicat’s most satisfying accomplishments. As office director for five South Asian countries from 2006 to 2008, she participated in negotiations for the United States to supply India with non-military nuclear materials. The agreement, she points out, helped change the countries’ relationship from “contentious” to “collaborative.” Pleased by Bernicat’s work, the George W. Bush administration appointed her to her first ambassadorship, in Senegal and Guinea-Bissau. 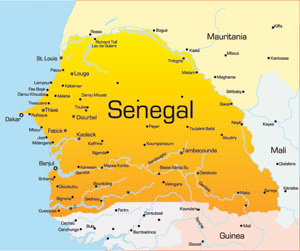 The Senate confirmed the appointment in June 2008, five months before Barack Obama was elected America’s first black president. Obama’s victory was big news in Senegal, a former French colony with more than 80 political parties, a formidable Islamic power base, and a democratic, autocratic president, Abdoulaye Wade.

No stranger to controversy, Wade demanded tourist profits for conceiving the idea for a very controversial project, the high-priced Monument to the African Renaissance outside Dakar, manufactured in North Korea and taller than the Statue of Liberty. For Bernicat, its dedication in April 2010, marking the 50th anniversary of Senegal’s independence from France, was one of many major events during an eventful year. She hosted iftars, meals where Muslims break their fasts during Ramadan. She celebrated the opening of an American-funded school for 59 villages. She attended ground-breaking ceremonies for a U.S. embassy complex and a high-school complex for the children of foreign diplomats. The school will be attended by her sons Christopher and Nicholas, adopted from an Indian orphanage founded by Mother Teresa.

Bernicat’s most ground-breaking task in 2010 was challenging Senegal to meet the terms of a five-year, $540-million U.S. Millennium Challenge Grant for building roads, improving agriculture, and launching enterprise zones. About a month after the monument dedication, she released a statement, published in several Senegalese newspapers, warning that Senegal had to fight corruption actively to receive the money. The warning angered Wade, who had been criticized in 2009 for making a “farewell gift” of nearly $200,000 to an International Monetary Fund official who was departing Senegal. Following its publication, Wade confronted Bernicat during a previously scheduled meeting about Senegal’s electoral process, denouncing her for suggesting that he and his cabinet members were corrupt. The United States, he insisted, was a hotbed of graft. Example A was the Ponzi-scheming financier Bernard Madoff, who “stole more than the budgets of all African states combined.”

Bernicat recognized that Wade felt he had been blindsided by her warning. She tried to settle him by acknowledging that Senegal had made attempts to fight fraud, citing improved methods of soliciting and monitoring bids. Her low-key tactics paid high dividends. Near the end of the conversation, Wade thanked her for a frank exchange befitting friendly countries.

The story might have ended there if the summit hadn’t been filmed. Local television stations aired footage of Wade yelling at Bernicat, and the president’s startling behavior made waves around the world. According to Bernicat, it started the rumor that the Obama administration had removed her from her Dakar post. The rumor was dissipated, she says, by a YouTube video of her entire meeting with Wade, including the president’s verbal olive branch. Some viewers praised Bernicat for keeping her cool, for being the very definition of a diplomat.

Nevertheless, Bernicat feels she made a tactical mistake. She believes she should have released her statement about reducing corruption to one paper rather than several papers. “We were just trying to get out the word,” she says. “Unfortunately, it had the impact of a carpet bombing.” 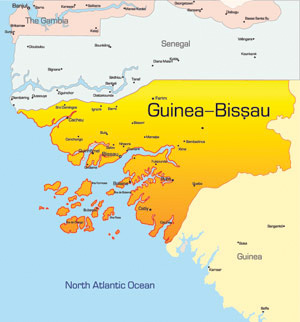 Bernicat faces other challenges in Guinea-Bissau, a small nation with big crises. More than two-thirds of the 1.6 million residents of the former Portuguese colony are impoverished. It’s a haven for drug smugglers, who hide stashes of heroin on a large cluster of tiny islands. Last year, the United States listed the former navy chief of staff and current air force chief of staff as narcotics kingpins. In April, police illegally placed the country’s prime minister under house arrest.

There are signs of hope. The United States gave $300,000 toward Guinea-Bissau’s 2009 elections, where a new president replaced one assassinated that year. Bernicat is particularly bullish on an American-funded program that feeds school children. “We’re sowing the seeds of competency,” she says. “But overall, it’s a very frustrating situation.”

Bernicat’s languages include French, Hindi, and Russian. She doesn’t plan to study Kriol, Guinea-Bissau’s Portuguese-creole lingua franca. She does plan to study Wolof, Senegal’s lingua franca and the source of some English words, including banana and hepcat. She also plans to continue supporting such rural Peace Corps initiatives as a nut-shelling machine and a foot-operated water pump.

Also on Bernicat’s agenda is strengthening her relationship with Lafayette. She returned to campus in 2006, after a long absence, to discuss the foreign service during the annual Lafayette Leadership Institute and in 2008 for a meeting of the Council of Lafayette Women, where she had a surprise reunion with Statham, a pastor and hospital chaplain, and Pearlman-Storch, an optometrist and professor of optometry.

She also met Curlee Raven Holton, founding director of the College’s Experimental Printmaking Institute. Two of his original art works are displayed in the ambassador’s residence in Dakar.

The Holton connection illustrates a comment made to Bernicat by Statham: “Some people collect souvenirs when they travel overseas. You collect bright people.” Bernicat’s whole career bears out a comment by Pearlman-Storch: “Marcia has always been tough, smart, funny, and open to every kind of new experience.”

For her part, Bernicat says, “I’m a pretty competitive person, but I had to learn that there’s no one route to the top. In foreign service you can’t possibly do the same job twice, even if you change jobs every two to three years. Each time, you have to learn all over again; each time, you can customize your post. So the lesson is: Relax and enjoy the ride. If you want a lifetime of adventure and discovery, become a diplomat.”