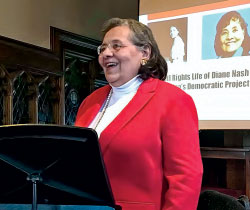 Diane Nash’s life was threatened many times during the Civil Rights Movement of the 1960s.

As co-founder of the Student Nonviolent Coordinating Committee, Nash led the Nashville sit-ins, the first successful campaign to integrate lunch counters in a Southern city, and coordinated the 1961 Freedom Rides from Birmingham, Ala., to Jackson, Miss., which led to desegregation of interstate buses and facilities. She helped initiate the Alabama Voting Rights Project and the Selma Voting Rights Movement, marching with Martin Luther King Jr. and other activists from Selma to Montgomery, Ala.

She and her compatriots accomplished all of this using nonviolent principles, despite the very real possibility of violent retaliation from police and local mobs.

“It is easy to see the power of energy in the components of a bullet, but love also produces energy,” she said to a packed audience at the Williams Center on Feb. 17. Nash called this “agapic energy,” a phrase she coined from the Greek word “agape,” the love of humankind.

Nash called oppression a “partnership” between the oppressed and the oppressor. If either party stops participating, the system will fail.

In mentioning our current social problems—poverty, crime, government corruption, unemployment, mass shootings, continuing race and class tensions—she said that the answers will not come from lawmakers.

“Can you imagine what would have happened if we waited for elected officials to desegregate lunch counters, buses, and get the right to vote?” Nash joked. “The movement of the 1960s provides us with a legacy that you can use in 2016.”

“It was great to see another perspective from one of the greatest activists of our time, because that’s what we’re trying to do right here,” says economics major Charles Evans ’19 (Alexandria, Va.).