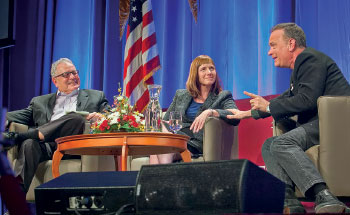 He strode across the stage in Kamine Gym and snapped a selfie—with a crowd of students mugging behind him—for posterity. For the next 90 minutes, Oscar-winner Tom Hanks spoke of war, acting, and finding truth in Hollywood’s smoke and mirrors.

Hanks conversed with President Alison Byerly and Donald L. Miller, MacCracken Professor of History, whose book, Masters of the Air: America’s Bomber Boys Who Fought the Air War Against Nazi Germany, Hanks is developing into an HBO miniseries with Oscar-winning director Steven Spielberg.

“All of the caregivers of my youth … they all had experienced the war,” Hanks told the 1,800 students, faculty, and staff members in attendance. “I was becoming a conscious social being at that time.”