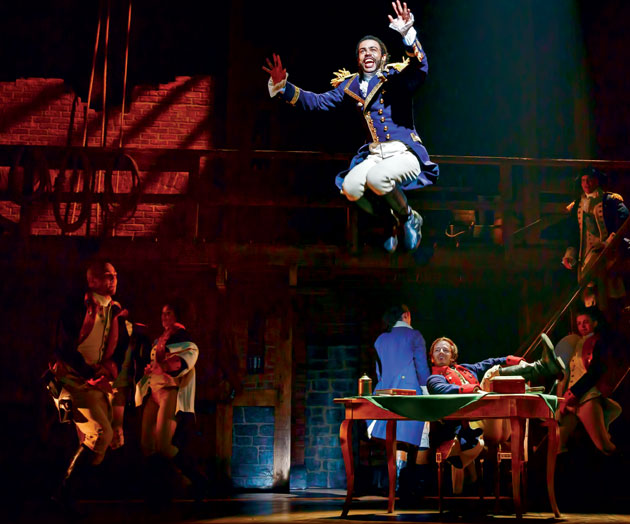 He’s on Broadway as “the Lancelot of the revolutionary set” in the Grammy-nominated rap hit Hamilton: An American Musical. Hundreds of Gen X fans have chanted his name outside the stage door at the Richard Rogers Theatre on 46th Street. Check them out on YouTube. Last month, the Grammy Awards broadcast the show’s opening number live from Broadway.

He’s the protagonist of best-selling author Sarah Vowell’s quirky Lafayette in the Somewhat United States, which has been widely lauded by the media from The Daily Show with Jon Stewart to The Daily Beast. Vowell recently visited campus to deliver a Jones Visiting Lecture on the Marquis.

He’s on cable telling the soon-to-be father of his country the welcome news that the French are coming to turn the tide of the American Revolution in AMC-TV’s “Turn: Washington’s Spies.”

Last summer, he was an international media darling when a replica of his frigate, Hermione, crossed the Atlantic to welcoming crowds at ports along the eastern seaboard. Simultaneous cultural exhibitions at the New York Historical Society and the Boston Athenaeum displayed the Marquis’ documents and artifacts, many of them on loan from the Lafayette College Archives.

Why the Marquis? Why now?

“America loves Lafayette because Lafayette loved us unconditionally,” says Laura Auricchio, School Dean of The New School and author of The Marquis: Lafayette Reconsidered. “He knew that we had faults. He was an active abolitionist who saw the institution of slavery as blight on the land of freedom, but he loved us despite our faults, and he believed that we would overcome them.

“At this moment in time, when our nation faces so many challenges, both internationally and domestically, it’s inspiring to remember that there once was a man who was living in the height of luxury on the other side of the ocean but who believed so fully in our potential that he was willing to leave it all behind and to risk his life for our cause.”

Broadway newbie Daveed Diggs , who knew “literally nothing” about the Marquis prior to being cast as Lafayette in Hamilton, has learned a thing or two from playing “America’s favorite fighting Frenchman.”

First thing? “Style,” says Diggs. “But also that a thing you truly believe is a thing worth working for.”

Vowell, whose work examines the ways that America’s past shapes America’s present through the filter of her particular sensibility, began her journey with the “French boy” more than a decade ago. She filed a segment on NPR’s “This American Life” about the general’s triumphant return tour of America from 1824–25. As Vowell told a C-Span interviewer, she was drawn to Lafayette because, “as a Frenchman, everyone in America—North, South, left, and right—loved him.” He was kind of “everybody’s uncle from across the sea.”

In the course of researching her book, however, Vowell learned that “the sweet simple story about this person everybody loved” was as complicated as the birth of our nation. Intrigue, squabbling, and factional politics are as much our legacy as life, liberty, and the pursuit of happiness.

In the current climate of divisive presidential primaries, Lafayette and his great friend Alexander Hamilton, who emigrated to America from the Caribbean, are making more than music in the
Hamilton score when they rap: “Immigrants. They get the job done.”

Birth of a Moment

College Archivist Diane Shaw agrees that the Marquis is having a moment, one that’s been building at least since 2007, the 250th celebration of his birth date, as the events supporting the Hermione’s voyage to America were years in the making.

Shaw mentions two recent releases that have captured the interest of Marquis’ scholars. Lafayette in Transnational Context, edited by Jordan Kellman, is the first. “I have been very eager for it to appear because it includes the text of the outstanding lecture on Lafayette’s historical legacy that Lloyd Kramer delivered here in 2007,” says Shaw. Kramer is a history professor at University of North Carolina at Chapel Hill.

The other work is the exquisitely illustrated major biography La Fayette: rêever la gloire (Lafayette Dreaming of Glory), published in France, which includes reproductions of some Lafayette College Archival materials.

Shaw is currently at work with Olga Anna Duhl, Oliver E. Williams Professor of Languages, curating an upcoming exhibition on Lafayette at the Grolier Club in New York City. “A True Friend of the Cause: Lafayette and the Anti-Slavery Movement” will run December 2016 through February 2017. According to Duhl and Shaw, Lafayette’s anti-slave position and sustained efforts in both France and the United States on behalf of the abolition aren’t widely known and deserve as much study as his contributions to the military, politics, and diplomacy.

More Than a Moment?

This fall, we’ll all be able to see Daveed Diggs portray Lafayette on PBS-TV’s behind-the-scenes special “Hamilton’s America.” This is welcome news, because tickets to the Broadway show are virtually impossible to score without being fortunate enough to win one of 21 seats in the daily digital lottery #Ham4Ham. The lucky few win the opportunity to exchange a $10 bill, the currency sporting Hamilton’s image, for a seat at Hamilton.

The character of Lafayette in Hamilton will multiply and conquer in future productions with an open-ended run in Chicago this fall and a national touring company launching in San Francisco in 2017. A London production is also on the planning table.

In June 2017, Lafayette will be one of five Revolutionary War veterans featured in the inaugural exhibit of the new Museum of the American Revolution at Yorktown. Another is James Armistead Lafayette, an African-American slave who served with the Marquis during the decisive campaign. Armistead gained his freedom in 1787 thanks, in large part, to Lafayette’s support of his case.

“Lafayette is an extremely important figure at the Siege of Yorktown,” says Katherine Egner Gruber, curator, Jamestown-Yorktown Foundation. “Veterans of the siege continued to make lasting impacts on the history of our nation and our world, and those are impacts we can still see today.”

Now that he’s better acquainted with the Marquis, Diggs is intrigued by Lafayette’s “dedication to his beliefs and the self-discovery that comes from that. To leave your home to fight for a cause you believe as such a young man is extraordinary. And then in doing this, he really comes into his own. He becomes a hero.”

Adds Auricchio, “This long-deceased Frenchman reminds us that our nation was born out of a belief that we could create a better world, and that, no matter what obstacles we face, we must never stop trying to achieve our full potential. We must always be guided by the ideals that inspired our creation.”