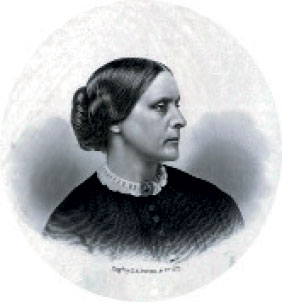 When Susan B. Anthony came to Lafayette College on Dec. 4, 1883, the stern-looking suffragist knew she had to use more than cold logic to convince an assemblage of male collegians to support women’s right to vote.

So she made an appeal to their hearts “to obtain for their mothers and sisters the right so easily bestowed upon foreigners—the right to have a voice in affairs relating to the public as well as their personal and private happiness,” according to the Easton Express.

Anthony, who campaigned vigorously for women’s suffrage during speaking tours across the nation, delivered “Work, Wages and Suffrage” in Pardee Hall as part of a lecture series sponsored by the College Young Men’s Christian Association. The Y had merged with The Brainerd Society, Lafayette’s first and longest-lived student religious organization, six years earlier.

“In the late 19th century, YMCAs were key locations for public speakers to address important social and political issues of the day,” says Mary Armstrong, chair of Women’s and Gender Studies Program (WGS) and professor of English and WGS, which is celebrating its 30th anniversary this year.

Admission to Anthony’s lecture was 35 cents. Coverage by the Easton Express doesn’t report how many students attended the event, but it concludes in language that sounds patriarchal to our 21st century ears: “Whether the audience in Pardee Hall last night accepted the views of Miss Anthony or not, they must admit that she sustained her assertions and claims with very clear and forcible arguments.” 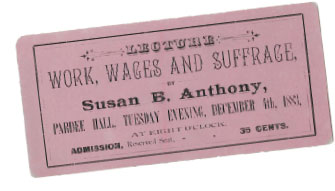 General acceptance of her views was still a long way off. Ratification of the 19th amendment wouldn’t come until 1920, 37 years, 6 months, and 14 days after Anthony’s visit to Lafayette.

The pioneering suffragist, abolitionist, and labor activist wouldn’t live to cast a legal vote, dying in 1906, but her life’s work casts a challenge that resonates today. Yes, American women now enjoy the privilege of voting and working outside the home, but sexism remains embedded in our culture.

Despite strides forward over the past century, women hold only 4.6 percent of Fortune 500 CEO positions and are vastly underrepresented in elected offices across the country. Although women account for 50 percent of the population, they hold less than 20 percent of Congressional seats. America now ranks 98th in the world for percentage of women in its legislature, behind Kenya and Indonesia and barely ahead of the United Arab Emirates.

“Quite often students think that gender equality has been ‘solved’ and that this is no longer an issue,” says Charles A. Dana Professor of Economics and Acting Chair of WGS Susan Averett. “Women’s and gender studies helps them understand both how far we’ve come and how much more there is to do.”

In the span of her lifetime, Armstrong has worked for and witnessed positive advances such as more educational opportunities for women, the passage of Title IX, and increased support for victims of domestic violence.

“Progress has been made, but in the U.S. and across the globe, women remain less safe, less autonomous, less educated, and less valued,” says Armstrong. “Incredible human potential is wasted.”
Anthony’s belief in equal rights for women never wavered during her 86 years. She was born into a Quaker family who saw all people as equal. Perhaps that attitude fueled her unflagging courage even as she was found guilty of the crime of voting in New York State in 1872. As Anthony pronounced in one of the last speeches of her life, “Failure is impossible.”

Anthony’s battle cry could be a social media hashtag rallying support for modern-day groups suffering from legal discrimination: LGBTQ, economically disadvantaged, differently abled, and religiously diverse individuals, to name a few, which is why WGS is more relevant than ever, says Armstrong. A future of equality can only be achieved by empowering students to understand complex gender issues so no one’s voice is muted.

“We need our students to be able to connect this knowledge to the whole world, like Susan B. Anthony did,” says Armstrong. “The well-being of the whole world depends on it.”

Stephanie Louise Kwolek (1923–2014)
Was a DuPont chemist who invented Kevlar, the stronger-than-steel fiber used in bulletproof vests and other body armor, in 1965.

Mary Anderson (1866–1953)
Invented the windshield wiper blade. She received a patent for the “automatic car window-cleaning device” in 1903.

Margaret Hamilton (1936– )
Was the lead software engineer for NASA’s Project Apollo. She created the code that enabled Apollo 11 to land on the moon in 1969.

Ada Lovelace (1815–1852)
The first computer programmer, she worked on Charles Babbage’s early mechanical general-purpose computer, the Analytical Engine. Her notes include the first algorithm intended to be carried out by a machine.

Jackie Mitchell (1912–1987)
Became a professional baseball player when she signed with the Chattanooga Lookouts in 1931. Her contract was voided after a few days, but not before she struck out both Babe Ruth and Lou Gehrig in an exhibition game against the New York Yankees.

Bessie Blount (1914–2009)
A physical therapist who worked with injured soldiers during World War II, she invented an electronic feeding tube to assist people who had lost limbs. The French government began using the device in 1952.

Sybil Ludington (1761–1839)
Rode her horse 40 miles to rouse the militia when she heard the British were attacking Danbury, Conn., making her ride twice as long as Paul Revere’s. She successfully gathered 400 militiamen and unlike Revere, wasn’t captured. George Washington personally thanked her, and she continued to serve as a messenger throughout the war.
Our Pulse Our People