Thigh muscles burning like twin coal fires, I balance on bended knees and stare at my outstretched right hand.

My left extends behind me. I hope my arrangement looks like a Warrior 2 pose and not a flabby pantomime of riding a surfboard. Sweat pours. I try thinking about what Terrence Monte ’03 said
to think about—how the air going in my nose is chilly, and the air coming out is not so much. Instead, I’m worrying about my belly hanging out of my T-shirt and all the women taking Monte’s yoga class at the Pure Yoga studio on New York’s Upper East Side looking at me like I’m week-old Chinese food.

“The arm that you’re looking at,” Monte says, walking between rows of heavy-breathing statues, “represents your future.” I fight the urge to say, “My future is painful and sweaty.”

Monte has the soothing voice of a purveyor of new millennium fitness, a position the 34-year-old mechanical engineering graduate has held for a decade. 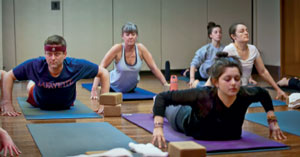 It’s part of the poetry to which Monte has devoted his life. The pliable past, or his view of it anyway, can shift in directions that bring him peace. It extends through four years at Lafayette, where he worked as an intern for Procter & Gamble.

Does Monte imagine his years at Lafayette fading past his knuckles as time better spent learning something more spiritual?

No, he tells me. Lafayette might not have built in Monte a man who crafts machines, but it did set him on the course of his lifelong quest to discover what makes the human soul work.

While many of his former classmates spend their days wearing business casual in office buildings, Monte navigates the city in loose-fitting sweatpants and short-sleeve shirts that hug his slender frame. A wash of long hair spills from the top of his scalp over close-clipped sides. He teaches a number of classes and hustles from gig to gig. In between, he attends Pacific College
of Medicine, where he’s obtaining a doctorate in Oriental medicine.

“I hated it,” he says over hot tea at the coffee shop around the block from the Pure Yoga studio and near his apartment. He’s talking about his internship at Procter & Gamble. He doesn’t blame the company for his abandonment of the industry. Rather, Monte blames himself. 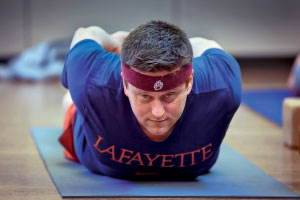 Anger figured heavily in those days. On Dec. 18, 1998, while Monte was filling out his college applications, his father died. Monte was about to head off into an unforgiving world he loathed, and what was worse, he didn’t know what he wanted to do. Lafayette’s mechanical engineering program offered options. “It seemed to me like it was a jack of all trades,” he says, “a little chem, a little computers, a little civil.”

He viewed the world from cloistered superiority. Monte was smart. Everyone else … not so much.

His internship tested that perspective. Monte went into an office and tried to come up with more efficient ways of producing products. He’d emerge and say, “I have this great idea. Here’s how I’m going to save a million dollars.

“These were guys who had been working on the line for like 20, 25, 30 years. High school education. Maybe college education, but probably not,” he says. “They’d say, ‘Yeah, here’s why you’re stupid. We tried that 10 years ago, and your idea’s not going to work.’ It wasn’t good.”

So as his classmates found their footing in engineering, Monte left Lafayette still unsure of where he was headed. 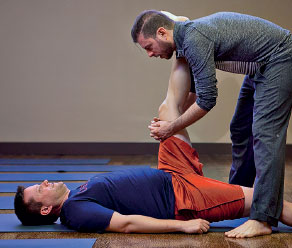 In class, Monte tells the 15 or so students to lie on our bellies. Gratefully, I imitate a beached humpback. Every muscle shrieks.

I’ve only yoga’d in a basement. It was part of a video-guided workout, but my attempts at the intricate poses were all wrong. I told Monte so over the phone before our meeting.

He laughed. “I’m trying to decide whether there’s such a thing as a wrong way to do yoga,” he said.

If there’s a right way to do yoga, Monte is doing it. His website, terrencemonte.com, is loaded with photos of him pretzeling into a flip book of poses. In one, he splits his balance between his left foot and right arm. He kicks his right foot above his head and rests the back of his head on his left ankle. In another, he balances on two hands, one foot standing on his elbow, the other with its sole kicked out and facing upward.

Yoga didn’t come naturally to Monte, either. In fact, the first time Monte walked into a yoga studio, it pissed him off. He was pursuing a master’s of fine arts in acting at University of Iowa. Yoga was a requirement. He tried to get out of if, but he was told if he didn’t take the class, he’d have to drop out.

So, Monte strode into the studio with the same angry chip on his shoulder he had at Lafayette. But as he went through the basic poses the instructor threw at him, Monte felt his anger turn in a direction he’d never felt it go before—inward.

Why couldn’t he get the simple moves right?

“And the first 10 minutes I fell in love,” he says. “And I mean in love. Like the way you would fall in love with a woman.”

By the time he moved to California after graduation, yoga had become his life. He lived there for a few years before moving back to New York. Somewhere in between, he became a certified instructor through the Yoga Alliance. 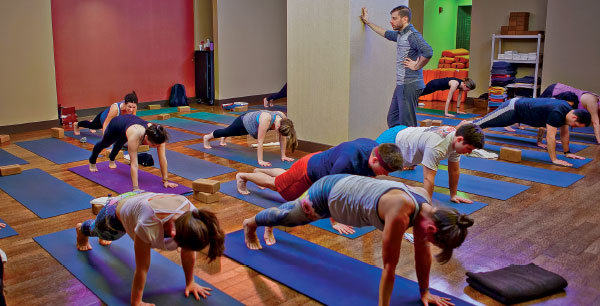 And now, in New York, he’s teaching at a variety of classes, including this one, Slow Flow, a less difficult option than an advanced one.

By the time 40 minutes have passed, my T-shirt is soaked. My mind is not at peace. Mostly, I’m kicking myself for all the junk food.

Monte instructs us all to take a blanket from a set of shelves, because for this next part “you’ll probably get chilly.”

We lie on our backs.
Monte turns off the lights.
We count our breaths.
Monte’s voice gets slower.
Slower.
We picture a chalkboard.
We walk to a river.
We swim down into darkness.
Finally we float among the stars, free to explore the universe to which we belong and which belongs to us.

And under my blanket, my mind is still as a deep winter pond. Thoughts bubble up through the ice.

One is: In what possible way is Monte using his education from Lafayette to slowly guide us through our own brain synapses?

“I don’t think people at Lafayette would say, ‘We’re trying to train you for the job,’” Monte says. “What they would say, and what I would say, is that Lafayette trains you how to think. And I think that’s what everyone values.”

Take his anger, for example. Is it an emotion? Certainly. But also “anger’s a very deep fuel,”

Monte says. “It’s very easy for me to stoke.”

He’s learned to recognize how it manifests itself physiologically. And he’s learned now when he feels angry to alter the machine that is Terrence Monte. Don’t get angry. Stop talking. Listen.
“That break,” he says. “That’s yoga.”