The 18,000-square-foot building houses a black box theater seating up to 200 and a 180-seat film-screening room as well as a box office, control room, smart classroom, dressing rooms, and scene and costume shops. It will support the College’s programs in theater and film and media studies, enhance artistic opportunities for all Lafayette students, and add to Easton’s cultural resources.

The building completes the expansion of the Williams Arts Campus on North Third Street, at the base of College Hill, where the College connects with downtown Easton.

The expansion, a project totaling $21 million, has increased the College’s space for the arts by almost 50 percent and created a spectacular gateway to both the Lafayette campus and Easton. A gala celebration of the arts campus is scheduled for September. 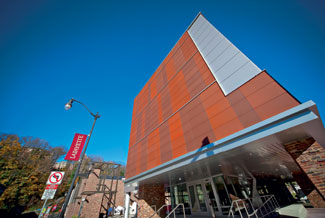 “We are deeply grateful to Bill and Laura Buck,” says President Alison Byerly. “This magnificent gift in support of the arts is the latest example of the Buck family’s enduring dedication and generosity to Lafayette, which spans generations.”

Bill Buck says, “I feel thankful for the opportunity to give back to Lafayette, a place that has meant so much to me and my family, and I am pleased and fortunate to be able to contribute to enhancing the experience of the arts for future Lafayette students.” Buck is a retired executive vice president of TDH Capital Corp., Radnor, Pa., which he formed with his late brothers, Alexander (Whip) Buck ’53 and James Buck. He is a member of the limited partnership that owns the Philadelphia Phillies.

At Lafayette, interest in the creative and performing arts among students in all disciplines has never been greater. By increasing opportunities for artistic engagement, the Bucks’ gift supports one of the main areas of emphasis, or pillars, of the Live Connected, Lead Change campaign: to foster integration within the College’s distinctive combination of traditional liberal arts with programs in engineering.

Previously during the campaign, the Bucks contributed to the installation of a new stone Lafayette College sign at the corner of College Avenue and McCartney Street. A gift of Lafayette’s Tau Chapter of Zeta Psi, the sign is part of a comprehensive program to improve and beautify the main entryways to campus.

The support of thousands of alumni, parents, and friends is propelling the campaign toward its goal of $400 million to build on and connect the College’s strengths, solidify its standing among the nation’s most outstanding undergraduate institutions, and position
it for future success.

Gifts from the Buck family, including Bill’s father, J. Mahlon Buck ’21, whom the College awarded an honorary degree in 1964, and mother, Grace Buck, also have supported music education and performance, athletics, and Skillman Library, among other areas. The Buck Courts for racquet sports in Kirby Sports Center are named in honor of Bill and Alexander Buck.

An economics and business graduate, Bill Buck has served the College in a variety of volunteer roles, including board associate, a member of the Alumni Council Executive Committee, and chair of the Annual Fund. He received the Zeta Psi Fraternity Distinguished Service Award in 1988.

The Williams Arts Campus expansion is a major objective of the Live Connected, Lead Change campaign. In addition to Buck Hall, the expansion includes the transformation of the former Mohican building at 248 North Third Street to house a studio theater, television/video production studio, media labs, and editing suites. That venue opened in 2014.

Other facilities at the arts campus are the Williams Visual Arts Building, an art gallery and studio complex that has served both the College and the community since its opening in 2001, and the Ahart Family Arts Plaza, which opened in 2010.

The black box theater in Buck Hall is named for former Lafayette president Daniel Weiss and Sandra Jarva Weiss, thanks to a donation by the Board of Trustees honoring the couple.

The film-screening room is named the Landis Cinema in honor of the late John Landis ’39 and Muriel Landis.

The Williams Visual Arts Building includes the Grossman Gallery, named for Richard Grossman ’64 and Rissa Grossman. The arts plaza is named in honor of Edward Ahart ’69, chair of the Board of Trustees, Catherine Ahart P’97 ’03, and their family. It was showcased in the Prague Quadrennial of Performance Design and Space, a premier international exhibition, and named Building of the Year for 2014 in a web poll conducted by American-Architects.