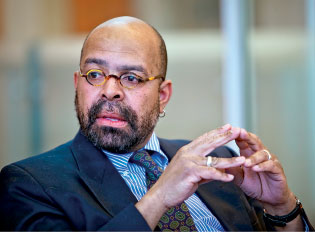 At first, English Professor Bryan Washington confounded me. I admired his astonishing intellect, his passion for teaching, and his wicked sense of humor. On the other hand,
I found him loud, arrogant, and unapologetic with regard to his politics, and he wore his aristocratic pretensions on his sleeve.

It was not unusual for Professor Washington to hold court with stories of his favorite Parisian restaurants, his collection of Armani suits, or an expensive piece of David Yurman jewelry. I liked him right away, but I also considered him a colossal snob. Once, a fellow student complimented his cashmere sweater, at which point he looked up from his notes and deadpanned, “My wardrobe is worth more than your collective lives.” The class gasped. Could he actually be serious?

I learned that Professor Washington’s haughty teaching persona belied his kind and generous heart. As our friendship deepened, I understood his classroom identity as a form of protection. He once wrote that he was a gay black man teaching to a mostly white audience, an academic and social outsider who needed to defend himself.

When I started my own career as an English teacher, he shared a bit of wisdom: “A great teacher can walk into a room full of students and have a conversation.” His off-the-cuff teaching style was, in fact, carefully calibrated to help students learn. His pedagogy, which was built around sharing bits of his life along with varied, often hilarious observations on popular culture, ensured that we, his students, felt comfortable to pursue the intellectual work he cared about so deeply. At the heart of his courses were complex questions about race, class, and sexuality. Those classroom conversations changed my life and altered how I see myself and my place in the world.

But Bryan Washington taught me even more about friendship. During our final thesis meeting, I awkwardly tried to thank him for all he had taught me. Headed off to graduate school, I didn’t expect to see him again, but he said, “I’ll take you out to lunch; it’s all part of your education.”

Bryan was a lifeline for me during my first semester. We chatted every few weeks or so by phone or email: he listened carefully to my complaints and work-related anxieties; he offered insights on the writers I was studying; and he shared his own graduate school “war stories,” reminding me that I would make it through.

The following semester, Bryan treated me to lunch at Fork bistro in Old City. Over the next 10 years, we met for lunch, along with his wonderful husband, Russell, every few months. I never once paid the bill, although I tried to on several occasions.

We had our final Sunday lunch in August, nearly four months before he died on Dec. 31, meeting at his home. I was jolted when I walked into the kitchen and witnessed how the cancer had ravaged his body. No longer able to speak, Bryan communicated through handwritten notes.

When I made a joke, as I so often did, about his snobbery, he smiled, scribbled a quick note, and slid it across the table. “I believe that people should master the rules of the elite. Know their game, and never let them put you down.” Tears welled in my eyes. In that moment, I understood that he was teaching me one more lesson to add to the countless ones I will carry with me for the rest of my life. Before I left, I kissed his forehead, thanked him for lunch, and told him that I would see him soon.

English graduate Kellen H. Graham ’04 teaches upper school English at The Haverford School. He earned a Ph.D. in English, with a concentration in American Literature, at Temple University.