One moment, David Bednar ’17 was pitching in front of 6,812 steamy fans for the Amarillo Sod Poodles at Hodgetown Stadium against the Arkansas Travelers. The next, his manager was telling him he was headed to the big leagues, where a crowd of 38,701 would watch Bednar pitch for the San Diego Padres in San Francisco’s Oracle Park. 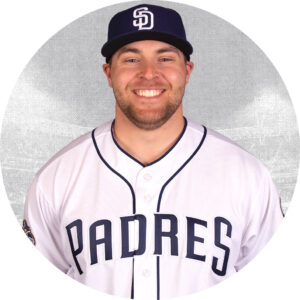 He quickly realized he was skipping the Triple-A level to achieve his baseball dream.

“I really couldn’t tell you who I faced,” Bednar says. “My first two pitches I spiked because I was so excited. But I got three popouts. It was really cool.”

Bednar pitched three seasons for coach Joe Kinney’s Leopards before being taken by the Padres in the 35th round of the 2016 MLB First-Year Player Draft. He left Lafayette with the third-most strikeouts (188) in a career in program history.

The right-hander started in all 29 of his appearances with Lafayette but has been a reliever in all 172 professional appearances—including 13 last season with the Padres.

What he brought with him from College Hill was a fiery competitiveness and a better understanding about who he is as a person.

“(Kinney’s) competitive spirit really rubbed off on all the guys,” Bednar says, “and his will to win no matter what the circumstances are. That was probably my biggest takeaway.”

Bednar was not heavily recruited out of Mars High School, which is just north of Pittsburgh. He enjoyed the rigorous academic demands as well as the challenges on the baseball field at Lafayette.

His passion for baseball started in the backyard with his father, Andrew.

“We have a batting cage,” Bednar says. “We always took extra swings, extra reps, extra ground balls. He was definitely hard on me at times, but I wouldn’t trade any of those memories for anything.

“In Little League, I was never the kid who absolutely dominated. I was pretty good. I wasn’t fully grown at age 12. My dad always worked hard with me and always kept pushing me. He coached me from Little League through high school.”

Bednar also was a catcher through high school, but “I couldn’t hit so I don’t really (miss catching). I like pitching a lot.”

The 6-foot-1, 220-pounder split his first summer in professional baseball between rookie league ball and low-A ball in the Padres organization.  He spent 2017 and 2018 in high-A ball before starting 2019 with Double-A Amarillo (Texas).

“Our manager called everyone together talking about the day and called out another pitcher and said he was going up,” Bednar recalls. “Then he said, ‘Bednar, you’re going up with him.’

“It was cool because everybody was there, and then everyone started giving me hugs.”

Bednar’s first call went to his parents, who were sitting together on the patio at their home.

No family members were in San Francisco Sept. 1 for his debut, but about 20 family members and friends made it to Arizona’s Bank One Ballpark (now Chase Field) Sept. 3 for his next outing.

Bednar had nerves in his debut, but one thought kept resonating with him.

“Just keep all the baseball stuff the same,” he says. “The stadium and field are just massive, and you’re playing against the best of the best. I think if you know you have the ability to go out and compete, good things will happen.”

The accommodations in the clubhouse were significantly better in the majors, but there was one subject that came up most when Bednar first talked with his family and friends.

“The food was awesome,” he says. “The ice cream was probably my favorite part. There was ice cream every day. It was hard not to have it.”

A meeting with former major leaguer Hideo Nomo during one fall instructional league helped Bednar make a jump in his progression as a professional pitcher.

The reliever always had a fastball and curveball in his arsenal, but knew he needed a third pitch, an out pitch. He tinkered with a splitter for a few years, and Nomo helped Bednar refine it.

My biggest takeaway was when I throw good pitches,
I can get anybody out

“Nomo helped the splitter become what it is today,” Bednar says.

He strung together seven consecutive scoreless outings to start his Padres career before allowing runs in four of his last six appearances of 2019.

“My biggest takeaway was when I throw good pitches, I can get anybody out,” Bednar said. “When you’re in the zone, good things happen.

“(In my last outing), I just wasn’t really throwing strikes. Those guys are good hitters and take advantage of mistakes.”