How Wataru Ando '18 turned lifelong passion for baseball into profession

As a kid, Wataru Ando ’18 used to dream about being a Major Leaguer. But it always was just that—a dream. He loved baseball, but he knew he wasn’t quite talented enough to trot onto a professional diamond. He was happy to indulge his passion for the game as vice president of the College’s club team and in front of a screen on his couch. 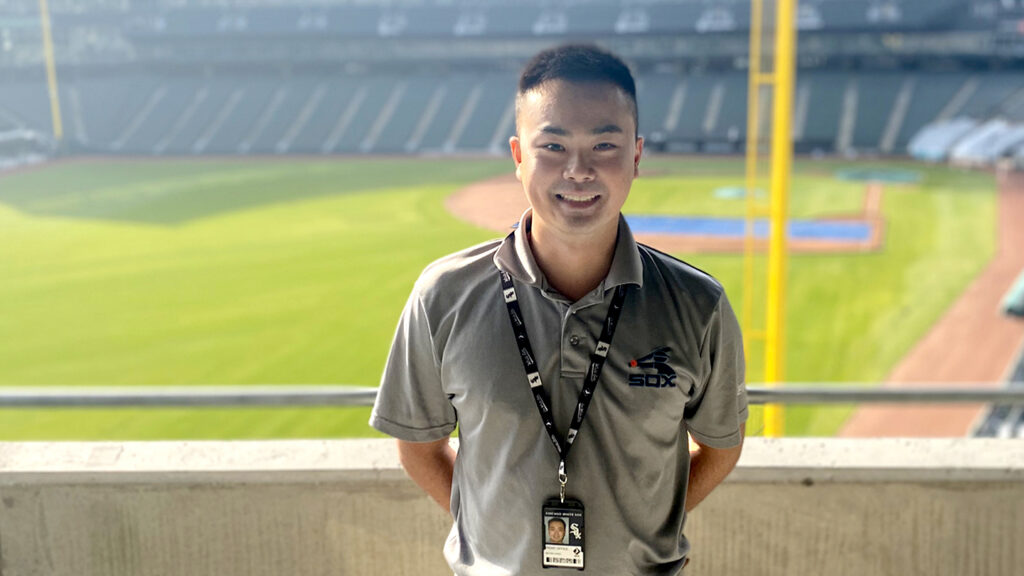 Which is why Ando was completely shocked and thrilled when he found himself shaking hands with a man inside a suite at Guaranteed Rate Field on the south side of Chicago one evening this fall.

“That was just such a cool moment,” says Ando, who graduated with a degree in mathematics. It became part of a series of cool moments Ando has experienced in the past four months. It might not be the way he envisioned it as a kid, but Ando is now a Major Leaguer.  He got there not through his prowess at hitting a fastball but through his obsession with numbers—and how they can impact the game he loves.

In mid-October, Ando joined the Chicago White Sox as one of the team’s three baseball analysts in the front office. The job is highly coveted and nearly impossible to get, especially for someone only two years out of college. Perhaps the only way Ando got the gig is because he doesn’t view it as a job.

“This is my passion,” he says.

After graduation, he moved to Madison, Wis., to work as a system engineer at a health care company. At night though, he watched baseball with an MLB TV subscription—a gift from his thesis adviser, Evan Fisher, professor of mathematics.

As he watched, he obsessively followed a cadre of statisticians and MLB-obsessives on Twitter who use data to analyze the performance of teams and players across the league. Ando’s degree in math and skill set as a programmer set him up to do some of the exact same analysis that scrolled across his feed.

He started chatting with professional MLB analysts. They told him he had a strong résumé to join their ranks, but he lacked experience directly related to baseball.

So, after getting home from work, he dove into publicly available data, hoping to dig up something that would help him stand out.

Over the course of roughly four months this past spring and summer, he ended up creating a statistical model that can identify underappreciated batters. The basic concept: Every MLB stadium is different, with outfield walls at differing heights and distances from home plate. Which means a home run at one stadium wouldn’t necessarily count as a home run at another stadium.

Ando analyzed more than 100,000 hits from the past three seasons to see if players could be hitting more home runs if they joined a different team.

Ando also discovered that Nicholas Castellanos, who at the time played for the Detroit Tigers, could have hit twice as many home runs if he played at Wrigley Field. Castellanos was eventually traded to the Cubs, where he has seen a significant uptick in his home run numbers.

“I don’t think the Cubs saw my tweets about this during that time, but it’s cool to see that my theory proved out,” Ando says.

His model was so intriguing that he was accepted to present it at the annual Sabermetrics Conference in Boston—a two-day event for leading professional baseball analysts and superfans. After the 10-minute lecture, Ando was contacted by 10 pro teams. He then applied and had further conversations with the White Sox.

“I got a call on September 3 at 4:46 p.m. from the director of analytics offering the job,” he says. “It was probably the best day of my life.”

Ando spent hundreds of hours as a fan sifting through stats. Now, he says the coolest part of his job is that he gets to do the exact same thing, except this time it actually has an impact on a professional baseball team.

You can’t get this job just liking baseball or math. You have to be really, really passionate.

He will spend the rest of the offseason building new models—these ones are secret to give the White Sox an edge—so that he can recommend underappreciated players that the team will draft or sign as free agents. When the season starts, he will watch from the windows in his office, which overlooks the field.

“I am so much more attached to the White Sox than I was just watching games from my couch,” he says. “You can’t get this job just liking baseball or just liking math. You have to be really, really passionate.”

What he’s really saying? You have to hold on to that dream of becoming a Major Leaguer. Even if it’s through numbers, not hits.