But it’s also a pervasive pollutant. How do we reconcile our dependence on plastic? Learn how Lafayette’s faculty, students, and alumni are developing innovative plant-based plastics and what’s being done to reduce plastic consumption on campus.

In the polymer lab at Acopian Engineering Center, faculty and students are working to develop a plastic made from birch bark. There’s even an edible plant-based plastic straw coming soon from a company backed by a Lafayette alumnus.

While steps are being taken to address the incalculable volumes of consumer plastic, there’s a lot of catching up to do before we see a noticeable shift in how plastic is produced. Polymer plastic, the technological juggernaut of the 20th century, is only about 60 years old. When entrepreneurs realized it could be made cheaply to create all kinds of imitation luxury items, from bracelets to poker chips, they dove in and made as much of it as possible, “without thinking of what would happen at the end,” says Ryan Van Horn ’04, associate professor of chemical and biomolecular engineering.

Van Horn, who studies the structure of plastics and how they degrade over time, is an unabashed advocate for plastic. He freely admits that he was one of those kids who found endless fascination in watching a foam cup dissolve away into a plume of inky smoke in a blazing campfire.

“There’s a lot of good and there’s one obvious bad that we talk about with single-use plastic, and I think that should be addressed,” he says. “But I don’t think that we should let that tell the story of what plastic is all about.”

Plastic has allowed humans to live better and longer with equipment such as stents, pumps, 3D printers to make prosthetics, even pill casings. Domestically, plastic has brought comforts and conveniences—imagine a world without Saran Wrap and fleece jackets. There’s probably some form of a poly in our blankets and pillows. 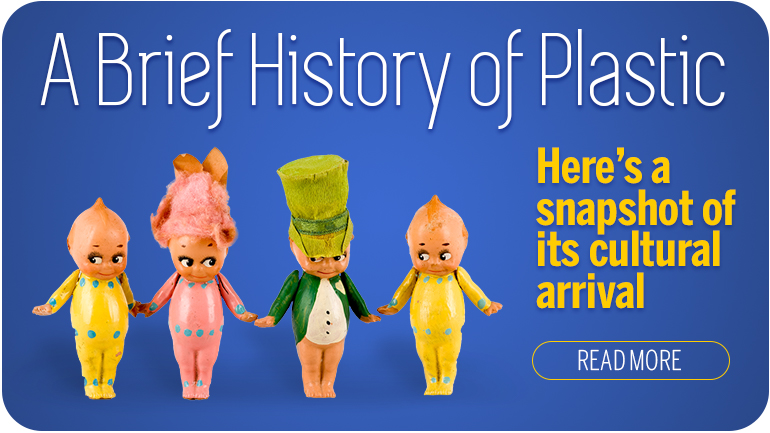 Electronic advancements have been facilitated by plastic—everything from circuit boards to touch screens.

“It’s such an amazing material because we can do so many things to make so many different kinds of products,” says Van Horn, whose First-Year Seminar, “A Plastic World,” encourages students to look at plastic with fresh eyes, starting with plastic pollution and discussing what plastics and polymers do for us and to us.

So Far, the End is Not Looking So Good 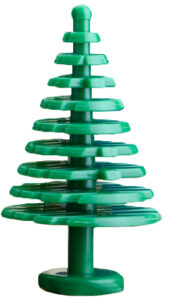 “There’s a lot of work trying to find renewable resources to make a degradable, plant-based plastic,” Van Horn says. “Most of the difficulty is having the same properties as traditional plastics and doing it on the scale that’s needed and at the cost that people are accustomed to. So a lot of the issue is matching to the market in a way that the exchange is one to one.

“My feeling is that we’re still far from that being the case. An initiative is needed to absorb some of the costs for the environment or the health of the planet,” he says. “It’s not one to one now, but there’s a need to make changes slowly somewhere.”

In collaboration with researchers at Rowan University, Melissa Gordon ’11, assistant professor of chemical and biomolecular engineering, and Lindsay Soh, associate professor of chemical and biomolecular engineering, are working on producing a marketable, scalable plastic from birch bark. They have received a National Science Foundation grant to support the research.

I am hopeful that this collaborative research will help us move toward alternatives to petroleum-based plastics.

“I am hopeful that this collaborative research, along with the outreach and educational modules developed as part of this work, will help move us toward alternatives to petroleum-based plastics,” Gordon says. “We are very excited and thankful for NSF’s support.” 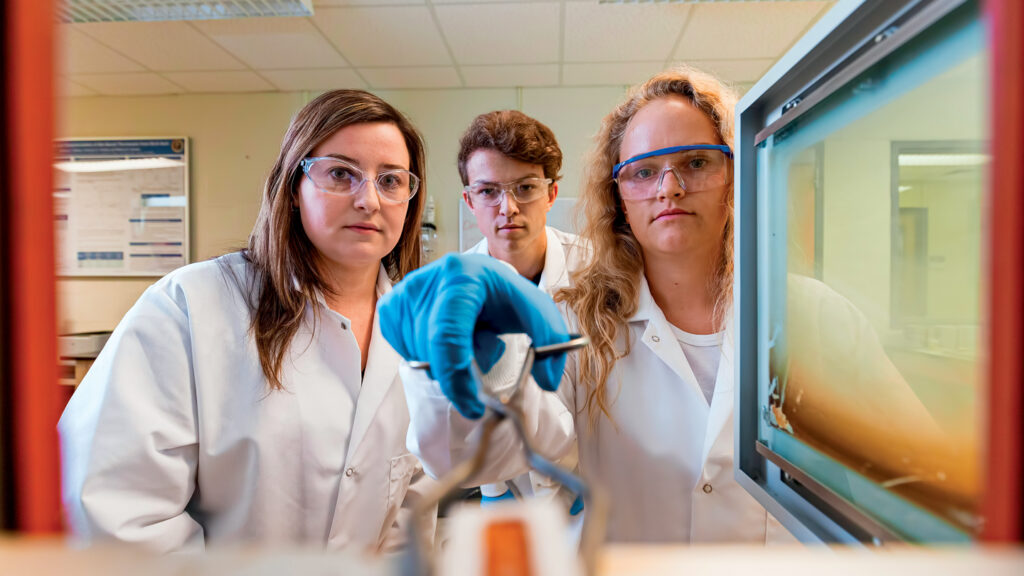 The process goes like this: Specific chemical building blocks extracted from the birch bark are purified, reacted, and cured in molds overnight. Small rectangular amber-colored pieces that look and feel like hard, durable plastic are the end result. The materials show strong mechanical properties and thermal stability, properties that are important for plastics. Their recent work was published in ACS Sustainable Chemistry and Engineering.

Petroleum plastic never fully disappears or degrades by the forces of nature; it just breaks apart into smaller pieces and finds its way into the guts of mammals and fish and into food and water sources. 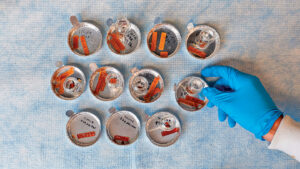 “But the way we design the polymer with natural feedstocks, we hypothesize that it would degrade naturally,” Gordon says. “The building blocks are found in nature, and could perhaps break down naturally by microbes. And we expect it to break down with water too.”

Gordon was drawn to plant-based plastic research because of the growing challenges associated with human addiction to single-use and disposable plastic. “It’s a problem that affects all of us; it’s good to work collaboratively with other people on this research,” she says. “I enjoy working with and learning
from others.”

Jimmy Hastie ’22 (chemical engineering), an EXCEL Scholar working in Gordon’s lab, feels hopeful that by turning to nature to extract chemicals for a biodegradable plastic, industries might start looking at plastic with fresh eyes. “It’s a step in the right direction,” he says.

“Single-use plastics are one of humanity’s most detrimental creations,” says Cameron Cranley ’20 (chemical engineering), who’s joining Gordon on the research and is a co-author on the study. “While some applications do require nearly indestructible materials, the applications of single-use materials do not. The plastics created under Gordon indicate the possibility of replacing the single-use plastics detrimental to our ecosystem with single-use materials that would leave little to no mark on the planet in the long run. Moreover, these plastics are strong, but not indestructible, and have been designed to break down in water, unlike those making up large swaths of water pollutants.”

“I’m hopeful that with a lot of research, we will be able to move toward a more sustainable use of plastic and decrease our dependence on petroleum-based plastic,” she says. “There’s still a lot of work to do to get to that point. Technologies are new and have to consider how to source materials and how to dispose of it and consider the economics of the process.”

“There are a handful of efforts at Lafayette including our TerraCycle programs, which recycles plastic toiletries, pens and markers, chip bags, and oral care products, which are not accepted in single stream recycling,” she says. 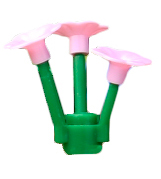 “We also have a program through office product provider W.B. Mason Co. Inc., which offers K-cup recycling to offices and residences that have Keurig machines,” Roberson adds. “Additionally, we hand out a reusable water bottle to all first-year students to encourage the use of our water fountains instead of plastic bottles, and we also have reusable clam shells that allow students to take food to go without single-use containers.”

The popular ECO cafe in Rockwell Integrated Sciences Center, managed by Bon Appetit, the campus food service provider, is testing out more paper packaging, which is compostable, instead of the typical plastic containers. Bon Appetit also plans to phase out all plastic straws nationwide this year.

“We also handed out reusable stainless-steel straws at last year’s Reunion,” Roberson says. “It was a great conversation starter for us and engaged all of the classes about what the Office of Sustainability is doing to make Lafayette more sustainable. Everyone loves a freebie.”

A Sea Change for Plastic

Billions of straws made from biodegradable seaweed are poised to enter the market as Loliware, an edible plastic company backed by Justin Kamine ’11, prepares to scale up production.

The company Kamine partnered with in 2014 and led by Chelsea Briganti went on Shark Tank in 2015. It wasn’t until about 18 months ago though that their business plan shifted with a plan to go after public enemy No. 1—the plastic straw—using seaweed.

“At that moment, we knew this emerging technology would offer a great start to take on the plastic straw,” says Kamine, whose family company, Kamine Development Corp., develops solar energy projects and innovative ways to reduce food and plastic waste.

Loliware uses seaweed, which sequesters carbon dioxide as it grows, and through a patented process is able to create a product that has both structural integrity and flexibility. Straws can be colored, flavored, and last for hours in hot and cold drinks.

Kamine expects the straws to be widely distributed in 2020. “It’s 100% biodegradable and will break down in just 60 days if it’s exposed to the natural environment,” he says.

The same ingredients that go into the straw also can be used to make sustainable lids and cups, allowing consumers to have a new experience with single-use products.

“It’s the only material we know of that is a relative equivalent to the structural integrity of consumer plastic,” Kamine adds. But it doesn’t have the chemicals and stabilizing resins of traditional plastic that can leach into drinks, and it surpasses the performance of paper straws, which tend to quickly break down when they come in contact with liquids.

“It’s hard not to find them more increasingly interesting and impressive,” he says. “The progress we’re making in all aspects of life has been driven by more science and development in polymer technology. I’m going to be an advocate with the caveat that there are things that we will need to fix.”