At Invertase Brewing Co., Steve Zolnay Jr. ’15 puts engineering into every ounce of beer he pours

Steve Zolnay Sr. says his son’s idea of a good time is to buy a six-pack of different craft beers and analyze the chemistry of each brew.

A way of life for the Zolnay family for years, home brewing gradually blossomed into a science-based passion with the October 2019 opening of Invertase Brewing Co. in Phillipsburg, N.J. 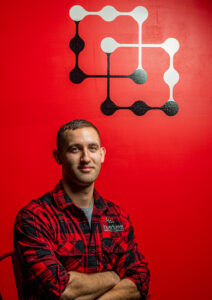 “I remember one Father’s Day getting my dad one of those homebrew kits to make your own bad beer and nasty pale ale,” says Steve Zolnay Jr. ’15. “We’ve been brewing together for years. We graduated slowly over the course of time. Then the thought came up that ‘Hey, let’s think about starting a brewery.’ We started talking about how to scale up and the resources and equipment that would be required.”

After searching possible sites in New Jersey, the Stockton, N.J., family found a receptive local government and favorable zoning laws in Phillipsburg, an appropriately sized vacant industrial building at 51 N. Broad St. in a part of town that’s been targeted for economic redevelopment, and parking for 250 vehicles.

At Invertase, quality, consistency, precision, and more than a pinch of scientific nerdiness find their way into every ounce of beer produced.

You could call Invertase the STEM of beer making, the result of a partnership between brewmaster Steve Zolnay Jr., who received a degree in mechanical engineering from Lafayette, and his business partners: his dad, a biochemist; his mom, Karen, a microbiologist and yeast expert; and his brother-in-law, a mathematician.

“We’re loaded for bear as far as talent is concerned,” he says. “It just kind of got legs, and we started going crazy. It’s fantastic.”

Even the name of the brewery reflects the family’s scientific background.

Invertase is the enzyme used to break down sugar that’s consumed by yeast in the fermentation process; the company logo is a stylized 3-D representation of the Invertase molecule.

With a blank canvass of 5,000 square feet and a foamy dream to fulfill, he put his Lafayette engineering degree to work, designing and building much of the brewing equipment from scratch.

“If you don’t have the amazing Lafayette engineering degree and the crazy, psychotic engineer brain, you can easily cut a check for a million dollars and buy the fermenting equipment, control temperature control systems and chillers, and simply install it and start making beer on the first day,” he says.

“That was not a proposition we wanted to explore,” says Zolnay, who built everything except the fermentation tanks by hand to control capital costs and maintain quality. “If something breaks down, I can fix it immediately. Because the system is tailored to my brewing style, our quality is high.”

He and his dad also built the long picnic-style tables to encourage conversations among customers in a German-like beer hall setting in the tasting area. It’s BYOF, and patrons often bring their own snacks or order food from the pizzeria across the street. Plans are underway for outdoor seating in a hops garden behind the brewery. 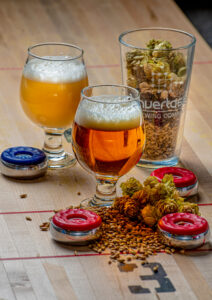 From Invertase’s taps flow a dry-hopped American pale ale, a West Coast IPA, an Imperial stout, a Belgian tripel, and its flagship brew, a New England-style IPA. The Zolnays collaborated with a cocoa farmer in Lima, Peru, to produce a chocolate porter conditioned on single-sourced, organic Peruvian cacao nibs.

“I like to have a diverse tap list and try different styles made with a pride that comes from our home brewing tradition,” Zolnay says. “Part of it is that my mom is an amazing microbiologist. We can manage multiple yeast strains at the same time.”

Invertase produces about 100 gallons of beer per batch and 2,600 gallons annually, but Zolnay says his goal is to focus on consistent quality and making flavorful beer that’s tapped into sparkling clear glasses without any imperfections.

“All of that is important,” he says. “My beer is a great experience, and I want people to say, ‘Wow, you guys are really good.’”

Zolnay is proud of his attention to detail, the viability of the yeast, brewing temperature, and the balance of hops and organic acids in his beer. It’s all documented in his four-page Excel spreadsheet.

“I think a lot of it comes from my engineering side, paying attention to every detail and making sure all the boxes are checked off,” he adds. “That’s what Lafayette did for me. Lafayette engineering is behind what we’re striving for—consistency and quality.”