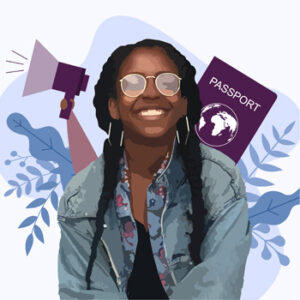 Yazmin Baptiste ’20 has been recognized as Global Citizen of the Year by IES Abroad, a nonprofit study abroad and internship organization. The annual award recognizes outstanding students who have studied abroad through an IES program and have used their experiences to make a positive impact on the world.

While studying in Rabat, Morocco, in 2018 as well as in Rome, Italy, in 2019, Baptiste helped support refugee and immigrant communities with her volunteer work and research.

An anthropology and sociology major with a minor in religious studies, Baptiste taught English to immigrants in Rabat through Fondation Orient-Occident, a nonprofit that aims to promote employability of migrants, refugees, and disadvantaged youth. In Rome, she volunteered with Hands Off Cain, a nonprofit working toward worldwide abolishment of the death penalty.

Baptiste was selected as Global Citizen of the Year among student applicants from 25 colleges and universities across the United States. She received a $1,000 cash prize as well as a $500 donation from IES Abroad to her charity of choice—No More Deaths (No Más Muertes), an Arizona-based humanitarian organization dedicated to ending migrant deaths at the U.S.-Mexico border.

“I am so happy that I got the award,” Baptiste says. “Immigration is important to me for so many reasons. My dad is from Haiti, my mom is from Jamaica, and I’m the first generation that was born here. It was really validating [to be named Global Citizen of the Year], and I feel like I’m going on the right path and doing things that I love and care about.”

In their applications for the award, students were asked to describe their experiences abroad and how they contributed to those communities, share the lessons they learned about themselves and the communities in which they live, and illustrate how they continued their influential work once they returned home. What made Baptiste’s award submission stand out among the rest: She was the only applicant to challenge the meaning of the term “global citizen.”

“I question the term ‘citizenship’ because it is an inherently exclusionary term,” she says. “If you have citizenship for all, there would be no need for citizenship. It is associated with a national identity, so I question the idea of even being named a global citizen because that term itself excludes so many people, in particular the people that I research and I try to help.”

Baptiste already is putting into action the lessons she learned while abroad. After participating in an “invisible tour” in Rome, during which she was led through various locations in the city and listened to narratives given by migrants about their experiences at each destination, Baptiste decided to bring the concept to Lafayette—with a unique angle.

This spring, she hopes to launch the Mental Health Invisible tour, which will guide participants through 20 anonymous student narratives about topics like sexual assault and racism. Her hope is to help give a voice to students who are silently dealing with hard-hitting issues, and bring a sense of community to those who may be going through similar experiences. (Commentary offered by contributors to the Invisible Tour can be heard on Spotify, Apple Podcasts, or Google Podcasts.)

“I really broke out of my shell when I studied abroad, and I took a lot of risks,” Baptiste says. “I think I’m more equipped now to really understand other perspectives. The Mental Health Invisible Tour started out inspired by study abroad, because when I got here I realized there was so much that people really wanted to talk about on a public platform, but really had no outlet.”

After she graduates, Baptiste plans to pursue a master’s degree overseas as well as continue advocating for immigrants all over the world—especially within border communities in the United States. 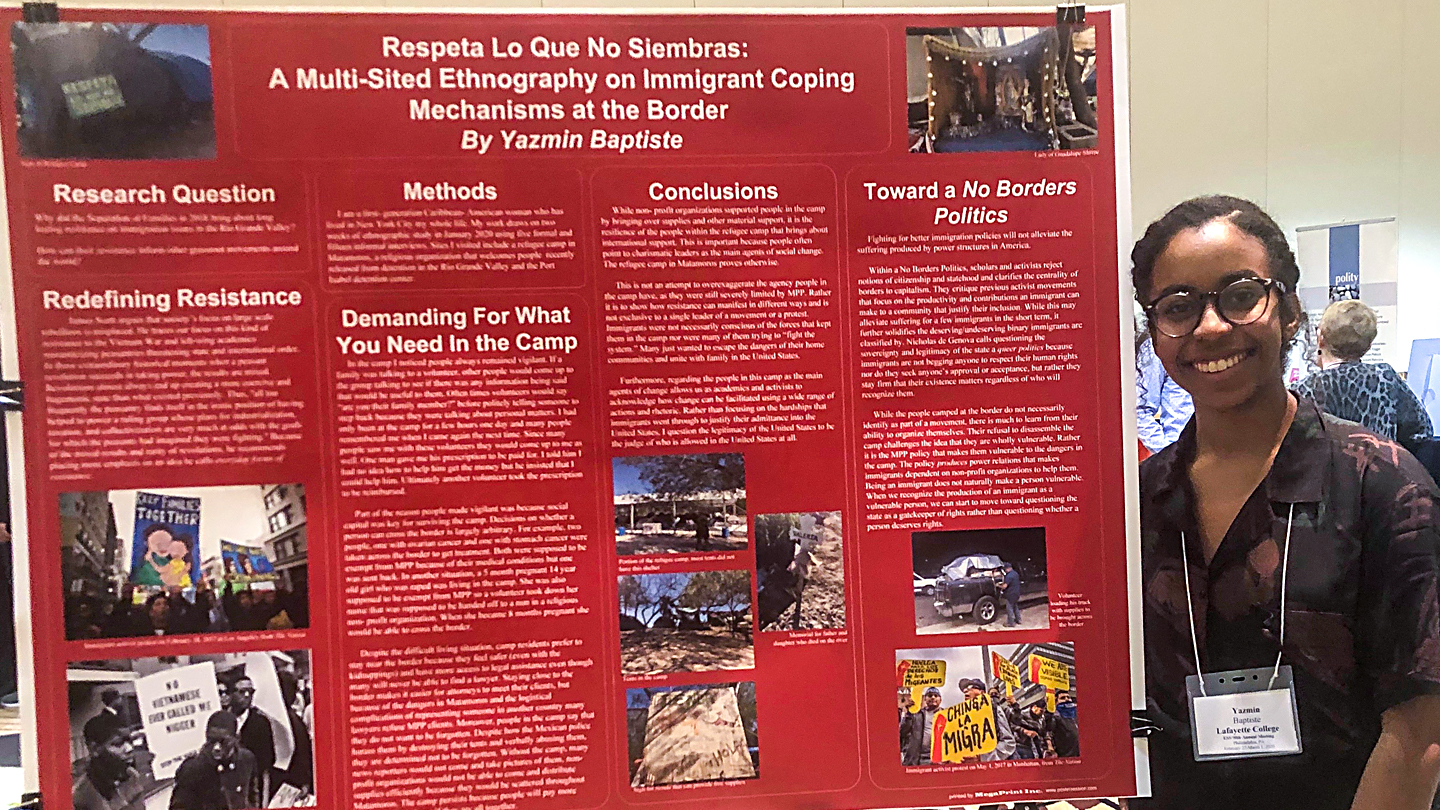 “In my honors thesis, I talk about thinking of immigrants as more than just a vulnerable population and thinking about the ways they impact and live at the border, rather than just thinking we are impacting them,” she says. “I know a lot of people who are undocumented and who create these beautiful communities and who use the resources they have to benefit others. I really like the idea of working in border communities, because I think they’re fascinating places.”

In February, Baptiste also received an award from Eastern Sociological Society for her presentation of her senior honors thesis, “Respeta Lo Que No Siembras” (“Respect What You Don’t Sow”), which is focused on her experience conducting ethnographic fieldwork at the refugee camp at Matamoros.

“It was really nice to have the scholarships from Lafayette and IES Abroad to enable me to do all these really cool things,” Baptiste says. “A lot of times students just don’t know where the funding is even though there’s funding available for us. I didn’t think studying abroad was even a possibility for me at all until I asked. There is definitely funding out there, especially for students of color in higher education. My advice is to just go to the financial aid office and ask what opportunities there are for you, because there are people out there who are more than willing to help make this dream of yours come true.”