Eric Hupe led a private tour of the 16th-century Medici Chapels in Florence in December—no tourists, no lines, no jet lag, not even that damp, musty smell sometimes associated with old European museums.

Coming up to the ornate marble tomb of Lorenzo de’ Medici, Duke of Urbino, Hupe, assistant professor of art history, guides a lone visitor through the vaulted chamber, pointing out details of Michelangelo’s magnificent sinewy sculptures and sarcophagi in a mausoleum of one of the most influential patrician families of the Italian Renaissance. 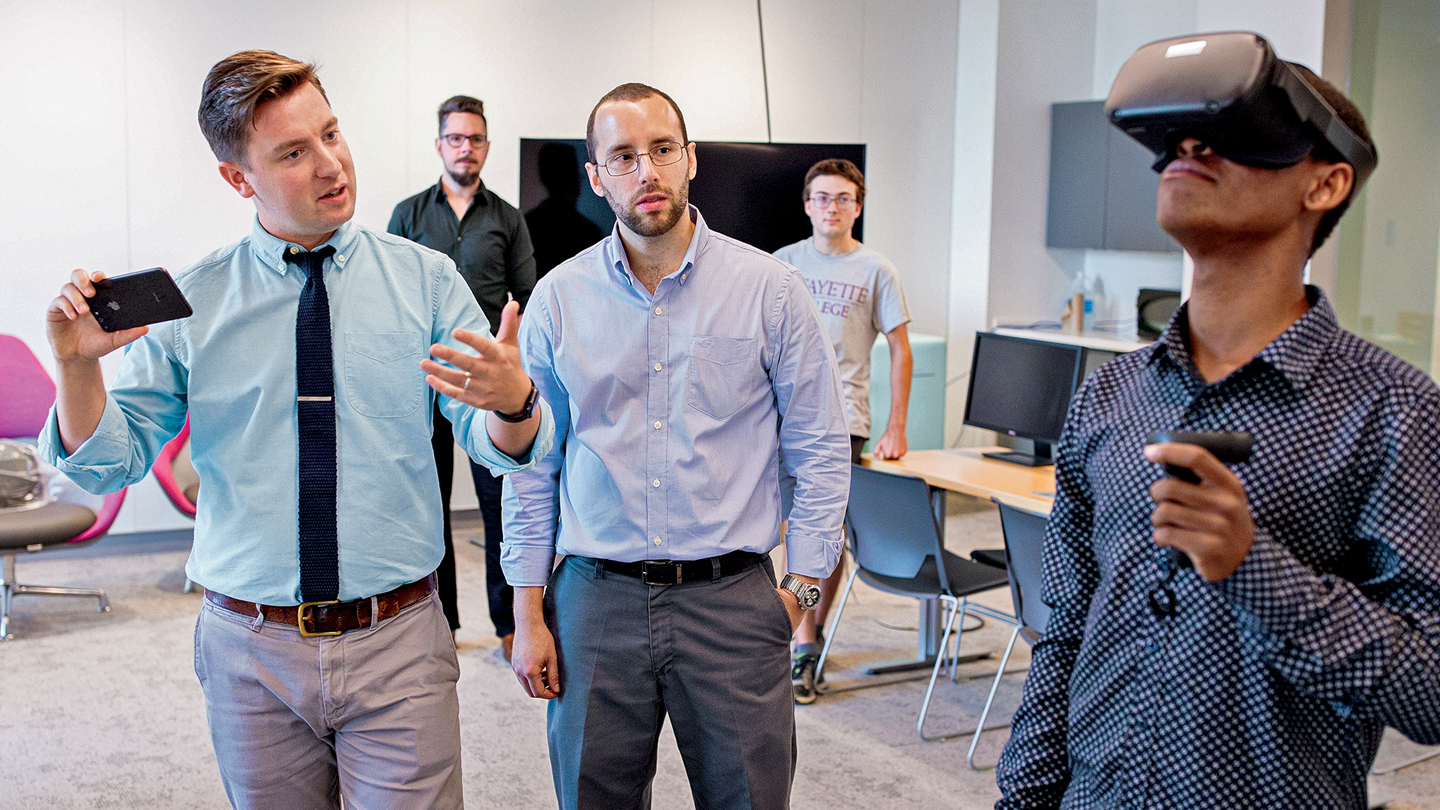 During a 2019 session, Profs. Eric Hupe (left) and Christian Lopez demonstrate the use of virtual reality to enhance educational experiences.

In this virtual reality environment, Hupe, as a digital docent, uses a floating Sharpie to make notes and direct attention to details and textures in ways that would be impossible or forbidden in the actual space.

Working in collaboration, Hupe and Christian Lopez, assistant professor of computer science, who also works within the Mechanical Engineering Department, hope to bring about a wider use of VR technology at Lafayette College. With the technology becoming more affordable and sophisticated, they see limitless possibilities for it to enhance students’ learning and engagement and be applied to the arts, humanities, sciences, and engineering.

The recently completed three-dimensional simulation of the Medici Chapels, built with digital images Hupe and Mallory Brown ’22 (art history and government and law), collected during a visit to Florence last year, is a tangible outgrowth of Hupe’s work with several students.

“I want students to communicate with art and feel its value and its importance,” Hupe says. “And this provides such a more immersive experience so that they feel as though they are actually there, that they belong there, that this is part of their building a memory and an experience of it. That’s really important.

“I’m less worried about the sheer number of works of art that a student is encountering in a given semester,” he says. “I’d rather have them have really deep experiences with singular works.”

With VR, the potential for experiential learning is limitless, transcending time and space. It’s possible to bear witness to the rise of the Great Pyramid of Giza, the premiere of Beethoven’s Symphony No. 9, even Lafayette’s triumphant arrival in New York Harbor in 1824. Less romantic but equally relevant, VR can be deployed to improve workflows in a manufacturing facility or to test a new assembly process.

“VR has liberated us, in a certain way, to take some chances,” Hupe says. “I think that it’s helped me actually get away from the format that I was trained in and thinking that this is how a class has to run.”

In Hupe’s course last semester on Baroque art, discussions surrounded a chateau that served as an aristocratic residence, a precursor of the Palace of Versailles.

“So we talked about Versailles, but through this other, earlier chateau, and they did a whole virtual tour of the entire space and had a set of guiding questions to make sense of it,” Hupe says. “There’s something magical about just dropping them into a place and asking, ‘How do you interpret this? How do you make sense of it?’”

Just a generation ago when Hupe was an undergrad, an art history student would have to internalize a 300-image slide list for a midterm.

“It was like, maybe I can remember three facts from half of these slides,” Hupe says. “Now, with VR, I’m much more interested in having a student go to a museum and encounter a piece of visual art and respond to it critically. We’re teaching students critical analysis rather than the memorization of facts. It’s about empowering students to make sense of the visual world they encounter every day.”

An admitted control freak, he maintains academic rigors in the VR environment. “That’s always been in the back of my mind—how do we make sure there’s genuine learning happening, and this isn’t something that’s just a Disney World effect,” he says.

“Instead of having a 2D image, like a book or a slide or something, it just allows us to see a different perspective,” says Lopez, one of the authors of “Reinforcement Learning Content Generation for Virtual Reality Applications,” which was supported by the National Science Foundation.

Reaching the unreachable is a valuable benefit to VR, particularly during the pandemic. Lopez deployed VR in his Introduction to Engineering course, allowing him to show students the mechanical engineering labs and other equipment in Acopian Engineering Center.

“The pandemic forced us to rethink how we’re delivering and structuring our courses,” Lopez says.

As Lopez and Hupe build their community of practice to explore the interdisciplinary and pedagogical possibilities of VR, they face some obstacles, particularly the lack of tools, at the moment, to help create simulations to enhance the very specific and nuanced teaching that occurs at Lafayette. Building them from scratch is tedious and time consuming.

“There are not a lot of tools out there. That could be one of the big issues why faculty are not implementing VR more aggressively,” Lopez says.

“There may be an idea for a very unique VR class environment that aligns with a certain teaching style and supports a course objective,” he adds. “Whether you want to highlight a machine or a specific piece of art, the data is not out there, so you have to create it. That takes a lot of time. And that’s kind of the big challenge.”

To build VR environments, Hupe uses a technique called photogrammetry, which runs two-dimensional images through a computer software system that stitches them together, analyzes and collects data on each image, and then ties everything together to build the geometry of the space. For something as detailed as the Medici Chapels, the process can take months to complete.

“We can make more granular improvements with software that makes the 3D model, which we call a mesh,” Hupe says. “It can be manipulated and smoothed out; you can literally go in and sculpt it however you want, which has been really interesting because it brings in an aesthetic component. Students have to decide where to make the cuts in the actual model to bring down the file size.”

“They now have at least some entry knowledge of this software,” a skill that’s transferable in other disciplines, Lopez says.

While the creation of detailed VR spaces may seem daunting, the tools to experience them are getting better all the time. Wireless Oculus headsets have arrived on campus, allowing VR users to freely move about in their spaces without a limiting tether that may yank them back to actual reality when straying too far. Haptic gloves, which provide a sense of touch in a VR environment, also are becoming available.

David Shulman, David M. ’70 and Linda Roth Professor of Sociology, who is researching VR in a project that’s examining immersive experiences in the entertainment industry, advocates using VR in the classroom.

“One of the things you could do, for example, is in a criminology class, you can simulate solitary confinement in different correctional facilities,” he says. “This kind of experience can be used to understand and address social justice issues.”

“So, you can imagine, the mass communications class, it’s a gimme in terms of VR,” he says. This semester Shulman will have students complete exercises interacting in virtual spaces to gain more familiarity with what he expects to be a rapidly adopted communication medium.

In general, “I think it’s good for students to have a VR experience, to put a good helmet on and actually see what’s out there,” says Shulman, who encourages students to seek out the resources that Lafayette subscribes to, such as Mindscape Commons, a database of VR and interactive video content.

“Try VR and see what you can experience. I say to students, ‘Where would you like to go, Tokyo, Venice? Let’s put you in,’” he says. “I think it’s going to grow in serious classroom use. People like Eric and Christian are sort of the pioneers of really bringing VR to Lafayette in a mainstream way.”

Down the road, Hupe envisions a VR course that would take advantage of and bring together Lafayette’s interdisciplinary traditions.

“Lafayette is a place that would definitely encourage something like that,” he says. “We celebrate our strengths in engineering and the liberal arts, so why not bring those things together? This is the future. We need to start embracing it.”