It was once counted out as the Patriot League underdog. But in fall 2021, the Lafayette women’s volleyball team—under the intrepid leadership of head coach Ryan Adams—proved it’s a force to be reckoned with

When Ryan Adams was offered the opportunity to take over as head coach of the 0-16 women’s volleyball team at Lafayette in 2018, he knew there was nothing to lose and everything to gain.

Then an assistant coach at Bucknell University, Adams was one of the first hires made by Sherryta Freeman when she stepped in that same year as the College’s director of athletics. She hoped Adams could help turn around the historically unsuccessful team, which was widely viewed as the underdog by fellow Patriot League members. Rather than shrinking from the challenge, Adams embraced it—despite having never before held a head coaching position.

“It was an opportunity for us as a group to create our own narrative,” says Adams, the program’s second-ever full-time head coach. “We bought into the idea that nobody wants or expects us to be good. Nobody cares about our success—only we do. So, let’s do it for each other. Let’s prove them wrong.”

With an indefatigable work ethic and an ironclad will to get stronger as a team, the women achieved what no one knew they were capable of. 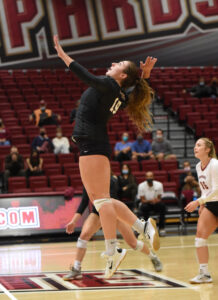 During fall 2021, the team didn’t just break program records—it annihilated them. Aside from clinching the most conference wins in 10 years with 13, the women and their coaches also pulled off a season of historic firsts. Leanna Deegan ’22 and Adams were named the Patriot League’s Player of the Year and Coach of the Year, respectively—recognitions the program has never before received. Deegan led the nation in kills per set (5.7) and points per set (6.1), while the Leopards managed season sweeps of all but three conference opponents and outperformed American University for the first time in the Patriot League era. The team also featured three All-Patriot League honorees—Deegan on the first team, and Madi Wahrmund ’22 and Katie Weston ’24 on the second—and was seeded second in the postseason tournament.

“For the seniors who have been together from the start, the fall season was incredibly gratifying,” Deegan says. “As freshmen, we didn’t win a Patriot League match. As juniors, the pandemic stole most of our season. We were picked to finish near the bottom of the league in the preseason rankings this year. But we came into this year feeling like we could surprise a lot of people.”

There was no single key to the team’s success. Rather, it was a mixture of elements that came together to create the perfect storm that swept the league.

“In three seasons, our program has progressed to the point at which we are competing for Patriot League championships, and that is a tribute to the dedication of our coaching staff and the talented student-athletes representing us,” Freeman says.

Throughout his nine-year career as a women’s volleyball coach, Adams has demonstrated time and again his natural talent for establishing a winning culture among the teams he’s led. Adams—who played volleyball on a scholarship at California State University, Northridge—got his start in 2012 when he became a volunteer assistant coach at University of Idaho and served as an academic coordinator for the athletic department. There, he brought the team to the conference championships, which it ultimately lost. Since then, Adams had a pair of stints as an assistant at Bucknell from 2014 to 2016 and in 2018, with one season spent coaching at William & Mary in between. In his first two years at Bucknell, the team racked up 21 combined wins, including 13 Patriot League victories, and was on the doorstep of the conference tournament berth in 2015. His leadership played a large role in the program’s first winning season in nine years. 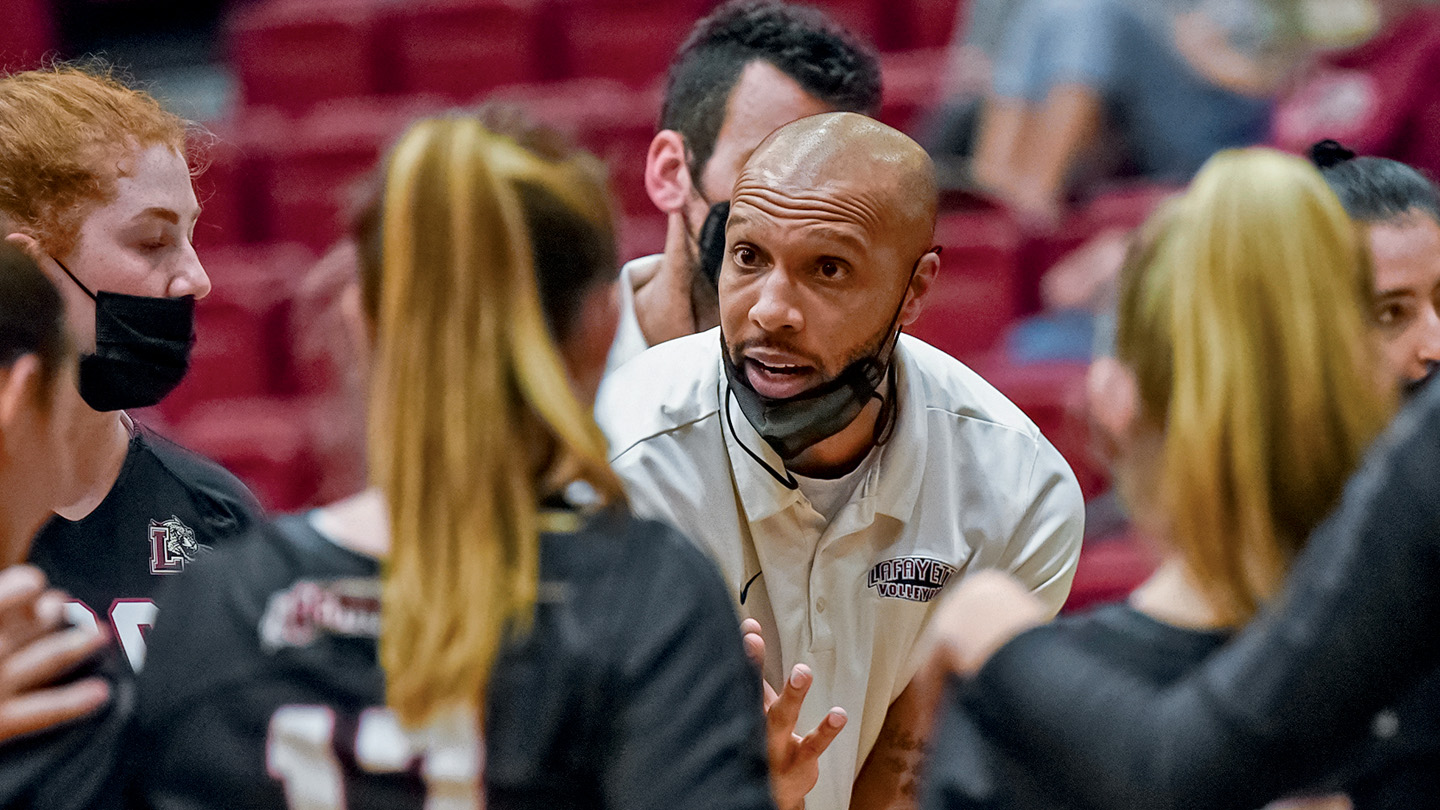 Along the way, Adams developed a coaching style that emphasizes what he calls the three pillars of volleyball: enjoy, improve, compete. The idea is to focus less on winning, and more on becoming well-rounded athletes.

“We’re not position-specific, and we do all-skill training,” Adams says. “Every minute in the gym is an opportunity to have fun and enjoy our time together. We try to get a little better every day, and we practice as hard as we can. While we do keep score, it doesn’t define who we are—we see it as a learning opportunity.”

Using the pillars as a guide, Adams made key alterations to the women’s volleyball program during his three years at Lafayette. First, he did away with the captain role to give each player a greater sense of ownership of the team. “Everybody has the opportunity to step up as a leader in their own way,” he explains. He also sat down with the players to collectively reevaluate the team rules and expectations, and set new standards that were agreed to by all.

“Coach Adams gave us leeway to figure things out on our own,” Deegan says. “He has always been supportive and has believed in us from the beginning.”

But the true driving force behind the program’s stellar season, Adams says, were the players. With underclassmen coming into the academic year ready to play and the upperclassmen keen on making up for time lost to the pandemic, this particular group shared a special bond from the start.

“We’re supportive of one another, and we’re friends on and off the court,” Deegan says. “We’ve been through so much together. I’m proud of the mark that our group has left on the program and that we’re leaving things in better shape than when we first stepped on the court. I have so many memories that I’ll cherish forever.”

“To me, [the team’s historic season] is not a surprise, even though it might be to everybody else,” Adams adds. “I knew what incredible people we had in the gym. And even if we would have lost every single game, I still wouldn’t trade any of the players for other people, because they are a joy to be around. Each and every one of them showed up, willing to learn and get better, and they worked hard. At the end of the day, it’s all because of them. They were ready for change, and they embraced it and embodied it.”

Women’s volleyball wasn’t the only team to bring on the heat during fall 2021. Here’s a look at some more of the season’s triumphs across Lafayette sports:

Finished with a 14-6 overall record and qualified for the Patriot League Tournament championship game, where they lost to host American 2-1.

Audrey Sawers ’22 and Lineke Spaans ’25 nabbed Patriot League Offensive Player of the Year and Rookie of the Year honors, respectively.