From corporate employee to rising Hollywood star: How placing blind trust in himself and his education led Vaughn Hebron ’13 to success and true happiness

Three years. It took three years of working in sales for Vaughn Hebron ’13 to realize that a comfortable job in corporate America might fill his wallet, but not his soul.

When the Baltimore native came to Lafayette in 2009 on a partial football scholarship, he—like many starting out in college—had one goal: to make a lot of money. Taking what he thought was the quickest route there, Hebron earned a B.A. in economics and business, with a minor in Africana studies, and eventually landed a job as a traveling pharmaceutical sales account manager in 2014.

But Hebron found himself at a crossroads a few years later, when his position became the casualty of a mass layoff. He knew then that he could either continue down the corporate path, or he could take the opportunity to pursue a passion that was reawakened in him when he asked himself what would truly make him happy: acting. It was a career path that offered less stability, but nevertheless tugged at his heartstrings.

He chose the latter, despite being offered another sales job just one day after being laid off. Betting on himself, Hebron gathered his belongings and his courage, and he headed out to answer what he believed was his true calling. It paid off. 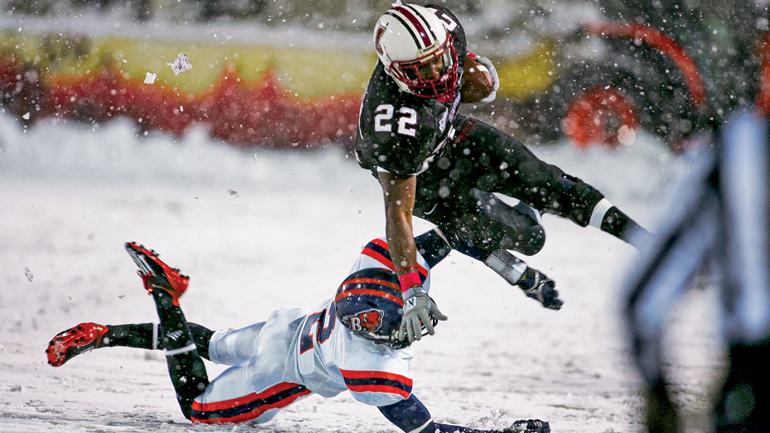 In January 2017, Hebron moved to Atlanta, where he got the lead role in his first short film and took several acting classes to develop his craft. Eight months later, he went all in on his ambitions and booked a ticket to Los Angeles, the city he now calls home. Hebron landed several smaller commercial and TV roles shortly after, but his big break came when his work on the 2018 comedy TiTi Do You Love Me on Zeus Network caught the attention of entertainment titan Tyler Perry a year later. Perry personally invited Hebron to audition for a series regular role on BET’s The Oval—he got it, and it immediately launched his Hollywood career to new heights.

The Oval became the No. 1 primetime show on cable after its 2019 premiere. Since then, Hebron has starred in the reboot of the iconic series The Game on Paramount+, and he’s made his big-screen debut alongside Will Smith with the film King Richard, which has garnered over 100 award nominations—including several Oscar nods—since being released November 2021.

Hebron shares how Lafayette and a leap of faith changed his life.

What was running through your mind the moment you decided to transition to acting?

Making money and having a good job are not what make you happy. What makes you happy is pursuing your true passions, the things that make you tick, that get you motivated and out of bed in the morning. That’s where you should spend your time and energy. I woke up one day and thought, I’m not going to go through the motions; I’m going to find something I enjoy doing.

What were the biggest challenges you faced when you made the switch?

[In sales], I knew where my success was going to come from. Acting is different. It’s not something you can predict or put a timeline on. You don’t know if you’re ever going to be successful. It’s something you have to have blind hope in, and pray that everything is going to work out. My biggest challenge was dealing with the unknown and switching my mindset from defined stability to lack of stability.

How did your experience at Lafayette help you navigate such a big change?

I grew up in Baltimore, and a lot of my early experiences were very urban. Because of that, I had a mentality that was kind of small-minded. Lafayette introduced me to people who think differently from me and who I never would have met had I stayed in Baltimore. Lafayette diversified me, made me more well-rounded, taught me life lessons that aren’t just for a certain group of people, and expanded the level of interactions I can have with people. I appreciate Lafayette for making me a better person who can adapt to any situation or person. Everything I learned from my classes, football, and the people I met helped me transition smoothly when I stepped into the acting world and had to learn new skills and work with people from all backgrounds.

Was there a particular professor whose lessons you’ll never forget?

Yaba Blay [former visiting assistant professor of Africana studies]. She taught me to be open and understand that everybody has a story and journey, and to respect that in all facets of life—even if you don’t agree with them.

In The Game, you play a stellar free-agent football player who gets a second chance at life. At Lafayette, you were a star tailback who made the Patriot League academic honor roll. How do you draw on your on-field experience for inspiration?

My experience was invaluable to this role. I was able to do all my own stunts. I almost forgot I was acting. It felt like I was back in my zone, back at Lafayette getting ready for a night under the lights.

Being an actor is very much like being a star on the football field. When I have the football in my hand, I’m in the spotlight, it’s my moment. But I still have to work with my teammates and bounce off of what they give me in a play. Now in acting, my manager, my agent, the people on set, and I all create a bigger team. When I’m in a scene, I have my lines and my character; it’s my time to shine. But I have to work off the other actors and the director, who’s like a coach.

Being on the team also taught me how to balance a lot of things at once. Staying on top of my workouts and my academics, I learned multitasking, time management, and responsibility. My Lafayette experience catapulted me into success in this career.

How does it feel to have been handpicked by Tyler Perry to play Barry Hallsen in The Oval, a drama about an interracial family living in the White House?

I grew up watching Tyler Perry plays and movies. Being able to work with somebody who is such an icon in the entertainment industry and in the Black community was an extreme blessing. I’m thankful to say I’ve worked with him, and that I was part of his history and legacy.

Did you ever think you’d work on a film like Oscar-nominated King Richard with Will Smith, telling the story of how Venus and Serena Williams’ father helped them make sports history?

I met Will at a Tyler Perry event, and I thought, ‘One day, we’ll be on set together. I’ll get there.’ Four months later, I got cast in King Richard. It was a dream come true to sit next to Will in the hair and makeup chair, cutting jokes, and to watch him work. I think King Richard is going to be another staple in Black culture and film—and in film in general—because it speaks to people who have started at very low beginnings and worked their butt off to get to a higher level.

Where can we see you next?

My upcoming film, The Devil You Know, written and directed by Charles Murray for Lionsgate. I had the great opportunity to star opposite Omar Epps and Michael Ealy in this film. It’s about four brothers—two are on the straight and narrow, and two are making bad decisions that have the potential to tear the family down. I think a lot of families are going to relate to it. There are no release dates yet, but we should be hearing something soon from Lionsgate! Stay tuned.

Any words of wisdom you’d like to leave us with?

Take full advantage of the resources Lafayette has to offer—the network, professors, students. Get involved in as many things as you can. Also, take time to learn yourself and think about what you want to do with your life. If what you want and what you’re doing aren’t matching, it’s going to tear at you. Find your passion, and go after it—even if you have to start over.