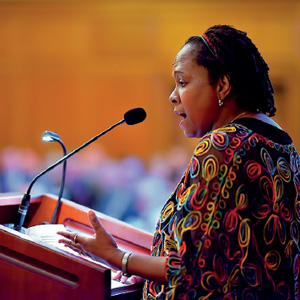 Alma Scott-Buczak didn’t come to Lafayette 46 years ago to be a pioneer—like so many others she’d merely fallen for the campus.

But Scott-Buczak was a trailblazer in more ways than one. She was a member of the Class of 1974, the first to include women. And as an African American, she had a chance to be part of the College’s growing diversity in its nascent stages.

“That seemed more significant than being [at Lafayette as] a woman,” she says.

In July, Scott-Buczak assumed a new role with Lafayette. She is the College’s new associate vice president of human resources. The move isn’t exactly a homecoming. She has maintained deep ties with the College for years—serving on the Board of Trustees since 2003, most recently as vice chair of the committee on student life. She also has been a member of the development and alumni relations committee, the ad hoc committee on investment policy, and the implementation and assessment group on Greek Life. She concluded her service to the Board on June 30.

She still recalls the lessons of the 1970s, when the College was learning to welcome new people. The transition was good-natured but awkward at times. The previously all-male college installed bathtubs in its women’s dorms—what is today Ruef Hall—“because they thought that was what women wanted,” she says. Today, Lafayette features coed dorms and showers, and 47 percent of the students are women.

At first, she found she needed help opening doors. Literally. The mammoth door at the entryway to Pardee Hall was too heavy for her to open. She had to depend upon men to hold the door for her until a few weeks later when the college replaced the hinges to make it easier to open, she says.

A group of “old guys” often checked on her well-being, inviting her to eat in the faculty dining room. “I found out later they were the Trustees,” she says.

At the same time, organizations such as the Association of Black Collegians were springing up. It wasn’t perfect, but students learned from one another, she says. That’s what she carries with her, through a career that led her to a position as assistant executive director of human resources for New Jersey Transit, a job she started in 2002.

“My experience [at Lafayette] provided me with the ability to see the best in everyone and everything. To look for the good in what was around me,” she says. “Lafayette fosters this lifelong learning mindset. That’s what really helped.”