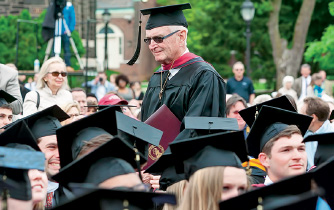 All his life, J. Ronald “Bud” Martin has loved playing the organ and piano. Bach in particular.

So, he decided to enroll in Lafayette as a music major—nearly 50 years after he graduated the first time.

In May, Martin, a 1966 graduate, a Ph.D. and retired chemical and biomolecular engineering professor, crossed a stage with dozens of kids just starting out in life to receive his second Lafayette diploma, this one indicating his A.B. in music.

“People ask me what I’m going to do with it,” Martin says of his diploma. “I tell them, ‘Hang it on my wall.’”

After his graduation, John Plumeri ’78, P ’09 “the very first student I ever taught” threw him a graduation party. Plumeri’s son had just obtained his Ph.D. from Lehigh University, so it was a joint party. Martin said many of his friends attended.

He hadn’t set out to get a second bachelor’s degree. Before he retired in 2012, he signed up for a course in music theory. He wasn’t seeking to start a second career or solve some great puzzle. “I wanted to understand” music better, he says.

“I knew if I audited the course, I was just going to goof off,” he says. So Martin signed up for college credit. He took one course. Then another. Then devoted himself to obtaining a degree.

“It was very strange walking into class,” he says. “There was a lot of ‘Why are you here?’”

But that faded quickly, and soon he befriended his fellow students and worked on projects with them.

Martin’s Ph.D. creds didn’t earn him a free pass. He had to fulfill general-education requirements, such as a Spanish course. During one class, Aging Studies with Jamila Bookwala, professor of psychology, “I was the resource.” Students with questions on aging looked to their more senior colleague for answers.