This is the story of a sum of money. During the closing months of World War II, a group of U.S. servicemen stationed in Europe gave $3,000 to their superior officer, a man named Maj. J.H. Tarbell. The GIs wanted to get rich quick after the war, and they believed Tarbell was the right man to invest their money for them.

Seven decades later, that money belongs to the Lafayette College Investment Club, and students are using it to better understand how trends, times, and American business affect the rise and fall of the financial market.

Today, the pile is much bigger—think six figures—and growing—thanks to generations of Leopards who credit the club with giving them their initial hands-on experience with the stock market.

SHOW ME THE MONEY!

In the states, Tarbell was well-known among economists. A professor at University of Illinois, he studied finance at Syracuse, Cornell, and Princeton universities, and Federation Universitaire Internationale in Geneva, Switzerland. In 1934, he helped write the law that created the U.S. Securities and Exchange Commission.

Then came the war, and Tarbell went off to do his part, instructing pilots and serving in the Army Air Corps as commanding officer of an intelligence unit.

He also taught finance at the American University in Biarritz, France, to soldiers hoping to jump start their peacetime college careers.

After Germany surrendered, a group of Tarbell’s soldier students asked him if he’d help them make a big score in the stock market. “I protested,” Tarbell wrote in 1958. Stock market investments are for the long haul, he told them, not quick jackpots. Also, “it was probably against military regulation anyway, thus would not be acceptable to the commanding general.”

So one of the students asked the general for permission. To Tarbell’s surprise, the general not only approved, but said he favored the idea. The use of real cash would make the class more realistic.

Tarbell relented; the service members in the class passed a hat. By then, however, it was 1946 and the war was over. The GIs from Tarbell’s class were headed home.

So was Tarbell, back to University of Illinois, where he expected to resume his former job as a professor.

His students divided the profits and gave Tarbell $3,000, the equivalent of $45,000 today. Take the money back to your college and start an investment laboratory there, the GIs told him.
But when he arrived at the university, he discovered that his faculty housing had been repurposed for students. Returning World War II veterans were piling into colleges around the country making up for lost time. University of Illinois’ population had grown from 12,000 to 30,000, and Tarbell was without a home.

He was considering living in the parking lot when then Lafayette Dean of Students Frank R. Hunt offered him a job complete with a place to live. The College had just hired a new group of professors to fill out its economics department.

Tarbell brought the $3,000 with him to Lafayette. 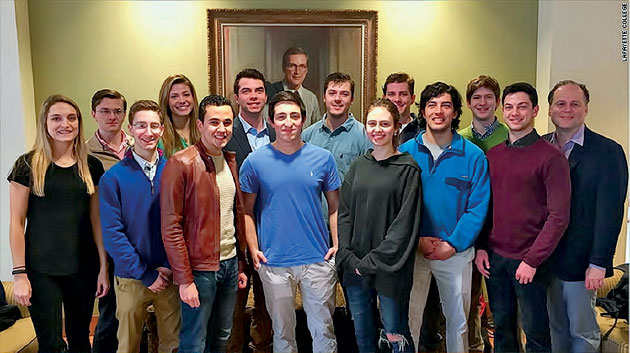 Current members of the club

The first thing Tarbell did with the money was create a stock portfolio he dubbed the Lafayette Veterans Research Investment Foundation. He bought the first security in September 1946. Most of the directors of the foundation were the men who’d given him the cash.

Then Tarbell made good on his promise to use the fund as the laboratory experiment the GIs and the general had envisioned—he allowed students to “play with” the money, he told Lafayette magazine in 1987, about a year before he died. Many of his Lafayette students were returning war veterans. They made investments, tracked performance, and made reports to the veterans who’d made the initial investment.

He hadn’t found anyone to take over management of the fund, so he donated a portion of it to places like Massachusetts Institute of Technology, University of Rhode Island, and the Guggenheim Museum.

The rest of the stocks and cash sat dormant for a number of years, until 1972, when Tarbell donated all of it to Lafayette to create a permanent student investment club.

Interest in the club was waning in 1992 when Prof. Donald Chambers took over as adviser. The club met three times a month to examine the fund’s performance and decide on future investments.
Chambers opted to try a radical new economic approach to increase membership.

“Let’s serve pizza at every meeting,” Chambers told them. It worked, and interest in the program increased.

“We bought AOL,” says Phippen, who today is a product manager for Greenwich Associates in Stamford, Conn. They also purchased shares of Dell Computers. “Tech stocks tended to be sexier
at the time.”

It parlayed well into a career for Phippen, who worked for a time as a broker on Wall Street.

He credits Chambers for his interest in business. He came to Lafayette unsure of direction, but Chambers’ clear explanation of complex terms he’d heard—words like derivatives—opened up new worlds to him.

The investment club was good training for his career, Phippen says. During meetings, the members—at the time, predominantly men­—examined the fund’s performance, studying each company so they understood exactly the business in which they were investing.

That year, which was the beginning of the dotcom bubble, internet and computer stocks were all the rage. The fund jumped 22 percent in value to $126,000. The New York Times noted the success.

“Not bad for neophytes,” read an article in the April 21, 1996, edition. “While the performance was obviously aided by a bull market in stocks, the portfolio still has about a quarter of its assets in bonds and cash.”

Zdenek Hezky ’97, who was a member of the club at the time, credits those early days with his creation as an investor.

“I was just a simple Ontario boy,” he says. The club took trips to Wall Street, visited boardrooms, and toured the exchange. Hezky could see decisions in which he played a role at work in the world of finance.

In those days, Hezky was a proponent of investing in companies with steep plow-back ratios—the amount of money they reinvest in their own stock.

“I was naïve,” he says. Today, he is director of capital markets with CIT Group, the New Jersey-based global capital management firm. Like Phippen, Hezky’s early years after Lafayette were spent in finance before he returned home to Canada.

He hadn’t thought of the Investment Club in years until he recently learned with surprise that the fund had exploded, having ridden the economic trends of the 21st century—the shock of Sept. 11, 2001, the real estate bubble burst, and resulting 2008 Great Recession. More recently, it survived Great Britain’s vote to leave the European Union.

Today, that initial soldiers’ investment in financial education is the oldest student-run investing club in the country.