When you walk into Easton’s new City Hall, look up. You’ll see history flowing toward you.

It’s the handiwork of Jim Toia, Lafayette’s resident naturalist/artist. The railing from the second floor that overlooks the entryway is a waterfall of aluminum.

“I really loved the nod they were giving to historical elements and the materials that are all part of the design,” says Toia, the College’s director of Community-Based Teaching. Easton loaded its new home on South Third Street with symbolism for the city’s history and environment. (City Council Chambers is designed to look like the huts of the Native American tribe that once populated the region, for example)

So architect Spillman Farmer reached out to Toia, who uses natural elements in his artwork, to design a railing. “Canals played a big role in Easton’s economic welfare,” Toia says.

He spent time observing the flow of water around the city, particularly watching it spill over dams at places like the Bushkill Creek dam above North Third Street. He photographed the water, then attempted to copy the flow in his design.

Jim Caffrey, a Stockertown, Pa., metal fabricator, cut the metal and constructed the railing based on Toia’s recommendations.

Toia designed railings and furniture for years before he took his job with Lafayette. He used to be a welder.

Toia designed a 55-foot-long wash of aluminum that mimics the flow of Easton’s three waterways—Bushkill Creek and the Lehigh and Delaware rivers.

“I hung up my hat as a designer quite a while ago,” Toia says. “It was fun to come back into it and do something that’s very public oriented.” 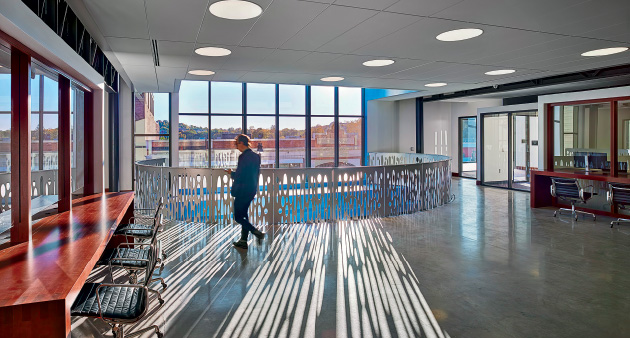