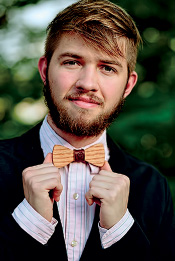 Zechariah Nelson ’19 had not done well on a Calculus 3 test. Upset and restless, he went for a walk, searching for a productive way to work through his frustration.

As he walked, he thought about the entrepreneurial lectures he had attended on campus earlier in the year, which had stoked his interest in self-guided success. He also recalled some of the business ideas he had considered since: more-manly eye masks (too fussy), a machine that recognized rip currents in the ocean (too complicated).

After a while, he found himself in the campus bookstore, browsing the apparel section. “It hit me to make wooden bow ties,” says Nelson, an engineering studies major.

This bolt of inspiration wasn’t entirely out of the blue. “I received a wooden bow tie two Christmases ago after seeing one online,” he says. “I thought it was neat.”

Soon afterward, he approached Erin Evans, associate director of internships at Lafayette, to help him figure out steps he needed to take to get his venture off the ground. She quickly connected him to Ken Londoner ’89, Michael Presto P ’18, and professors who could answer his questions about manufacturing, business plans, and distribution.

Nelson then got busy with Collegiate Wood, the name he settled on for his company that designs and handcrafts bow ties. He and his father, a retired pediatrician, scoured Craigslist for a router, band saw, belt sander, and planer. After finding the equipment, the first thing they carved out was some space in the family garage in Havertown, Pa.

Nelson was in charge of the wood, and his father took hold of the leather. “The first three- to four-month period was the most painful,” says Nelson. “We made a lot of mistakes.”

With all the kinks worked out, sales began in earnest in May, with about 40 sold during the inaugural month. Collegiate Wood turns out three styles of ties—in oak, cherry, and walnut—each with a leather centerpiece stamped either with a Lafayette ‘L’ or a Leopard paw print. The ties are available through the Etsy online marketplace under the handle LafCollegiateWood. 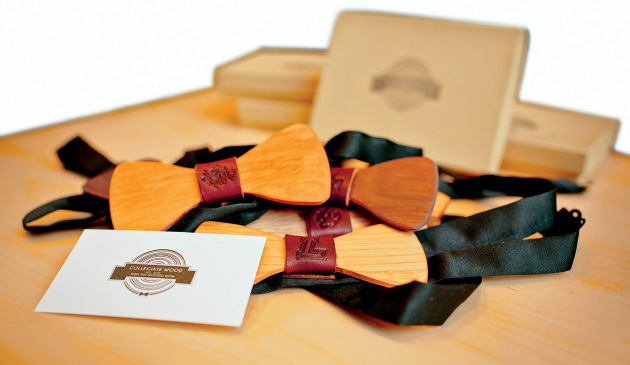