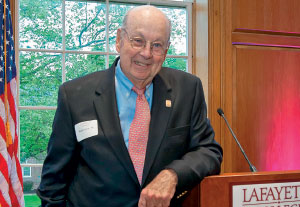 Two major gifts to the Live Connected, Lead Change campaign this spring advance the goal of fostering excellence and innovation in teaching and learning. 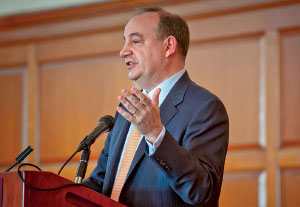 Walter A. ’59 and Kate Scott have provided a gift of undisclosed amount to establish the Kate and Walter Scott ’59 Chair in Engineering and fund an initiative to recognize and support exceptionally promising young faculty members in new ways. The gift also will augment an endowment fund the Scotts established in 1996 to create the annual Marquis Distinguished Teaching Awards.

A gift of $2 million from Robert E. ’84 and Susan Sell will endow a new professorship in honor of Bob’s parents. Ian Smith, professor of English, is the inaugural recipient of the Richard H. Jr. ’60 and Joan K. Sell Chair in the Humanities.

Increasing the number of endowed professorships is a key element in the College’s new strategic direction. Gifts to the campaign have endowed 12 new professorships and other key positions, and provided substantial resources to support research, professional development, and other initiatives to ensure that professors can have an even more profound impact as teachers, scholars, and mentors.

A previous campaign gift by the Scotts to the campaign enabled the College to create a magnificent academic facility, Scott Hall. Given by the Scotts in memory of Walter Scott’s parents, Ruth Hawkins Scott and Charles Lukens Scott, it opened in 2009 as the home of the Office of the Dean of Academic Advising and Co-Curricular Programs, the Center for the Integration of Teaching, Learning, and Scholarship, and other programs that support student and faculty success. Their support also includes an endowed scholarship fund that provides financial assistance to Marquis Scholars. In 2000, the Scotts were inducted into the Société d’Honneur, which recognizes exceptional lifetime generosity on the part of alumni, parents, and friends.

A civil engineering major at Lafayette, Walter Scott earned graduate degrees from University of Illinois and Yale University. He held key positions with several major corporations, including, most recently, chairman of the board of Assured Guaranty Ltd. in Bermuda.

The Sells were inducted into the Société d’Honneur in 2011. In addition to his late father, Bob Sell’s ties to Lafayette include brothers Stephen Sell ’90 and Kyle Sell ’92, sister-in-law Robin Karcher Sell ’91, and cousin Erik Marsh ’95.

An economics major at Lafayette, Sell joined Accenture in 1984 and has held a variety of leadership roles in the company. He became a partner in 1995. Since 2012 he has served as group chief executive of Accenture’s Communications, Media and Technology operating group. He is a corporate officer of the company and a member of its Global Management Committee.

Sell has served as a Lafayette trustee since 2006 and assumed the role of vice chair of the board in July. He chairs the board’s Committee on Student Life and is a member of the Committee on Compensation and the Executive Committee. Previous board assignments include serving as a member of the committees on Information Technology and Development and Alumni Affairs and chairing the Nominating Committee.

A past president of the Maroon Club, Sell was president of the Alumni Association from 2004 to 2006 and chaired its Long-Range Planning Committee. A former board associate and member of the Alumni Council’s Executive Committee and Alumni Affairs Transition Team, he was an alumni member of the search committee that identified Daniel H. Weiss as Lafayette’s 16th president and a member of the Committee on the Presidential Inauguration. Sell also served as a trustee member of the search committee that identified Alison R. Byerly as Lafayette’s 17th president. In 2006 he received the Alumni Association’s George T. Woodring 1919 Volunteer-of-the-Year Award.

He was a member of the Live Connected, Lead Change campaign Steering Committee from 2008 to 2013.