Starting with Philadelphia, we follow the Marquis’ journey-both as a major-general in the Continental Army and then as a 14-month “Guest of the Nation” — through a different city each issue of the magazine.

The Marquis de Lafayette was 19 when he first came to America in 1777 to fight for its freedom. When he returned in 1824 for his farewell tour the Frenchman was 67. By then the entire nation celebrated his name as he made his way through all 24 states in the Union. People turned out by the tens of thousands to see him, and major cities attempted to outdo each other in the grandeur of their welcome.

Starting with Philadelphia, we follow the Marquis’ journey—both as a major-general in the Continental Army and then as a 14-month “Guest of the Nation”—through a different city each issue of the magazine. College Archivist Diane Shaw will serve as our trusted guide, leading us through the cobblestone streets and thoroughfares that the College’s namesake once traversed. 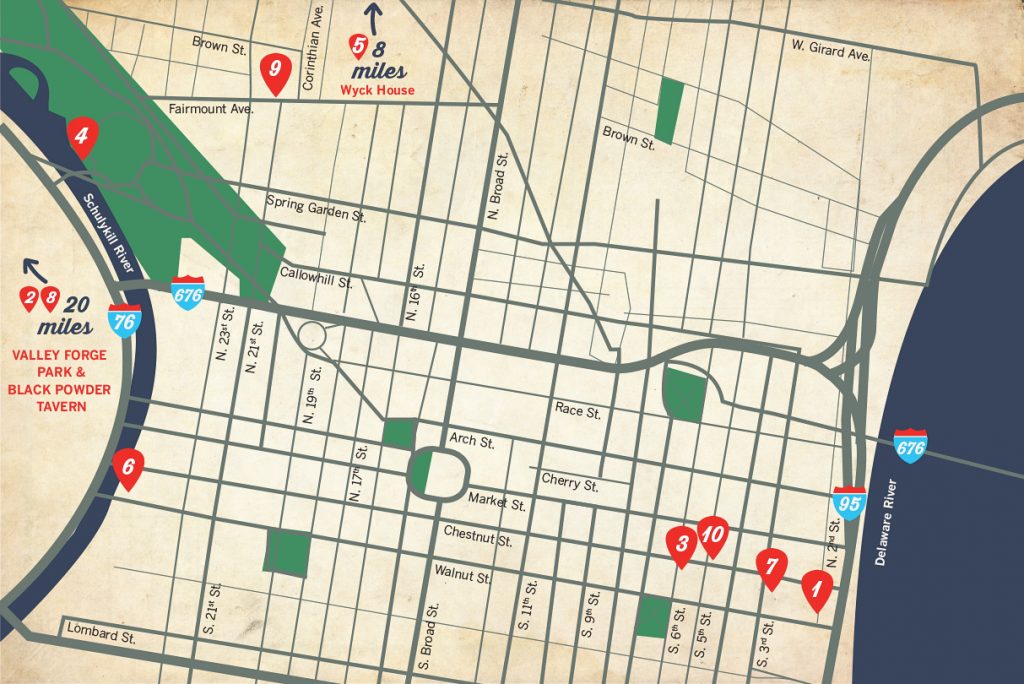 Lafayette first met with George Washington at this popular watering hole at 10 p.m. on July 31, 1777, after expressing an interest to serve on the general’s staff. “Although he was surrounded by officers and citizens, the majesty of his figure and his height were unmistakable,” Lafayette later wrote of Washington in his memoir.

Cur Non Try one or a flight of beers crafted from the original recipes of Alexander Hamilton, Ben Franklin, and Thomas Jefferson. 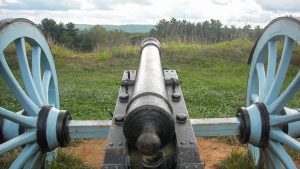 After recuperating from being shot in the calf during the Battle of Brandywine, Lafayette joined Washington and the Continental Army at Valley Forge during the winter encampment of 1777-78. Elevated to the post of commander of a division of troops, Lafayette used his own money to buy uniforms and muskets for his men and lived among them during the coldest part of winter. The park is a 50-minute drive from downtown Philadelphia.

Lafayette and his entourage arrived on the outskirts of Philadelphia on Sept. 27, 1824. A few days later the city threw a welcoming parade that has been described as the “most sumptuous pageantry of all events” held during his tour.

The procession consisted of 20,000 marchers and stretched for 2 ¼ miles through 13 triumphal arches that had been erected to represent each of the original colonies. More than 160,000 people came out to watch the procession that culminated at Independence Hall, which had been lavishly refurbished after standing nearly empty for 25 years. The restoration of the building for his visit is credited with starting the historic preservation movement in America. 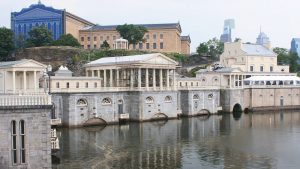 Lafayette returned to Philadelphia for another eight-day visit in the last days of his farewell tour in July 1825 so he could witness the dedication of the Water Works. Despite 104-degree temps that day, Lafayette maintained his vigor, pronouncing the facility “the perfect embodiment of the American Government, in which were combined simplicity, power, and economy.”

Wanting to show his son, George Washington Lafayette, sites from the Revolutionary War, Gen. Lafayette visited Wyck House in Germantown, which had been used as a field hospital, on July 20, 1825. A reception was thrown in his honor, and a magenta rose, named the Lafayette rose, was planted to commemorate his visit. The garden at Wyck House is one of the few places where the Lafayette rose still blooms today. It also blooms in President Alison Byerly’s garden, a gift from Robert E. Jones ’42 in honor of her inauguration.

Cur Non View the blue velvet chair brought back from France by Benjamin Franklin that Lafayette lounged in while visiting.

The State in Schuylkill—a private angling club founded in 1731 and purportedly the oldest continuously operating social club in the U.S.—invited Lafayette and his party to a day of fishing and presented them with straw fishermen hats. “Never,” wrote Lafayette’s secretary, Auguste Levasseur, “was a repast attended with greater gaiety, nor cheered by better wine.”

Cur Non Take a boat cruise of the Schuylkill. Patriot Harbor Lines offers tours that highlight the river’s beautiful scenery, unique architecture, and skyline views from a reproduction of a 1920s commuter boat.

7. Museum of the American Revolution 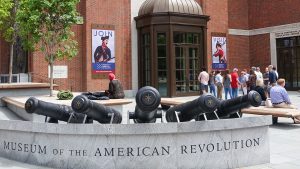 Who knew the Marquis was such a thoughtful gift giver? The museum, which opened in April, features one of the USA-marked swords and brass belt plates the Marquis gave to members of the American Light Infantry. Soldiers carried them into battle when they captured British Redoubt #10 at Yorktown on Oct. 14, 1781.

Cur Non Visit the William (’50) and Laura Buck Revolution Courtyard, which features a replica of the painting Washington Crossing the Delaware.

Built in 1746, the tavern served as a covert rendezvous point for George Washington, the Marquis de Lafayette, and other leaders of the American Revolution. It’s also believed that during the infamous winter of 1777–78 at Valley Forge, a major figure in the Continental Army, military mastermind Friedrich von Steuben, designated the tavern as a secret black powder munitions stash for Continental Army couriers. It is now a bustling restaurant with an impressive craft beer list. 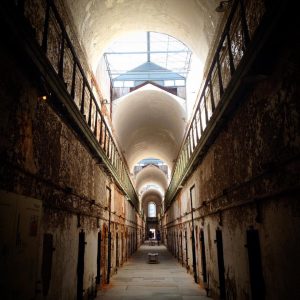 Opened in 1829 with sky-lit cells and fortress-like walls, Eastern State was once the most famous and expensive prison in the world. Touring it during construction in 1825, Lafayette is said to have commented that the exterior, especially the towers, reminded him too much of the Bastille prison in France.

The Marquis never slept here, but the 11-story building on the lip of Independence Mall bears his name. Kimpton Hotels purchased the vacant Lafayette Building in 2011 and converted it to a luxury hotel with 271 rooms and meeting space. A painting of the Marquis hangs in the Lafayette Ballroom.

Cur Non Stay the night and slip on a bathrobe bearing the Lafayette Building insignia. There’s even some that are leopard print.