“In baseball, as in life, all the important things happen at home.” -unknown

On hot summer nights, the window in his boyhood bedroom open to catch even the hint of a breeze, Kevin Moss ’04 could hear the voice of God. In an elegant, reassuring baritone, the voice would repeatedly intone: “Now batting for the New York Yankees…”

OK, the voice of God—so nicknamed by Reggie Jackson, among others—was Bob Sheppard, the former, longtime public address announcer who is as much a part of Yankee lore as anyone who wore pinstripes.

But it’s fair to say that the bright lights and roaring crowds—a mere two train stops from his mom’s apartment where he grew up in Harlem,  a 1.5-mile walk when the weather was nice—represented a slice of heaven for young Moss.

His mother, a four-decade human resources professional, would get tickets through her employers and take her son to as many games as she could. “I don’t know if she was that much of a baseball fan,” Moss says. “She did love the ballpark hot dogs, but I think she mainly just wanted to get me out of the house.”

I can’t remember not being a baseball fan.

Whatever the reason behind those trips, Moss was hooked the moment he saw the manicured field, the roof-line frieze, and the cheering crowds that until then had been a distant, unseen companion.

His mom signed him up for the newly formed Harlem Little League and arranged for her employer to sponsor a team. The ballpark was right around the corner. There were uniforms and coaches and umpires, accoutrements many inner-city kids didn’t have. 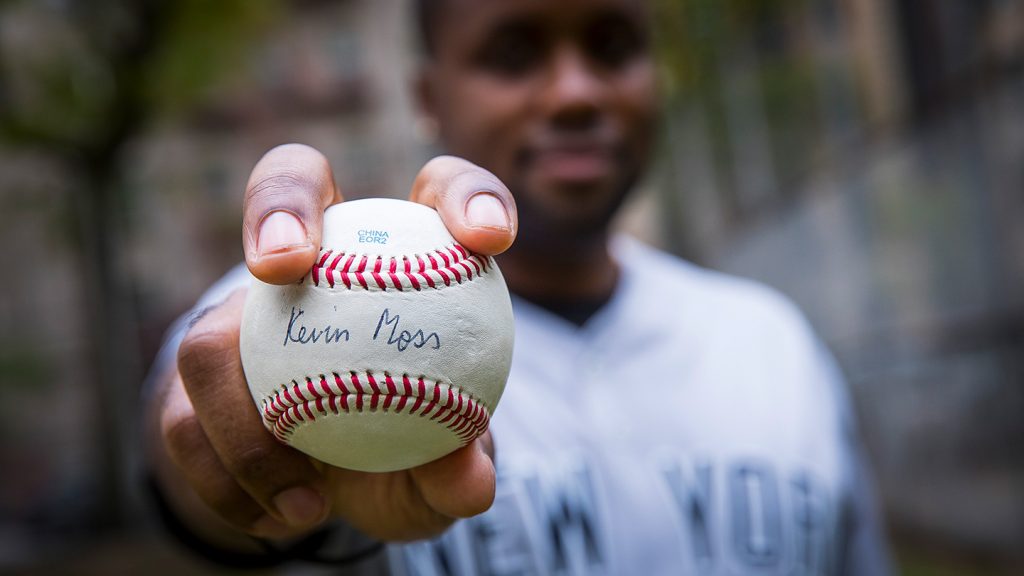 But his playing days with the Harlem Little League Wildcats—and his devotion to baseball—weren’t in vain.

Flash forward a decade or so. Moss is burned out from working as a child welfare officer in the South Bronx, where he investigated calls about child abuse and educational neglect. Sometimes he’d help remove children from their homes.

“It was the best thing for those kids, but it left me a train wreck emotionally,” he says. “I put my ID on the table and walked out.”

He started temping at NewYork-Presbyterian Hospital and coaching a team in the Harlem Little League, whose founder, Dwight Raiford, was an executive at MetLife. Moss had just completed a career assessment that suggested an aptitude for insurance underwriting, so he arranged a meeting with Raiford to get advice.

It was the best thing for those kids, but it left me a train wreck emotionally.

Turns out he knew his heart all along. While sitting in Raiford’s office, Moss spotted a photo of him with then Major League Baseball Commissioner Bud Selig. In a moment of clarity, he admitted out loud that insurance would just be a job for him. What he really wanted was to work in baseball.

A three-days-a-week internship turned into a full-time job at Major League Baseball. At first Moss helped the RBI program get underserved kids interested in the sport, including organizing youth exhibitions and competitive tournaments around the annual All-Star Game. Today his top priority is leading Breaking Barriers: In Sports, In Life, a program developed by Scholastic Inc. and Jackie Robinson’s daughter, Sharon. Each year, more than 16,000 youngsters in grades four to nine submit essays about how they have used one or more of Jackie Robinson’s principles to overcome barriers in their lives. The top winners are feted at the All-Star Game and World Series, where they are introduced on the field and meet with players and the commissioner of baseball. Some winners have welcomed players to assemblies at their schools, a sure path to instant popularity.

Moss remembers two winners in particular. One is a girl who wrote about overcoming fat-shaming; she was honored at Dodger Stadium on Jackie Robinson Day. The other is a boy who wrote about developing a stutter after sitting in a car with his parents when his father shot his mother (she survived), then killed himself. That youngster was flown to Houston to meet Astros outfielder George Springer, who also
has a stutter.

“You can’t put a price on what it means to kids who are into baseball to participate in something like this,” Moss says. “The entire program is focused on character development, on helping young people take one more step forward by sharing their stories with others who need help.”

Seems like the troubled social worker with a degree in anthropology and sociology found a way to help troubled youth after all.

Moss’ journey to becoming manager of community affairs at MLB was more circuitous than the direct line the “D” train traveled from his boyhood apartment to Yankee Stadium. It’s almost like he ran from first base sideways to third, and then back to second, before finally making it home.

Simsbury High School was one of those progressive zigzags and a huge culture shock. Moss was enrolled there through A Better Chance, a scholarship organization that provides students of color a chance to attend college-prep high schools. In many classes, he was the only black student. The city kid who had been taking the train alone since he was 9 years old was confined by the openness of a small town: one supermarket, one drug store, and the need for an automobile to get just about anywhere.

Two things made it tolerable. The first was living with eight other young men participating in A Better Chance, several of them older, all of them sharing the same experience. Some remain his close friends to this day. And the second was a new sport, football.

After his first day of intense conditioning with the high school football team—no pads, no helmets, no hitting, just you and as much ground as you could cover in the next two hours—Moss admits thinking, “‘I’m never going to walk on this field again.’ I don’t know how I got out there the second day. But when we finally put on the pads, that’s when it became fun for me.”

He was one of only three sophomores to be a starter on the varsity team. He was making his friends, beyond the relationships with students in A Better Chance. The only child of a single mother, he “loved having brothers for the first time,” Moss says. “I just loved never being bored.”

Moss’ high school career was strong enough to attract interest from several colleges that play NCAA Division III football. Division I Lafayette came calling after one of the Leopards coaches, John Strollo, received a videotape of Moss’ play in the mail. The whole thing was another of those “sideways” moments in Moss’ life. One of his high school coaches had a brother who played for Strollo at University of Massachusetts, which is why the coach sent the tape to Strollo at Lafayette. 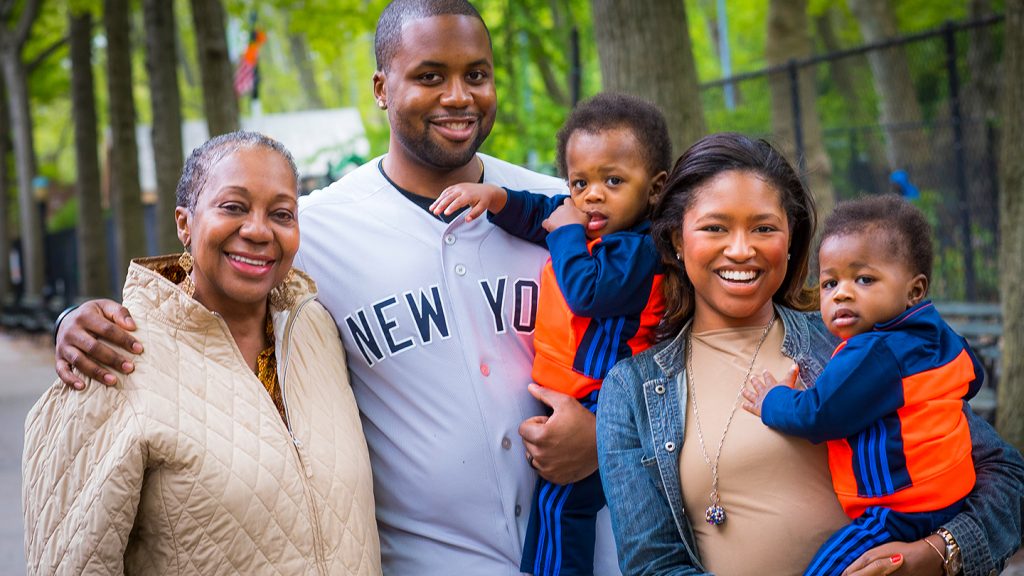 Kevin Moss with his mother, Marianne Moss; son Charles; wife, Rasheena; and son Will at Jackie Robinson Field in Harlem where he played baseball as a child.

“Lafayette was definitely the team that came after me the hardest,” Moss says. “Coach Strollo came to Connecticut to see me. He pulled me aside at wrestling practice to measure me up. He said, ‘I want to make sure your size is what they say you are.’”

Lafayette was the only campus Moss visited. “Mom really wanted me to visit Georgetown to check it out, but I could take a bus from Port Authority to Easton. I didn’t have a car, but I knew how I could get home.” Once he got to Lafayette, Moss learned that one of his new coaches grew up in the same building in Brooklyn as his aunt.

The culture shock of Simsbury minimized, but did not eliminate, the adjustment to Lafayette, where once again Moss was one of relatively few black students. But his teammates became his newest brothers, and one roommate, Tyreese Barnes ’04, grew close enough to Moss that he is godfather to one of his sons. As for Division I college football: “It was tough. The coaches are on you all the time,” he remembers. “You’re spending at least half of your time being an athlete. Other guys who are not playing sports are having the best time of their lives. I’m out running, and they’re just coming home from a party.”

The discipline paid off. At Lafayette, Moss—number 76—started all four years at offensive tackle. He was a three-time All-Patriot League selection and twice earned Football Gazette All-America Honorable Mention.

Moss works as a college football official in the Division III Centennial Conference in addition to his day job, but baseball is the sport that “is close to my heart. The game was special to me growing up, and I want it to do well. I’ll argue with anyone who says something bad about baseball.”

Asked about the abomination that is the designated hitter, the replacement of organ music with a sonic assault on the senses, or the growing idea that to speed up the game, intentional walks should be awarded without having the pitcher actually throw four pitches outside the strike zone, Moss adopts the demeanor of an ambassador.

If you want younger fans, you have to grab their attention. Adapt or lose out.

As for his future, Moss hopes to move up the ladder by learning as much as he can about the many business aspects of the sport.  “I don’t know about becoming commissioner,” he says, “but it would be nice to get a little closer!”

Moss and his wife, Rasheena, have twin boys, Charles and Will, who turned 1 in February. When the boys were barely 4 months old, Mom and Dad took them to their first Major League game. The Minnesota Twins were in town, and a team executive there had sent the couple two onesies adorned with the Twins logo. Get it? Twins-Yankees. Twin boys. The perfect photo opp.