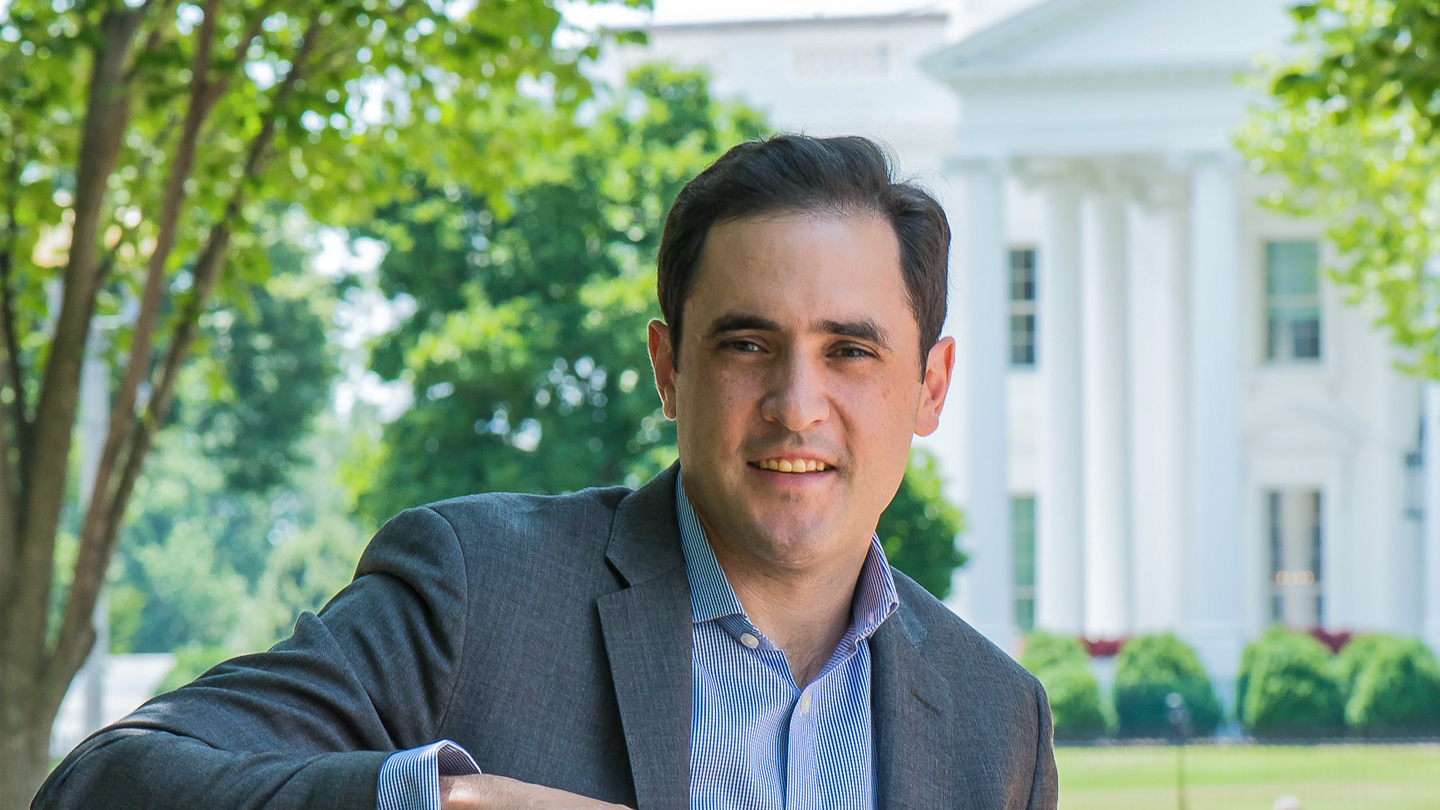 Michael Schmidt’s first job after graduating in 2005 was as a clerk on the Foreign Desk at The New York Times, where he made photocopies, answered calls, and got coffee for reporters.

Today, Schmidt is a full-time reporter at the Times assigned to covering possible links between President Donald Trump and his associates and Russian operatives. And the only thing he’s serving these days is front-page scoops like the one about fired FBI Director James Comey, who wrote in a memo that Trump asked him in a private meeting to take a loyalty oath and end an investigation into former National Security Adviser Michael Flynn.

The landmark story has been dominating the news cycle, and Schmidt, who is also an MSNBC contributor, is making the rounds as a guest on television and radio news shows—Morning Joe, Charlie Rose, NPR, and others. But before Comey, there was Clinton and Bill O’Reilly. That’s right, he’s the same guy who broke the story about Hillary’s private email server, and with another colleague wrote the story earlier this year that led to Bill O’Reilly being fired by Fox News. He’s also exposed players’ steroid use in baseball and discovered classified military documents in a junkyard in Baghdad while working there as a foreign correspondent.

The Times may have given him a national platform, but he got his real start as an ace reporter at Lafayette, where he started a news publication called Marooned. Like tea leaves heralding his future as an investigative journalist, cover lines of the first issue read: “Exclusive 1st Interview. Marooned Goes Head to Head with Daniel Weiss, Lafayette’s Next President,” and “Goldfarb Legacy in Limbo: The Naked Truth Exposed.”

Schmidt recently took a break from covering the Comey story to talk with his alma mater about his rise as a reporting superstar and why it’s important to listen to your gut.

How did you get your start in journalism?

I started working at the Times in July 2005 as a clerk on the Foreign Desk right after I graduated from Lafayette College. I had really wanted to be a television producer but couldn’t immediately find a job at a network.

What does a clerk do?

Answers the phone, makes photocopies, gets coffee. It was the height of the war in Iraq, and my biggest job at that point was getting correspondents in Iraq—where the cellphones didn’t really work well—on the phone for editors. When they hired me as a clerk, they said, “We’ll never hire you to be a reporter at the Times. You can go work at another newspaper and apply as a reporter, and we’ll then take a look at you.” At that point a switch went off in my head, and I really wanted to become a reporter at the Times.

How did you get off the clerk desk?

I started going out on murders and street crime for the Metro section. They would put me in some nasty neighborhoods in the wee hours of the morning. Then one day toward the end of the summer, the sports section needed someone to go to Yankee Stadium to do Steinbrenner duty. My job was to go to the stadium and then at the end of the game stand outside and get a quote from George Steinbrenner, the Yankee owner, as he was getting into his town car. Sometimes he would pop off, and we needed someone to be there to play defense.

That was my start in sports, and I started doing more and more, and by the following year they said, “Go and cover off-the-field legal issues in sports.” Most sports reporters don’t want to cover that stuff, and the editors said, “Let’s see if you can do this, and maybe we’ll hire you full time.” My big break came covering the Michael Vick story. He pled guilty to dog fighting. I found his dogs and wrote about what had happened to them. I still think the only reason they let me cover the Vick case was to save on hotels because it all went down in Richmond, Virginia, where I’m from, and I stayed at home.

I was made a staff reporter in December 2007; two weeks later the Mitchell Report was released. Then Roger Clemens went after his trainer, who accused him of using steroids, and it became a big story, and I was off and running.

Covering bad behavior in sports was a great beat. Sports is filled with a lot of bad behavior, and unlike Washington, there’s not a lot of oversight. It made for great stories. The Times gave me the freedom and resources to pursue the stories. I learned a lot about how to deal with contentious organizations, deal with sensitive secret information, and cover a federal investigation.

My biggest stories came when I wrote about players—like David Ortiz and Sammy Sosa—testing positive for performance-enhancing drugs.

Are you still a Yankees fan?

It’s hard sometimes to be a fan anymore.

Was there blowback from readers?

If you’re writing about things that are inflammatory and embarrassing, people don’t like that. I learned that early on. I didn’t make many friends that way, but it’s not about making friends.

When did you go to Iraq?

I was in sports until 2010, and then in 2011 I went to Iraq for a year. I left in January of 2011 for a survival training course and then arrived in Iraq a few weeks later. Iraq was a unique experience.

War can be incredibly adrenaline inducing and also boring. There’s a lot of sitting around and waiting with very short, intense moments in between.

The way we lived there was incredibly unique. The Times had a big footprint. We had dozens and dozens of employees and a small militia that controlled the city. We lived behind blast walls. We had Iraqi reporters, a gardener, and housekeepers. You could only go out for an hour at a time, couldn’t go out for dinner. I got really good at pingpong, chess, and writing faster.

Tell me about finding the classified documents.

I had learned from my sports days that if you can, find stuff that’s been discarded or thrown in the trash. We were heading out to a junkyard to look at some things the U.S. military was throwing out before they were finally leaving Iraq. We got lost and I was like, “Let’s go back.” But our Iraqi staff insisted we keep going. We walked through the junkyard, and there really wasn’t much there but some old trailers from military bases. But as I was leaving, I walked past a fire pit and looked down and saw these documents that were marked classified. The Iraqis were using the documents for their fire to smoke their fish. There were a lot of documents that were burned before I found those. I can only imagine what stories I missed.

How did you get into covering politics?

I was sent to Washington after Iraq. Starting in March 2012, I covered the FBI and the Department of Homeland Security for four years, and then in 2016 I covered the Pentagon. Now in 2017, I’m part of an investigative group that is focusing on the Russia inquiries.

You’ve broken several high-profile stories. What do you chalk that up to?

You’d rather be lucky than good.

One of those scoops was the Comey story. What information are you still trying to get?

We’re still trying to figure out where this story is going and how far into it we are. We could be in the second inning or the seventh. We just don’t know yet.

What’s it like being the media man of the hour?

I don’t know if I’m the media man of the hour. It can be an interesting mix of excitement, frustration, and exhaustion. The best part is after I have a long day and my mother calls me and says that I looked tired on TV that night.

What do you do when you’re not breaking front-page stories?

Get up at 5 a.m. every day and go to Starbucks and start reading and working.

How has the media landscape changed under Trump?

We’re going through like two or three news cycles in one day. The level of interest is higher, the stakes are higher, the political flames are hotter, and competition fiercer.

What are the challenges in a world where people believe news is fake?

Trying to get the public to understand that we’re just about following the facts without fear or favor. I don’t vote, I’m not a partisan, and we don’t care whose ox is gored.

Has your gut ever failed you?

My gut says a lot. We’re on a high wire here, and we can’t make a mistake, and we’re often dealing with complex pieces of information that either no one wants to talk about or is under seal or classified. The combination of that can be incredibly demanding and tough, and when you’re faced with that on a constant basis, your gut tells you a lot of different things.

Did you always want to be a journalist?

I would have died and gone to heaven if you told me the day I graduated that I was going to be an NBC page. I wanted to be a production assistant. I couldn’t get hired. I took the first semester of senior year and worked at The Boston Globe. I thought my time in newspapers was over. I enjoyed it, but I saw how hard and stressful print journalism was.

Did you write for The Lafayette?

Yes, as a first-year. Then, along with my classmate Erin Koen, we started our own publication, Marooned, which the school funded. It was an incredibly powerful way for me to experiment and learn about journalism. It contained a mixture of satire, hard news, and interviews. It was quite fun.

How did Lafayette prepare you for this career?

Professor Bruce Murphy encouraged my curiosity about how the world functions and how politics operate, and fostered helpful and insightful lessons to understand the strength and functionality of a democracy.

Do you have a mentor or idol?