Joel Cesare '04 is paving the way for a more sustainable planet.

In 1848, more than 300,000 people from around the world boarded boats and wagons and headed to California lured by news of the Gold Rush. If Joel Cesare ’04 has his way, the modern-day Golden State will be ground zero for the green rush.

Rather than riches, Cesare believes there’s something even more valuable to be mined—the future—and he’s doing his part to preserve it. Not only as sustainable building adviser for Santa Monica, but as founder of an online company that combines conservation with fostering a love of nature in at-risk teens through action sports.

Cesare might not be searching for the glittering dust of an 1840s Argonaut, but he seeks pay dirt of the altruistic kind; environmentalism has become more than jingoism or even a career with the 35-year-old entrepreneur. It’s a calling.

Instead of a prospector’s pick and sluice box, Cesare employs compost toilets, solar panels, and space-age technology that harvests water from ocean fog in his role with Santa Monica, a city that takes green building seriously. Want proof? Every new structure in the city is required to be net-zero energy, meaning it produces as much energy from renewable sources as it consumes. The city also boasts the world’s only solar-powered Ferris wheel.

But the $60 million project Cesare is overseeing is beyond green. It’s Mother Nature on herbal steroids. If all goes as planned, the 50,000-square-foot city services facility will be the most self-sustaining building in California’s history.

Plans call for the three-story structure, located behind the 1938 City Hall, to meet requirements of International Living Future Institute’s Living Building Challenge, the most rigorous environmental building standard in the world. Only 15 buildings on the planet meet it. Santa Monica’s facility would be the largest and first municipal one to do so.

Typical green buildings are just “less bad” for the environment than conventional ones, Cesare explains, but Living Buildings are designed to be “ecologically restorative.” To qualify as such, they must generate all of their own power and meet their water demands from captured precipitation treated without chemicals.

“Living Buildings are based on the metaphor of a flower,” says Cesare, who credits Lafayette for opening his eyes to environmental challenges and the importance of addressing them head on. “A flower can’t get resources from other places. It harvests energy from the sun, water from rain or its roots, processes all its own waste, and maintains a symbiotic relationship with its neighbors.”

When I visited Cesare at his office in Santa Monica last summer, he unfurled rolls of blueprints outlining the project. The building will feature waterless or composting toilets that use an aerobic process to treat waste. “A lot of state parks have buildings with composting toilets, but this is taking the technology to a more sophisticated level,” he says. “Instead of our toilets flushing water every time we use them, we are now creating a resource by going to the bathroom. We’ll allow natural processes to treat biosolids—we’re getting into toilet talk here—to a level where they’re commercially viable compost. We’ll be selling human-derived waste to farmers for crop production.” 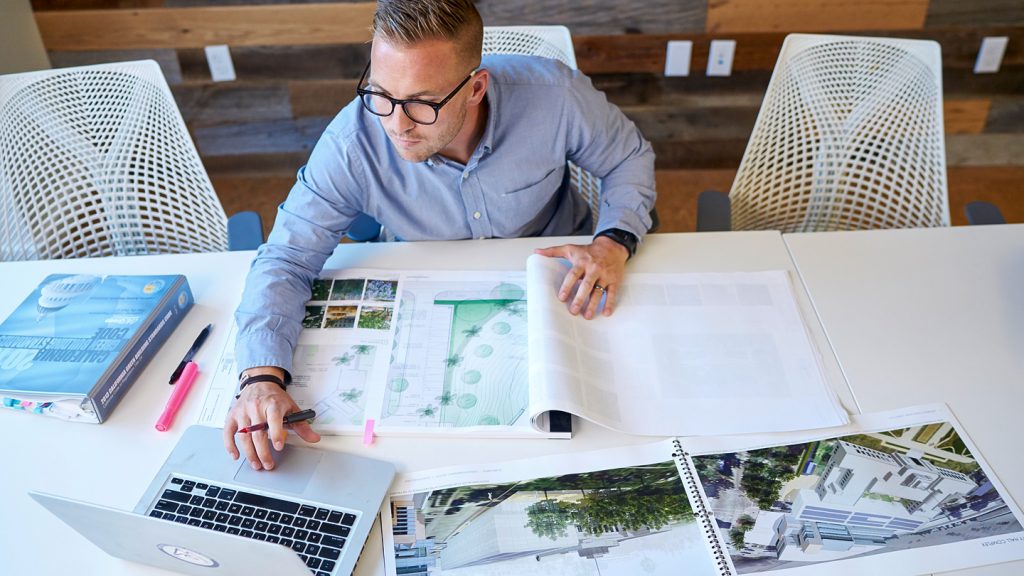 “Like The Martian,” I exclaim, referencing the 2015 sci-fi flick about an astronaut who gets stranded on Mars and ends up growing potatoes in a makeshift greenhouse fertilized by excrement left behind by the rest of his crew.

“Yes, exactly!” he says. “It’s amazing you said that because with the Living Building Challenge, you have to think of your building like a spaceship or a cruise liner or a military outpost. That’s where the technology is coming from. It’s not that crazy because NASA and cruise ships have been utilizing these technologies for decades, and we can bring these concepts to the building level.”

In keeping with the bathroom theme, the project is investigating extracting phosphorus and nitrogen—important nutrients in farming—from urine. “This is the paradigm shift. Thinking of buildings as resource producers, not resource consumers,” says Cesare.

Additionally, 100 percent of the project’s landscaped area will be edible agriculture.

“It’s going to smell like you’re walking into a botanical garden,” he says of the proposed courtyard. “It’s going to have rosemary and pineapple guava. There’s going to be hummingbirds. We can enhance ecosystems while providing sustenance for the community.”

One of the biggest challenges for the project will be net-zero water, and not only because of Southern California’s long-time drought. Plans call for collecting rainwater off the roof as a source of drinking water, a method Cesare describes as “highly complicated” because the state’s Division of Drinking Water has rigorous requirements overseeing the safety of potable water. But that’s not stopping Cesare and his engineering team from researching innovative ways to achieve net-zero water. One option is designing a system that uses atmospheric water generation to extract H2O from humid ambient air.

“Yep, back to The Martian,” says Cesare, who over the last three years has spoken at major sustainability conferences around the world on harvesting water for reuse.

Regulators are supportive of the project, Cesare says, but multiple systems proposed to meet the Living Building Challenge have never been permitted before in California, including collection, treatment, and reuse of rainwater for drinking.

Cesare has one thing working in his favor. He was recently named project director of the city services building, which gives him the authority to make sure contractors follow sustainability initiatives outlined in the plans. This includes a system that reduces the need for air conditioning by monitoring ocean breezes and then opening and closing office windows to maximize fresh air circulation.

“Usually sustainability is one of those items up for negotiation” with privately financed projects, Cesare says. “But now that I’m in charge, it’s not on the table. Just because something is hard is not a reason to avoid the challenge.”

The Greening of a Leopard

At Lafayette, Cesare, a government and law major, had never heard of climate change until he enrolled in Prof. Dru Germanoski’s Geology 101 course to fulfill a lab requirement.

“I remember thinking, ‘How are more people not talking about this?’” says Cesare, who had aspirations of law school at the time.

Energized by what he was learning in class, he picked up a second major in geology as a junior. The next year, he did an externship with Joe Heaney ’84, founder and president of Walden Environmental Engineering in Long Island. An environmental consulting firm, Walden focuses on contaminated soil and groundwater remediation for municipal and industrial clients.

Sounds like a perfect place for Cesare to learn the trade, and it was, leading to a full-time job at Walden after graduation. Cesare admits part of the motivation drawing him to Walden was to pursue Long Island native Lauren Ricca ’04, now his wife. Cesare worked there as a project hydrologist for a year before moving to California. It wasn’t for a better job, but a better life. He wanted to surf, and Ricca, who had her own dreams of a career in fashion, decided to move to Manhattan where she landed a job with Ralph Lauren as an assistant account executive.

What happened next is the stuff of a male buddy movie. Cesare, Pat Brown ’04, and Ryan Moloney ’04 decided to drive across country in a cramped black Mitsubishi without a plan—no jobs let alone a place to stay. “I guess we were young and dumb but confident in our abilities,” says Cesare.

Cesare kept his lessons from Germanoski in mind and eventually got hired as an environmental underwriter in the downtown Los Angeles office of AIG, a multinational insurance company.

The company was doing well, and Cesare was living high, but after a few years he realized he wanted a more fulfilling career. “Environmental insurance and environmental consulting are about cleaning up the mess. It’s the reactive side of the business. It dawned on me that I wasn’t helping anyone; I was just allowing big companies to pollute more by providing insurance.”

By now, things had gotten serious between Cesare and Ricca, and Ricca received an offer to advance her career in southern California as West Coast sales manager with Diesel, a denim design company. In his late 20s and jaded by the corporate world, Cesare decided to pursue a master’s degree at the Bren School of Environmental Science & Management at University of California, Santa Barbara.

He graduated in 2012, and after a short stint as a sustainability consultant for a London-based startup, Cesare signed on with Swedish construction company Skanska, which had won a $1 billion contract to extend two Bay Area Rapid Transit stations in San Francisco. As part of the project, the company was required to employ a full-time sustainability expert, but it wasn’t a defined position at Skanska. So it hired Cesare for the job and gave him the title of project engineer.

“A lot of construction companies have a complicated relationship with sustainability,” says Cesare. “My boss, who was the project manager, knew a sustainability expert was needed by the contract, but he didn’t think it would take all my time so he wanted to train me to be a project manager as well.” 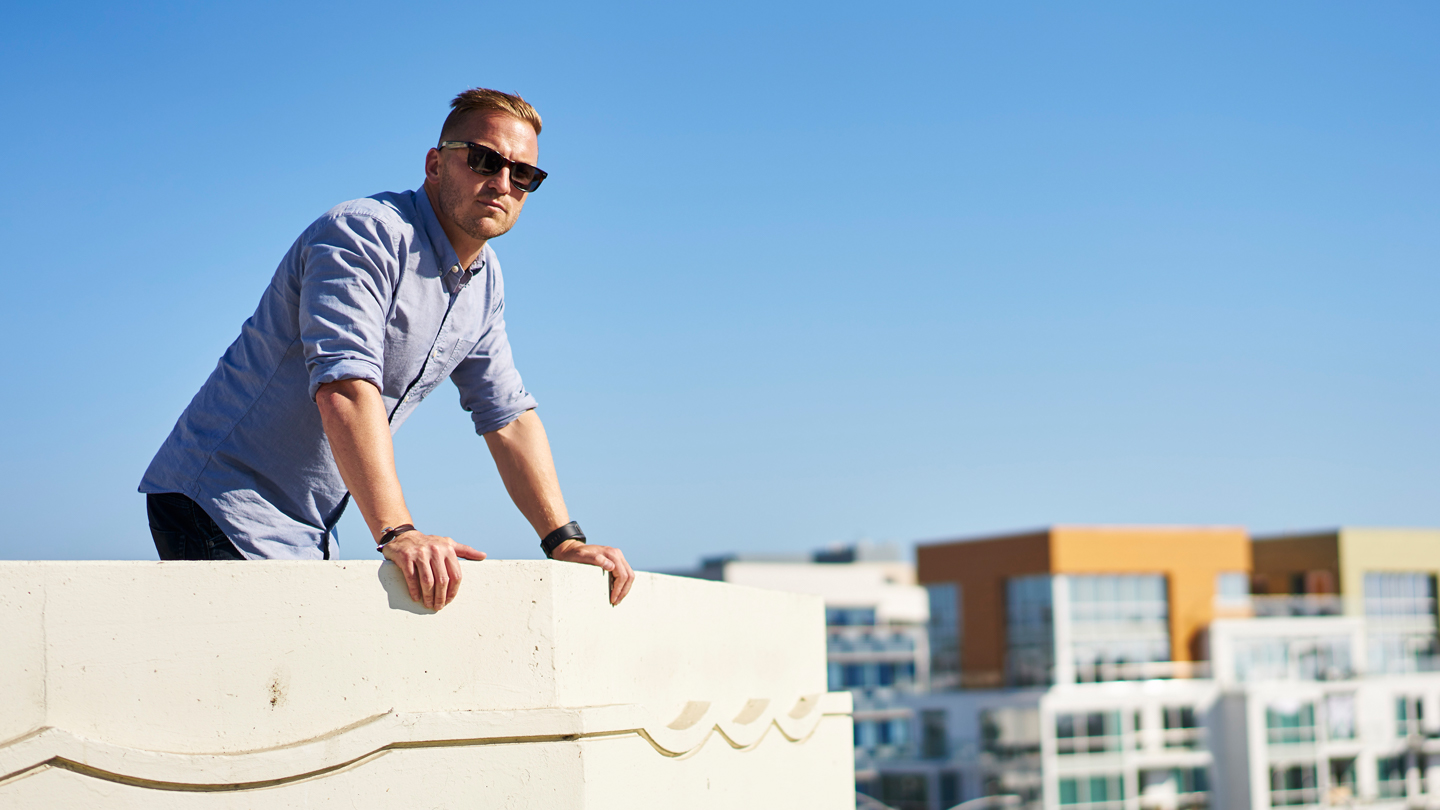 It worked for Cesare, but a year into it Ricca, who specializes in high-end department store coordination of sales, realized that San Francisco wasn’t the right market for her career. The couple made a decision to move to Los Angeles, where they could both get their careers on track in the same place. By all standards it worked. Ricca landed a job as director of sales for North America with Ted Baker, the British luxury clothing retailer, and Cesare was hired as sustainable building adviser for one of the most environmentally conscious cities in the country.

Now Cesare is tackling the kind of next-gen projects that geology students at Lafayette could one day study.

The job hasn’t been without issues. Earlier this year, the city services building project faced objections from community skeptics who bellowed about its price tag—“not appreciating the long-term savings from never having a utility bill,” Cesare adds—and suggested some of its environmental features, including the composting toilets, would actually pose a health threat.

But City Council stood firm in its commitment to the project. With council’s blessing, Cesare is moving forward with hopes of having the building ready to open on the 50th anniversary of Earth Day in 2020.

Cesare understands the concerns people might have when confronted with the stuff of sci-fi movies—a building that produces its own water, heats itself, opens windows to leverage an ocean breeze. But he believes it’s only a matter of time before everyone understands that true sustainability isn’t an ideal but an investment in the future. 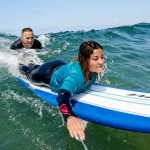 Waist deep in the Pacific Ocean, Joel Cesare ’04 is holding the tail of a surfboard, waiting for the perfect wave to give Jasmine a fighting chance in riding it to shore.