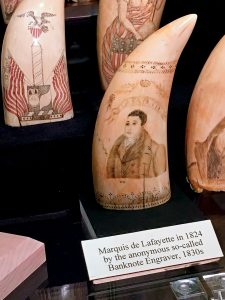 One hundred eighty-three years after his death, the Marquis de Lafayette is engrained in the culture of the nation. Cities, streets, baseball diamonds, and yes, even a certain East Coast college bear his name. During World War I, at the grave of the Marquis, U.S. Army Col. Charles E. Stanton famously yelled, “Lafayette, we are here!” The Marquis has responded thousands of times over—so is he.

Chris Phillips, associate professor of English, was on a trip to the New Bedford (Mass.) Whaling Museum when he glimpsed the Marquis’ visage on a whale tooth. A scrimshaw artist, the anonymous Banknote Engraver, had carved an image of Lafayette as he appeared during his 1824-25 visit to the young nation he’d helped found. The piece was crafted in the 1830s.