Being among the first classes at Lafayette to admit women, Susan Carras ’76 (L-R) and Barb Levy ’77 developed bonds with their female classmates that have lasted four decades.

“We were quite friendly with each other because there were so few of us,” says Carras, who was a first-year student in 1972, two years after Lafayette welcomed its first coeducational class. “We didn’t have sororities or any kind of a gathering club. So we became great friends.” 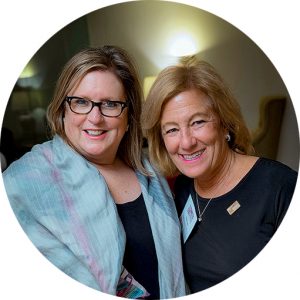 A few years ago, Carras and Levy decided to create the First Women of Lafayette Scholarship as a way to not only help the next generation of Lafayette women, but also provide a purposeful incentive to get together with classmates.

“We didn’t want people to think we were getting together just to collect money, and it has not been that way,” Levy says. “These women are very excited to be a part of this group. It’s a scholarship by women, for women, and it really gives us a way to give back.”

The group’s first event was a dinner in November 2014 in New York City that attracted about 120 people during festivities surrounding the historic 150th Lafayette-Lehigh game, the most-played college football rivalry in the nation.

On March 31 of this year, the group held a reception at the Metropolitan Museum of Art, where former Lafayette President Dan Weiss is now the museum’s president and chief operating officer. Margaret Schiazza ’20 was announced as the first recipient of the scholarship.

“It was a wonderful turnout,” says Carras, who served on Lafayette’s Board of Trustees for about two decades. “People came up to me in tears saying, ‘I’m so glad to see my old friends.’”

Carras and Levy have great memories of their college days. As a history major, Carras worked on her honors thesis with adviser Ellen Hurwitz, a historian who later became president of American University of Central Asia. They stayed in touch and became friends, and Hurwitz was among those attending the reception at the museum.

Levy, who majored in psychology, worked for more than 30 years in executive merchandising positions for Macy’s and Ross stores. A member of the Board of Trustees, she lives in New Jersey and is retired but still does consulting work. She’s the mother of Rachel Hollander ’11 and Alyssa Hollander ’14.

While women were newcomers at Lafayette when Levy and Carras attended, neither recalls facing animosity or discrimination from their male classmates. “We’re such good friends with the guys from our class,” Carras says. “We’re all so supportive of each other through the years.”

The only time Levy remembers facing blatant sexism was when she volunteered to call alumni for donations during the College’s phonathon.

“More than once the male alum on the other end of the phone—because they were all male that I was calling—said, ‘I will give to Lafayette, but I will not give to a woman. So if you want me to give, you hand over the phone to a male,’” Levy recalls, chuckling. “I was like, ‘Are you kidding me?’ Then I’d say, ‘Sure.’”Forty years later, the first women of Lafayette are now calling the shots and making sure the next women of Lafayette have the opportunities they deserve.

As a track and cross country star at Ramsey High School in New Jersey, Margaret Schiazza ’20 was looking for a college where she could run competitively but also one with outstanding academics as a possible springboard to medical school.

Lafayette fit the bill and fit her to a T.

“I felt really comfortable when I came here,” says Schiazza, the inaugural recipient of the First Women of Lafayette Scholarship. “Yes, athletics are important, but academics come first. I felt like I would feel at home,but I was still going to be able to move to the next level; the academics were really going to challenge me.”

Schiazza graduated in the top 5 percent of her high school class and was Bergen County champion in the women’s mile and two-mile races her senior year.

I felt like I would feel at home, but I was still going to be able to move to the next level; the academics were really going to challenge me.

She plans to major in neuroscience and minor in math. After a great start to the fall cross country season, finishing among the College’s top five runners in her first two meets, she was sidelined by a knee injury later in the season.

Schiazza says the scholarship has enabled her to invest energy in academics and athletics without the constant concern about financing her education.

She missed being introduced to scholarship donors during a March 31 reception at the Met because she had a track meet the next morning. But Schiazza looks forward to meeting her benefactors to thank them in person one day.