Two years ago, Liz Atkinson ’18 fell. Her ring caught on something in the South College residence hall, tearing off most of her finger.

Cale Bollman ’17, a mechanical engineering major, heard about the student’s accident. He was taking an English course and wanted to write a podcast about her story. And, as happens so often at Lafayette, a liberal arts course inspired an engineering project.

As mechanical engineering students brainstormed ideas for what their senior capstone should be, Bollman proposed the idea of crafting a new finger for Atkinson.

“There are individual passive prosthetics” for fingers, explains Ben Ritter ’17, who became one of Bollman’s teammates on the project. “But powered prosthetics are hard to find. The ones you do find are either very, very expensive or motorized and loud. So we wanted to find a way to take away those negative sides.”

Bollman sat down with Atkinson at the Skillman Library café and talked about what she’d want in a new finger. By then she’d lived without the digit for a couple years and hardly thought about it anymore. 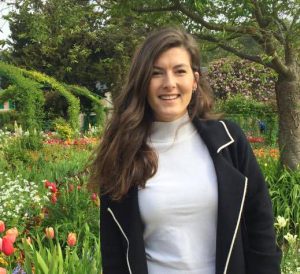 Atkinson has yet to try the prosthetic. “I think the project is incredible,” says the Orinda, Calif., resident. “First, medically it’s amazing; there are no products like this out there, and I think it really is making a big step in the right direction. And second, I feel so lucky to be involved in a community that cares enough about me and my story to actually make an entire project out of it.”

Still, “there were a lot of little things she couldn’t do,” Bollman says. “If she would reach into a jar of Skittles, she couldn’t grab all of them. Or if you’re trying to fill up your hands with water, you really can’t do it because you’re missing that finger, and there’s always a gap. So simple little things that you really wouldn’t think of.”

Five mechanical engineering students joined the team—Bollman, Ritter, Meg Aske ’17, Emma Collins ’17, and Quincy Wu ’18. Julia Wescott ’17, a biology major, also joined in. Early on they were presented with a challenge: Atkinson was headed to Paris for a semester, and she was bringing her hand with her.

The team first tried a plaster cast, but it proved too brittle. Aske, who is minoring in art, poured a rubber material into the cast. That gave the team a rubber version of both of Atkinson’s hands for custom designing the prosthetic finger.

The device is a black glove made of flexible material. “Our goal is something where you just wake up in the morning and put it on as if it were as simple as a hat,” Bollman says. 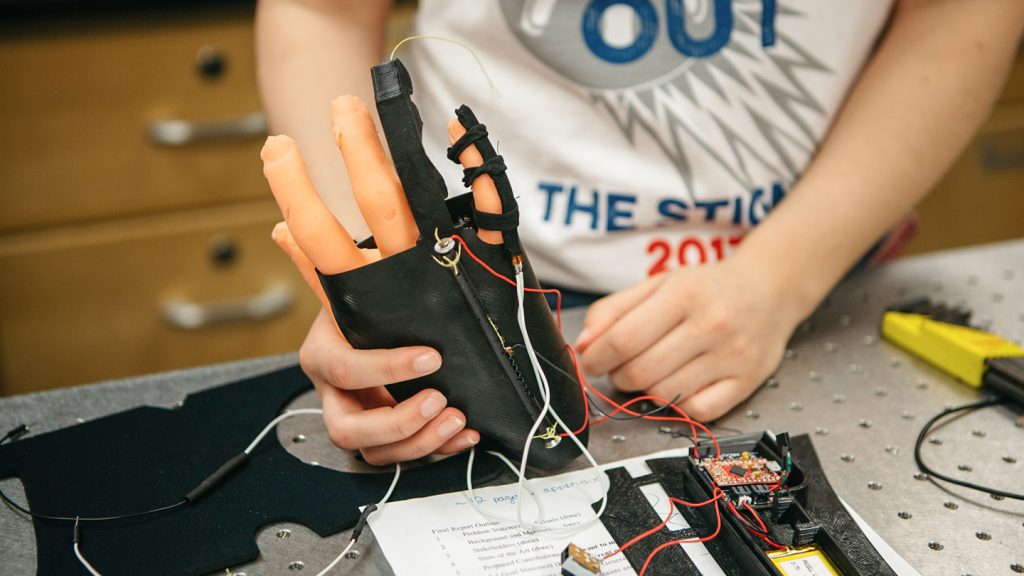 With only about two months to spare, the team discovered that plan wouldn’t work, and a second spring was needed to pull the finger back the other way.

This changed the design. “It was completely different from what we envisioned for the entire first semester of work,” Collins says.

Bollman and Wu worked on the control for the finger, which runs on a small rechargeable battery. A sensor attaches to the pinky finger and detects its movement. So when Atkinson attempts to grasp something and the pinky finger moves, the ring finger will move in tandem.

“In addition to successfully designing a complex shape-memory alloy actuated and instrumented prosthetic, the team did a lot of good work in terms of developing a process for patient-specific prosthetics in the first place,” says Brent Utter, assistant professor of mechanical engineering, who served as the team’s adviser. “And that is of great value…This is truly customized to Liz’s hand. And so the process to get from the actual hand to something that’s custom fit—now that’s a repeatable process.”

X-Trained Engineering
The mechanical engineering senior design course was enhanced through the X-Trained Engineering initiative funded by the Kern Entrepreneurial Engineering Network. Faculty received a stipend to develop experiences that foster thinking beyond the technical challenges of a problem and to consider its humanistic, artistic, economic, and social dimensions.