A central part of Lafayette’s mission is encouraging students “to examine the traditions of their own culture and those of others.” That explains why international affairs has been a major for six decades, why 60% of students study abroad, and why 10% of students come from other nations (with half of those international students receiving financial aid grants from the College).

In addition, Lafayette is a national leader in study abroad experiences for engineering students. Two-thirds study abroad, and for one-third, that experience stretches across a full semester or entire academic year.

“Lafayette produces globally relevant leaders,” says Angelika von Wahl, associate professor and chair of international affairs. ”By challenging students to think more broadly, we encode the empathy, vision, and grit they will need to make a substantive difference in the world.”

Live Connected, Lead Change deepened this strength in many ways—most prominently, perhaps, through construction of Oechsle Center for Global Education. 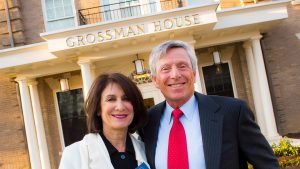 For example, at Grossman House for Global Perspectives, named in honor of the late Trustee Emeritus Richard A. Grossman ’64 P’97 and Rissa W. Grossman P’97, two dozen academically adventurous students work with faculty advisers to design their own programming that explores the implications of globalization and multiculturalism. The former fraternity house, originally constructed in 1915, received national recognition for its state-of-the-art, sustainable renovation, funded thanks to a lead gift from the Grossmans, garnering LEED-CI Gold certification from U.S. Green Building Council. 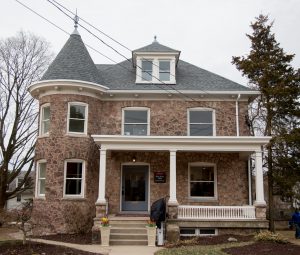 The Max Kade Haus for German Studies and Visiting Scholars, located on McCartney Street, was dedicated in 2018. The renovation was made possible through the Max Kade Foundation, Inc.

Thanks to the Max Kade Foundation, an advocate for the study of German language and culture, a new Max Kade Haus for German Studies and Visiting Scholars at 606 McCartney St. bolsters the German program—one of the College’s oldest—and provides space for visiting scholars to stay near campus. The Max Kade Haus joins the Max Kade Center in Pardee Hall, which provides classroom and meeting space for the German program. Some 50 Lafayette students—the majority engineers—each year take advantage of study in Germany and Austria, including faculty-led programs in Berlin, Bonn, Bremen, Freiburg, and Vienna.

Each summer, two Lafayette students receive the life-changing opportunity to live in Venice and intern with world-renowned art restoration organization Save Venice, thanks to the Mary ’79 and Howard Frank Internship Endowment. “Very few people can say they had the opportunity to travel and actually see what they have been studying in the classroom,” says Erica Kamin ’11, who participated in the program during its inaugural year. “It was the most incredible summer of my life.” 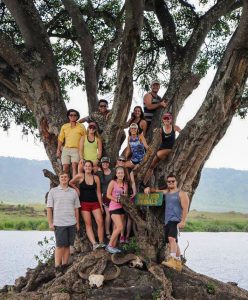 Aliza Furneaux ’17 and classmates are pictured in Tanzania in 2017. Her interim trip was made possible by the Marina C. Peterson ’10 Study Abroad Fund.

Although she studied environmental sustainability throughout her four years at Lafayette, Aliza Furneaux ’17 learned an important lesson firsthand during a January interim course in Tanzania: “You can have great technology, but it will crash and burn without knowledge of the culture. You can’t have a blanket approach. Each community is different.” The experience, made possible by the Marina C. Peterson ’10 Study Abroad Scholarship, helped Furneaux narrow her research focus as a graduate student post-Lafayette.

Two lecture series bring to campus speakers of tremendous insight: The annual Robert ’69 and Margaret Pastor Lecture Series began in 2013 by hosting a lecture on human rights and democracy by former President Jimmy Carter. The Class of 1961 Lecture Series just this year welcomed Ellen Johnson Sirleaf, a Nobel Peace Prize laureate and former president of Liberia. In the fall, international affairs will welcome CNN host Fareed Zakaria to campus, another highlight of the anniversary celebration.

The new Rado Pribic Prize named for the professor emeritus of German and Russian language    honors students who have excelled in the study of international affairs, and a newly created International Affairs Hatfield Award for Global Scholarship is being created by John Hatfield ’67. Gifts raised during the campaign will in future years create two new faculty positions focused on international affairs.