1965 was a year of war and protests, sit-ins, and marches, a time of divisive tumult and moral reckoning. As American combat troops headed to Vietnam for the first time, Martin Luther King Jr. led civil rights marchers to Selma, and the Watts riots raged. 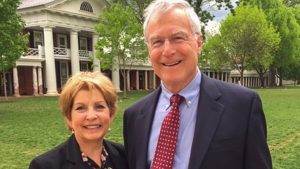 Against this backdrop, the Higher Education Act was established, increasing federal money to colleges and universities, creating scholarships, and providing low-interest loans to students.

The program came too late for Lafayette’s Class of 1965, although many of its roughly 350 members had received financial aid from the College and understood its significance in their ability to attend the institution.

So when it came time a few years ago to mark its 50th anniversary, the Class of 1965 agreed that the best way to honor the education members had received and the many lifetime friendships formed during their years on the Hill was to provide an endowed scholarship for future generations.

“It was something everyone could be a part of, and it would always be there,” says Howard Heller ’65, a manufacturers’ representative from New Jersey and class fund manager of the Class of 1965. “We had really good participation.”

The scholarship was first awarded in 2016 and is one of 13 endowed scholarships established by individual classes. This school year’s recipient of the 1965 gift is Alaina Ciccone ’19, a double major in mathematics-economics and government & law.

“I wouldn’t have been able to afford Lafayette without it,” says Ciccone of Long Island, N.Y., who hopes to find a job in consulting or the data analysis field. “It granted me the opportunity to come to such a prestigious school, gain a great education, and meet so many amazing people. I’m truly grateful.”

Heller, who majored in government and law, says he can recommend establishing a scholarship to other classes, especially during a reunion year.

“It’s a good way to give something back to the College as a group,” he says. “It’s a feel-good thing, but it’s also a very worthwhile effort.”