A Grammy Award-winning American composer stands at the chancel of a church in downtown Easton. She is flanked on one side by a young tenor vocalist from Ireland and a combined 75-voice community and college chorale, and on the other side by a 30-piece orchestra.

Together they will present a program in three parts, including the world premiere of a Lafayette-commissioned major work. The composer’s composition and residency received principal funding from the Hearst Foundation and the Andrew W. Mellon Foundation, with additional contributions from the Pennsylvania Council on the Arts and the Lafayette Alumni Chorus. The Northampton County Historical & Genealogical Society and Delaware and Lehigh National Heritage Corridor were among other campus partners. 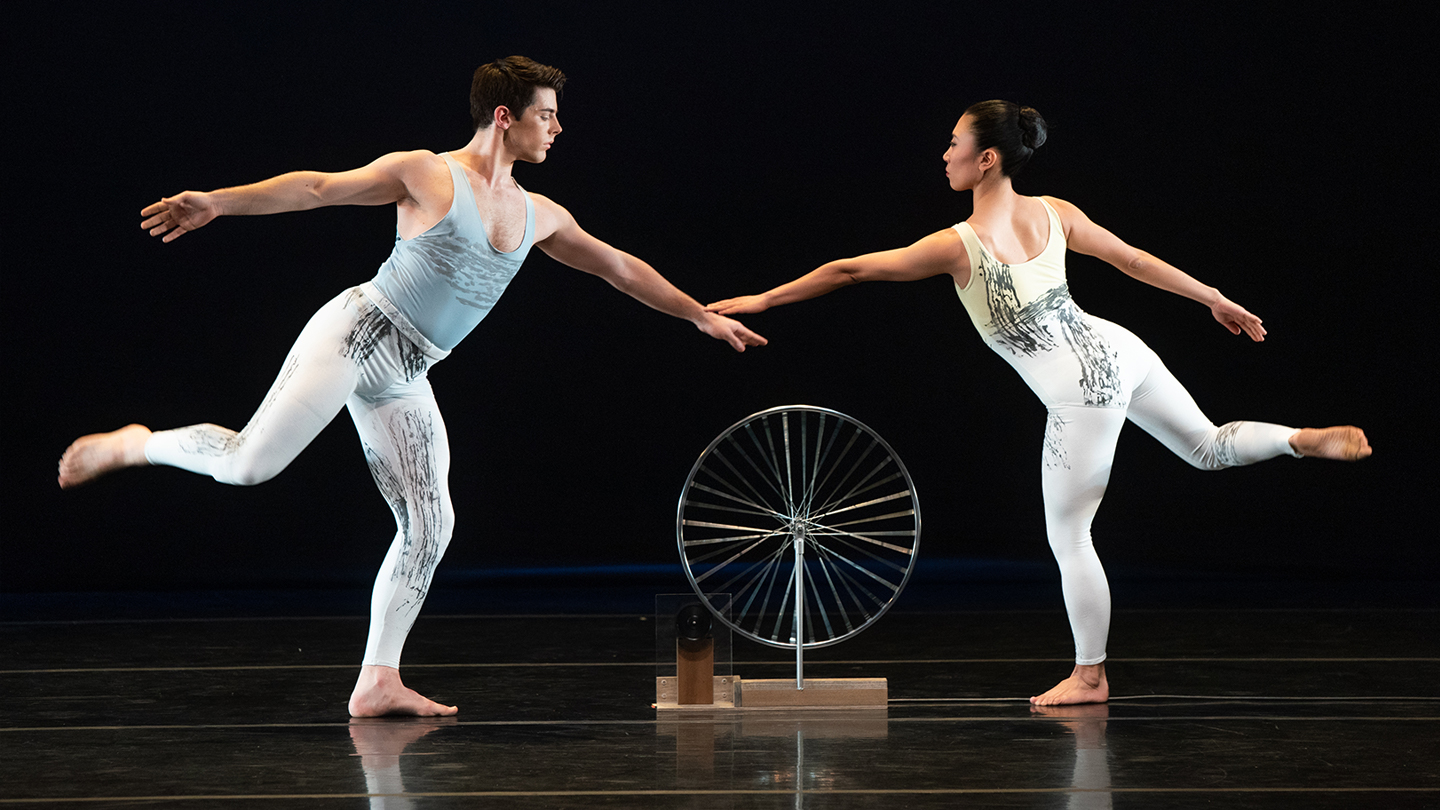 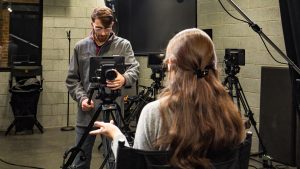 Getting to this place began over a decade ago with an idea and initial support. The idea harnessed the College’s Cur Non spirit: to integrate further the performing, written, and visual arts throughout the curriculum and in co-curricular activities; to create new opportunities in the arts and enhance existing ones; and to strengthen the College’s connections with artists, arts communities, and diverse audiences.

Recognizing the College’s established distinction and ambitious vision of infusing the arts throughout the curriculum, the Mellon Foundation stepped up with $2.2 million in three grants to Lafayette that extended the reach of the arts and humanities both on campus and in partnership with the city of Easton as a creative community and as an arts destination.

Altogether, Lafayette attracted more than $5 million in grant funding to the arts during the campaign, an exceptional achievement for a small college according to Maurice Luker, executive director of corporate, foundation, and government relations. The National Endowment for the Arts (NEA) awarded the College and the city of Easton a $200,000 grant to host a pioneering arts event focused on a dozen commissioned works of sculpture and a series of free community performances as part of the Mayors’ Institute on City Design, in anticipation of building the Williams Arts Campus and Karl Stirner Arts Trail. Of 21 NEA award recipients, Lafayette was the only college or university nationwide to receive this special recognition. 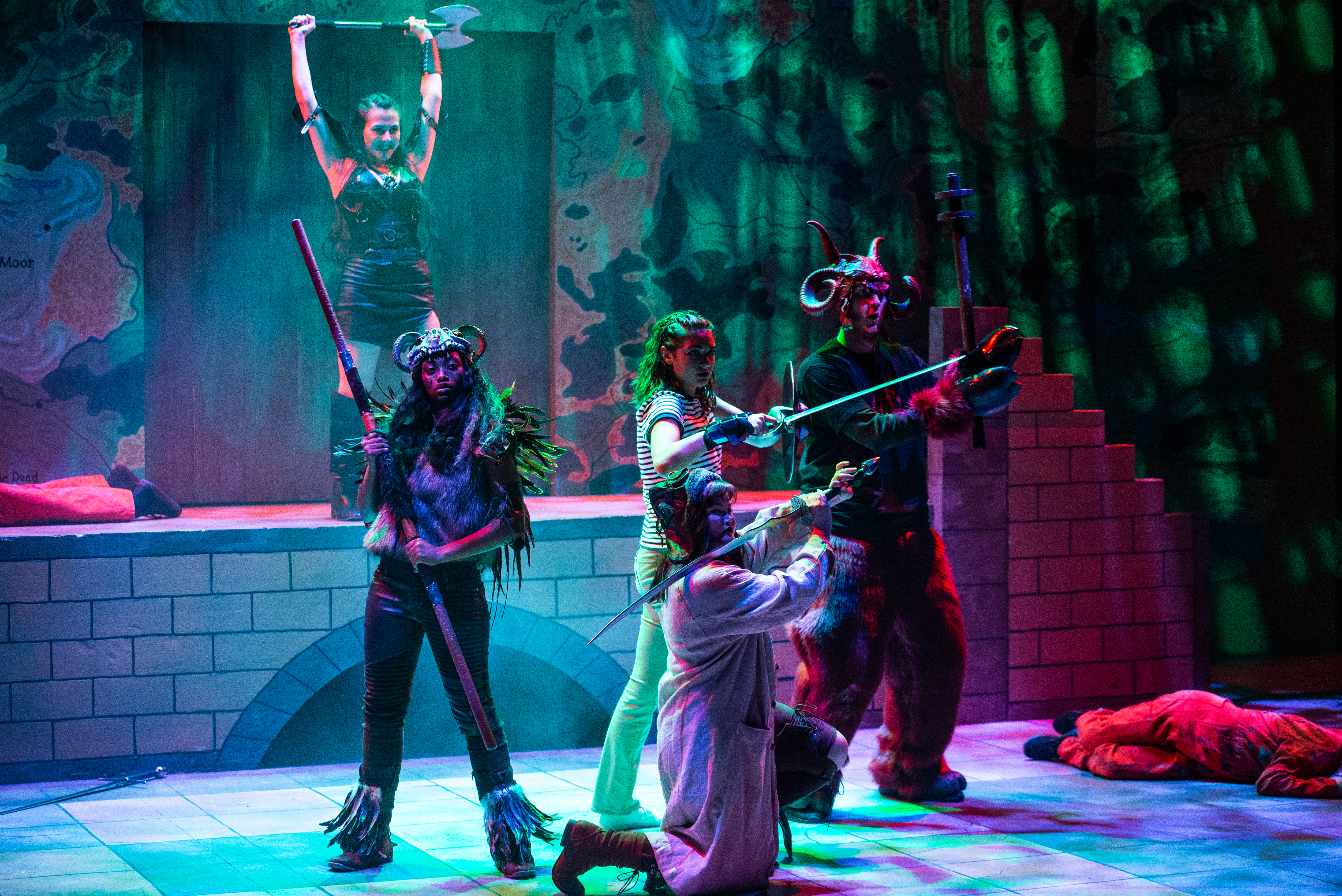 In making the case to the Mellon Foundation, former President Dan Weiss summarized Lafayette’s approach to the arts: “We believe our students’ involvement in the artistic process—in the classroom, studio, rehearsal room, concert hall, media laboratory, and many other settings—is fundamental to the goals of liberal education. It inspires the mind, helps develop critical skills, and leads to an understanding of the myriad ways in which art serves as a vehicle for modeling human experience.” 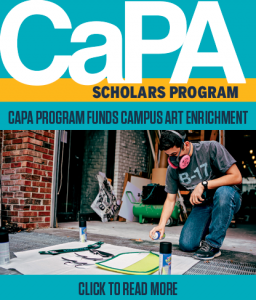 To make this happen the College committed to hiring a new faculty-level position of director of the arts, a position first held by Suzanne Westfall, professor of English and theater, and then by Jennifer Kelly, associate professor of music.

“We have five robust department and academic programs including visual art, theater, music, film and media studies, and creative writing,” says Kelly. “Couple those with thriving galleries, a notable performance series, a community arts program, and a creative and performing arts scholars program. The arts here are innovative, bold, and vibrant.”

“All this while still cultivating students of art who can sit first chair in one of 10 ensembles, have the lead in a play, produce a creative writing magazine, collaborate with renowned visual artists, film their own documentary, or solo in a concert regardless of their majors,” adds Kelly. 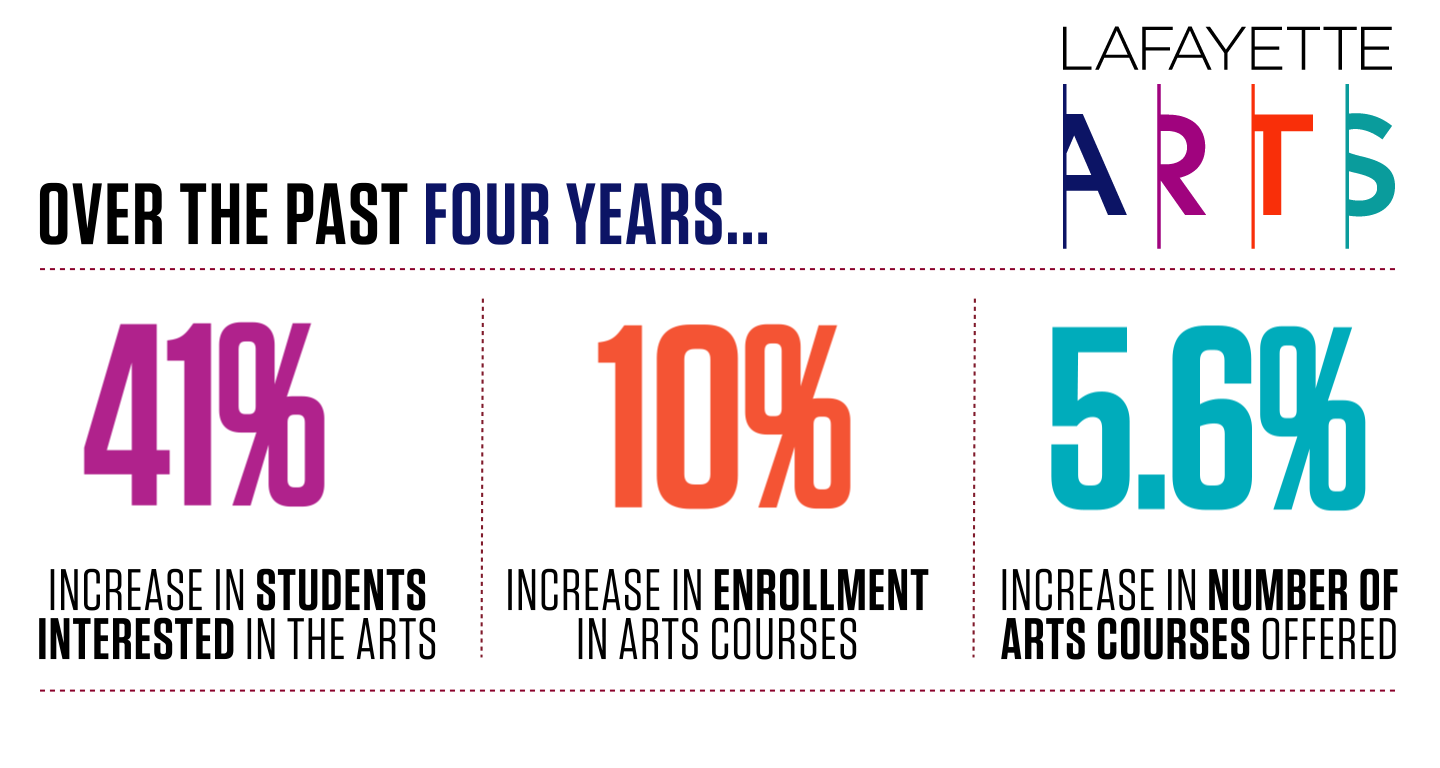 “When we started talking about how we could better support the arts on campus, we decided that our goal should be to make it impossible for a student to attend Lafayette and not have significant encounters and experience with the artistic and creative process,” says Mary Roth ’83,  Simon Cameron Long Professor of Civil and Environmental Engineering and former associate provost. “Whether it be in the classroom, studio, practice room, media laboratory, dorm, on stage, on the Quad, or some other campus location, involvement with the arts inspires the imagination, develops critical thinking skills, and provides valuable insight into the human experience. It was also important that these student experiences not be restricted to disciplines traditionally associated with the arts but would involve and connect the full range of disciplines at the College and support interdisciplinary conversations about important social, cultural, and scientific questions.”

It helps that the footprint of arts facilities has expanded by some 50 percent with the growth of Williams Arts Campus, made possible by a $10 million lead gift from the Morris R. Williams 1922 family. Joining the Williams Visual Arts Building as the gateway to campus from downtown Easton, Ahart Family Arts Plaza opened in 2010, and 248 North Third Street became the home to the College’s newly established film and media studies program and theater department in 2014. Finally, in 2016, the College dedicated William C. Buck Hall, which houses the Daniel and Sandra Weiss Theater and the John W. ’39 and Muriel T. S. Landis Cinema. 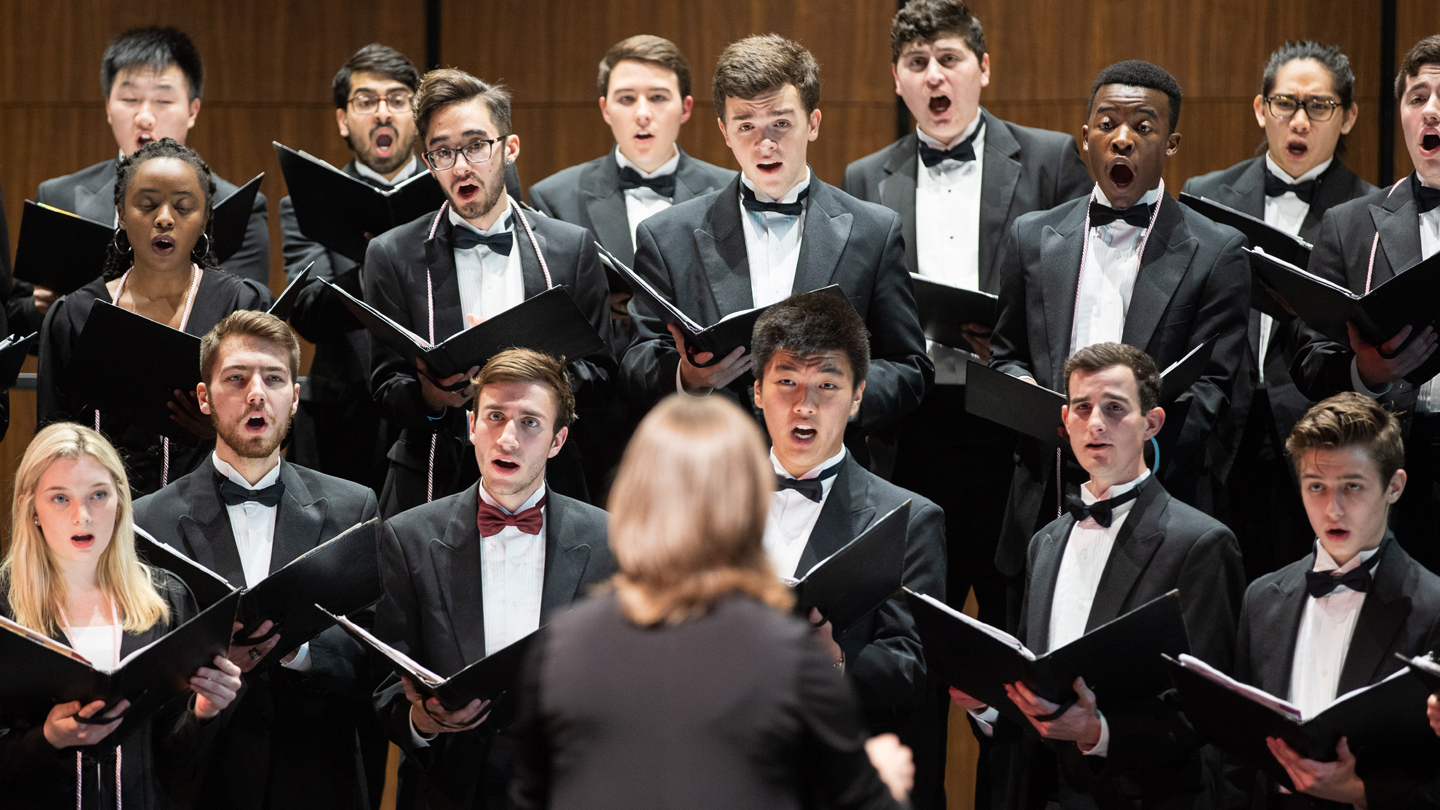 The new Kirby Art Study Center in Williams Center for the Arts is making the College’s art collections more accessible to students, faculty, and the public. Guests can now see in person thousands of paintings, sculptures, and other artwork formerly located in various locations throughout campus. A gift from Bennett J. ’79 and Meg Goodman of more than 1,200 photographs, dating from the mid-19th through the late-20th centuries, has added a significant new teaching and learning resource.

Community workshop participants, film series attendees, children’s theater audiences, high school artists, and art collectors are engaged denizens of the growing and vibrant arts scene in Easton, which is prompting the formulation of the next idea: creating a comprehensive brand that will unite all that is happening in arts to help both experienced and budding connoisseurs find what it is they seek.

“Community members may have sought a performance as part of the Tapestries series on contemporary Muslim arts and cultures,” Kelly says. “Or maybe a prospective student who may not have considered Lafayette now recognizes the vital and vibrant programs. We have one of the nation’s premiere undergraduate liberal arts college programs in the arts.”

A Sample of Noteworthy Successes

Buck Hall was made possible through a major gift from William C. Buck ’50 and his wife, Laura Buck. The Daniel H. and Sandra Weiss Black Box Theater is named for the former Lafayette president and his wife, thanks to a gift by the Board of Trustees honoring the couple. The film-screening room is named in honor of the late John W. Landis ’39 and Muriel T.S. Landis.

The naming of Kirby Art Study Center recognizes a gift of $1.5 million from Allan P. Kirby, Jr. ’53 GP ’20 through his foundation. His philanthropy recognizes the legacy of his father, Allan P. Kirby 1915, who was responsible for establishing the College’s extensive art collections. An additional contribution was made by the F. M. Kirby Foundation, Inc.