Throughout her lifetime, Dina Manoway ’83, director of business processes at Victaulic, has made a difference for our world by responding to her pain by protecting others.

Manoway has been blessed by her family, which includes five siblings. While she loves her family, being part of a large family became a barrier to her realizing her dream of being a doctor. Although she started as a pre-med student, she felt that she had to conclude her pre-med studies because her parents were very limited in their resources. 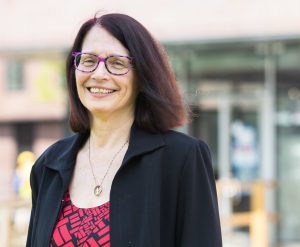 What precipitated her decision was when Manoway, unknown to them, overheard her parents talking about their financial concerns. “I heard them ask each other, ‘How are we going to pay for Dina’s second year at college?’” Manoway recalls. “They decided to take a second mortgage on their home, and they were going to cash in my father’s life insurance. Those decisions would have given them enough to get me through my pre-med studies.” While she had a heartfelt desire to be a physician, Manoway did not want to compromise the financial well-being of her loved ones. She waited a few days, then told her parents she no longer wanted to continue as a pre-med student and was going to approach her part-time employer to request she be hired full time.

Working full time, Manoway also took courses in the evening at Northampton  County Community College. After a short time, she transitioned to being a full-time student there and continued to excel in her studies. In 1977, she graduated with a 4.0 GPA and an associate degree in science.

The associate degree paved the way for her to launch her distinguished career as a metallurgical supervisor at Victaulic. Manoway was invited by Victaulic’s leadership just six months after her hire to accept an offer to pay for her to continue her education and earn her degree in metallurgical engineering. Her employer allowed her to choose either Lafayette or Lehigh. Even though both of her uncles had graduated with engineering degrees from Lehigh, she fell in love with Lafayette because of the transformative learning opportunities the College’s faculty creates for undergraduate students, and she chose to study on College Hill.

Manoway began her studies at Lafayette in 1978 while working full time at Victaulic. In 1979 she married her husband, Michael Manoway, who was supportive of her studies.

Manoway admits that the engineering discipline was a challenge for her. “I wasn’t an engineer by design. In fact, the joke between me and my husband was that he should have been the engineer, not me,” she says. Manoway credits her success at Lafayette to the extraordinary support she received from faculty.

She tells the story of Charles L. Best. “I took this Statistics course, and it was tough. I had Dr. Best, and he was great,” she says. “Every Tuesday night we would have a quiz, and every Thursday night anyone with a 60% or below had to go to the board and do the problem, not as punishment but because we helped each other.

“After a second week of thinking, ‘This is not sinking in,’ I talked to Dr. Best after class. He said, ‘I will work with you.’ So he made time to meet with me based on my work schedule and my school schedule. And, he kept telling me, ‘Dina, don’t stress out. You are overthinking it. I’m telling you, just keep at it and at some point, a light bulb will go on in your head.’

“Every week, I was at that blackboard on Thursday. Dr. Best never gave up on me. Then the final came. I started working on the first problem, and I got it done and thought, ‘That wasn’t too bad.’ So I flipped the page to the second one. Pretty soon I am flying through the final. Dr. Best saw my happiness and came over and said, ‘The light bulb went on, didn’t it?’ I smiled and handed the final I had just completed to him.”

After grading their exams, Best sent Manoway and her classmates a postcard reflecting their grades. On his mailing to her, he wrote, “Dina, you got an A minus on the final. You did the best of anybody in the class. I told you that the light bulb would go on.” As she reflected on what he wrote, Manoway thought, “Wow, they care. They care about a student who is nontraditional. For him to have spent all that time with me and notice my struggles, that says a lot.”

Manoway has continued to realize her dream of supporting the health of others. She has served for three decades on National Ski Patrol, was a director for Camelback Ski Patrol, and served as Pocono section chief for the Eastern Region of National Ski Patrol. She also is a CPR and AED instructor for American Red Cross of Monroe County.

However, in 2010 her husband was diagnosed with gastric cancer. After his courageous seven-month battle, he died in January 2011.

Manoway responded by creating an opportunity for Lafayette students to make a difference in the world. The Dina Uliana Manoway ’83 Scholarship Fund in Memory of Michael T. Manoway supports those struggling with the financial challenge of realizing their dream of becoming a physician.

Manoway says the scholarship honors her husband for the amazing man he was and hopefully will pave the way to supporting the health of others. “Mike was a great guy and a fighter. I want somebody else to have a chance and an education that maybe will find a cure for cancer,” she tearfully says. “Maybe the scholars who are awarded this scholarship, which I have created in his memory, won’t find a cure for cancer. Maybe they will find a cure for somebody who needs their help. In responding to this devastating loss, this scholarship is something that I felt that I just had to do and wanted to do.”