Anna Eisenstein ’13 and Andrea Smith, professor of anthropology, work together to articulate Easton’s past 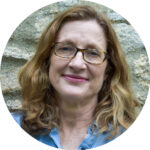 Anna Eisenstein ’13 (’20 Ph.D., anthropology, University of Virginia) and Andrea Smith, professor of anthropology, share how they found connection in co-authorship, why they focused on Easton history, and what they learned from each other.

When did you first connect at Lafayette?

Anna: We first connected in Professor Smith’s ‘09 FYS course, The Sounds of Silence, in which I was a student. That was my first introduction to anthropology, and I loved it! Professor Smith had already started collaborating with community members and previous students to look into Easton’s history, so when I came along and was constantly showing up at her office hours wanting to learn more about anthropology, she invited me to start following some of the leads she already had.

How did your connection and that mentorship grow between the time you first began working together and when you decided to work on the book together?

Andrea: During her first semester at Lafayette, Anna asked for additional readings in anthropology, including ones I had written. When I gave her a few, she not only read them, but also pointed out similarities in what I had observed with French settlers of Algeria and what I had been finding in my work in Easton—parallels I had not noticed! I saw she was an astute reader of complex texts and eager to learn more about anthropological research methodologies. I asked if she would be interested in working for me as an Excel Scholar, and she agreed. The more we worked with Eastonians, the more people came forward with stories to tell, and the more complex and interesting our findings became. I first thought we might produce an article together and had no idea that our work would culminate in a book manuscript. The accessibility and flexibility of Lafayette’s Excel funding structure helped make this research process possible, which would have been difficult to carry out at a larger institution.

Your book, Rebuilding Shattered Worlds: Creating Community by Voicing the Past, focused on research with former Easton residents and displacement from redevelopment projects in the 1960s. How did you decide to make this your focus?

Andrea: In seeking projects for students on social memory-related questions, I met with Jane Moyer of the Northampton County Historical and Genealogical Society early in the 2000s. She was quite clear that the story of Easton’s Lebanese neighborhood, known as “Syrian Town,” was a topic meriting further attention. She described its multiracial character, and as I started exploring this topic (with Rachel Scarpato ’08), we quickly learned that this is what so many people in Easton wanted to talk about. The research at that point just took off. Rachel and I published an article about the neighborhood’s removal in 2010. By that time, former residents kept wanting to meet, and Anna was looking for a project. The timing was perfect, and I brought her on board.

What was it about the mentorship that made it really work for both of you, and what did you learn from each other in that time?

Anna: In many ways, our mentor-mentee relationship was like an apprenticeship. When we first started out, I had a lot of reading to do to gain a basic familiarity with Easton’s history, and to catch up with the work Professor Smith had already done. As she moved around Easton and interacted with local historians, librarians, and members of the former Syrian Town, I became like her shadow. During those excursions, I took in a ton of information about anthropological research methods. As time went on and she guided me through hands-on research experiences, I gained more proficiency and confidence interacting with our research participants and with our data.

Before embarking on the book, we wrote an article together, and we gained a lot of insight as we engaged with the peer reviewers’ comments. As we sat with the article, and continued seeing our research participants’ energy and enthusiasm for the project, it became more and more apparent that we had a lot more to say.

Publishing a book can take a tremendous amount of time, including edits and rewrites. How did you handle this process together, and in that time, did you learn anything new about each other?

Anna: By the time we began working on the book in earnest, I had graduated from Lafayette and headed to the University of Virginia to pursue graduate studies. I think we succeeded in writing together—even from a distance—because we were both committed to it. We both honored deadlines and didn’t make excuses. And even more importantly, Professor Smith was always extremely encouraging and gracious in the book writing process, allowing me to plug in and write the parts that I was the closest to, while she handled writing the more historical portions of the argument, and led the way with the theoretical framing. Her pragmatic and kind approach to embracing what was necessarily an unequal partnership—that’s where the magic was—she was willing to let me do what I could do, even though it was not equal to what she could do. I give her so much credit for allowing me to continue to be involved with the project, even when it probably meant more work for her!

Andrea: Anna has always been an excellent writer. She is also organized and conscientious, and while we embarked on the project, she was able to sort out which sections she felt comfortable with, and communicated clearly when she wasn’t so sure about an observation or a theoretical application. We started by writing individual fieldnotes on the same experiences and comparing them. She also developed annotated bibliographies on challenging theory readings in cultural and linguistic anthropology. As we began to sort through and map out our findings, dividing the writing labor was easy, and putting together our separately written sections was really a blast. I’ve always loved collaborative research and writing, and working with her in this way was a joy from beginning to end.

Anna, how has the work that you have done with Andrea influenced your work and research during your time at University of Virginia? Andrea, has your work with Anna influenced any material that you’ve presented in the classroom?

Anna: My work with Professor Smith gave me a deep appreciation for linguistic anthropology as a powerful suite of analytic methods. Although the topics of my own graduate research differ from the things I was working on with Professor Smith, I have remained inspired by her approach to studying social life through close attention to language, and I have taken up a similar approach in my graduate work.

Andrea: I have used the book with Anna in teaching several different kinds of courses—most recently, my Social Memory seminar. Students really pay attention when they realize that the assigned reading was co-authored by a near-peer, and when it brings theory to bear on a case study literally from their backyard.

What advice would you give to each other when it comes to navigating this “new normal” of teaching and learning moving entirely online?

Anna: Professor Smith is extremely committed to her students’ success and a master at communicating via phone and email, so I know she will carry out this shift with her characteristic grace.

Andrea: Flexibility is key in teaching, and this is even more the case in today’s bizarre circumstances. I have been adapting my Social Memory course so that students either interview individuals virtually or work on projects involving family members. To consult on student research papers, I’m conducting multiple individual one-on-one conversations via Google Meet to provide focused guidance.