She was a neuroscience major with med-school plans. Kristen Gibbons Feden ’04 is a special prosecutor who takes down criminals, most notably Bill Cosby

The conviction of Bill Cosby is considered by many to be a watershed moment in women’s history, one that has helped further propel the cultural awakening known as #MeToo.

At the center of it all is Kristen Gibbons Feden ’04, a 35-year-old prosecutor who was instrumental in the jury’s decision to convict Cosby on three counts of aggravated indecent assault.

Feden was involved in the Commonwealth v. William H. Cosby since day one. But it was her powerful, hardline closing argument against the iconic entertainer that thrust her into the national spotlight. The New York Times reported that her remarks would have gone “viral” had cameras been permitted in the courtroom.

For Feden, it was a case of unfinished business. 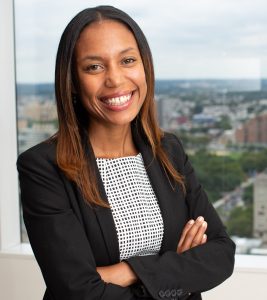 Feden was on the prosecution team the first time Cosby went to trial in 2017. She was a member of the sex crimes unit and head of the elder abuse unit in the Montgomery County district attorney’s office when Cosby first faced sexual-assault allegations. Feden delivered the opening remarks and questioned the victim and witnesses in that trial, which resulted in a deadlocked jury and was therefore declared a mistrial.

Three months later, she left the DA’s office to join the Philadelphia law firm Stradley Ronon Stevens & Young. (The firm recruited her after she was featured in Philadelphia Business Journal’s “40 Under 40” list.) She accepted the new role—with the understanding that she’d be able to take a leave to rejoin the prosecution for Cosby’s retrial.

On April 26, 2018, a Philadelphia jury found Cosby guilty of three counts of aggravated indecent assault for drugging and sexually assaulting former Temple University employee Andrea Constand. The fall of such a once-beloved star sent shock waves—and not just in the entertainment industry. Lafayette’s Board of Trustees, joining many collegiate peers, decided to revoke Cosby’s honorary degree as a result of the conviction. Victim and women’s rights advocates consider the conviction a monumental victory for the break-the-silence campaign against sexual misconduct.

Life has returned to normal for Feden, a mother of two who is focusing on securities law, employment discrimination, educational law, and is hoping to conduct Title IV investigations at Stradley Ronon. We chatted with Feden about the courtroom experience, being part of #MeToo, and what she hopes people learn from the trial.

You’re an experienced trial attorney, but this was an incredibly high-profile and closely followed case. Did you feel pressure from that?

It was tough. It was absolutely scary. But to be honest, I feel that with every case. I’m scared every time I enter the courtroom. That’s because you are dealing with people’s lives, and that’s a tremendous responsibility. You don’t want to make an error that would cause an issue that would require the case to be tried again. Once I am there, and I’m talking to the jury, then I am fine. All the nerves disappear. I go into every courtroom knowing my case inside and out, which I certainly did with this one. When I know I am fighting for a good cause, it makes it all the more easy.

After the first trial ended with a deadlocked jury, how important was it for you to be part of the second trial?

It was really important to me. After the first trial, I was interviewing at Stradley Ronon, my current firm. They knew that I would want to come back and finish the case, and they said no problem. They were so supportive and flexible and patient. I’m so grateful I was able to see it through. I was sad that the first trial ended in a hung jury, but my disappointment was really for Andrea. I wanted to go back and be by her side. I had told her I’d go back and be with her to support her even if I wasn’t on the case.

The New York Times reported that your closing argument “sent a jolt through the courtroom.” To what extent were your remarks prepared; how much was in the moment?

Whenever I give a closing argument, I like to have a PowerPoint. I think it helps hold people’s attention. So to a large extent, it’s prepared in advance. I might have 20 slides that I’ll go through in chronological order, and I’ll add to it in the moment. But, I’ve got to be honest, I didn’t expect the defense attorney to say what she said. Miss [Kathleen] Bliss said some really nasty things about the victims. That infuriates me as a sex-crimes prosecutor. These victims don’t deserve to be treated in that manner. They deserve a certain level of respect. Victim shaming and blaming is just inappropriate. I was just appalled. These people had to relive their trauma and then be subjected to a level of humiliation from that defense attorney. They should not have to face character assassination. So when I stood up, I was overcome with emotion.

What do you hope people take away from the trial?

I want people to understand that when a sex crime goes to trial, that person has already undergone a tremendous and courageous journey. In some cases, they’ve been through an invasive medical examination and a police investigation. When #MeToo started, there was this reaction, this attitude like, “Oh, here’s another one, another woman lying and seeking fame.” That angers me. Who wants to get famous for this? Who is getting money for this? Very rarely do victims get settlements, and if they do, it goes to pay for counseling services. They are not getting rich, I assure you. They are not compensated for all they endure.

I also think the trial helped educate people. We had a victim expert testify in both trials. They educated the jury, and because the media was covering the trial, they also educated the public as a whole. They explained what types of behavior sex-crime victims display. People are sometimes looking for an explanation: Why did she call him back? Why didn’t she run away? These experts explained how victims feel so embarrassed, and how they are often trying to normalize their lives. So they might behave in a way that is contrary to how you’d expect them to behave. They explained that’s a common response; they often behave like the act didn’t happen. I hope that people might better understand how victims react so there is less judgment and shaming and more understanding.

How do you see this trial in relation to the larger #MeToo movement?

It’s important to be clear that this was just one trial and just one victim. But I think the trial did raise awareness, which is a big part of #MeToo. I hope the trial will give credibility and legitimacy to those who do come forward. Sex crimes are so underreported. I hope that it gives courage to victims who might need a little nudge. That’s important because another victim that comes forward is one less perpetrator on the streets. That’s one less perpetrator for you or me or our kids to possibly encounter.

You were a psychology/neuroscience major. What prompted the change in career path?

I have always had a passion for caring for people, and my dad is a physician so going into medicine seemed like a natural path. But then my sister, who is a year older than me, went to medical school and started giving me insight. She reminded me of how much I didn’t like blood and said that might be a problem for me. I realized that medicine probably wasn’t the right fit. I think I knew that my heart wasn’t fully into it.

What attracted you to the legal field?

At Lafayette, I did a lot of service-oriented work. I worked with prisoners at a correctional facility. I educated them about their rights and assisted them in their job searches.
I developed a passion for this type of work and decided that I wanted a career in which I could be of help to others.

At Temple Law School, I thought I might want to be a patent attorney or work in the criminal justice field. I was a big fan of Law and Order SVU. That show influenced and sparked my interest in working in a district attorney’s office. I loved watching how the detectives and the prosecutors collaborated and worked together to help the victims. That made me want to pursue a job in the Philadelphia DA’s office.

Did the show prepare you well?

Oh, it’s very different. On television, it’s a fast process, and it’s definitely not that way in real life. But I do think that Law and Order did a great job capturing the relationship you develop with the victim, and that’s a big part of the job, an aspect of it that I am passionate about. You need to build a rapport with the victim. They need to trust you and feel comfortable with you. You are going to ask them to talk about very personal things in a public forum in front of a room of strangers—the judge, the jury, the other attorneys, the public, which can sometimes include the media. That’s a very difficult thing to ask someone to do. It’s essential to have that relationship.

Do you use your science education at all?

Absolutely, yes. My science background has really helped me. It is not lost in what I do. My career started out with sex crimes. It’s important for me to understand the scientific terminology that is often involved in a case. Sometimes there is DNA evidence. Some of the cases I prosecute are drug-facilitated sexual assault, and it’s helpful to have an understanding of how drugs affect the brain. My science background enables me to understand the scientific terminology that an expert witness is using and be able to speak to it and relay it back to a jury in a simple yet credible way.

How did sex crimes become your focus?

As a law student, I spent my first summer in the DA’s office, where I got assigned to the family violence and sexual assault unit. From those experiences, I knew it was what I wanted to do. There are so many types of cases. But in a lot of them, I was representing people who didn’t have support. When it’s a child victim, the perpetrator is often a parent or a family member or caregiver or someone in the family’s community. Those victims were alone. I think that’s what drove me to want to continue with those types of cases: I didn’t want them to be alone. I wanted to help them. I still work to advocate for victims of crime, specifically domestic violence and these types of cases, but that’s only one type of case I handle. I also do employment and labor, health care, and securities litigation.

How do you manage the stress of your work?

I like to run and work out to decompress. The real key though is my support network. I have a very supportive family and wonderful friends. My husband is a federal appellate attorney, which is very helpful. He always helps me prepare for my trials.

How do you feel about raising sons in the #MeToo era?

I am so proud to raise my two sons, who are currently 6 and 4, during the #MeToo era. The #MeToo era is all about challenging the prevailing norms and providing support to those in need. It also is about respect. Raising my children to be respectful, caring, and empathetic is my top priority. I believe this will equip them to appropriately challenge any prevailing norms that exist to hold people back and have the love and respect to help raise the spirits of those in need